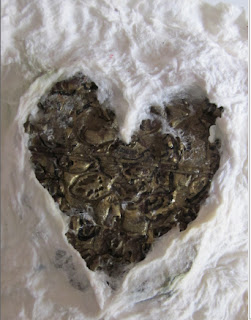 A photo blog today. I have been working on the next lessons for readers of my Dissolvable Delights book. It's hearts all the way - perhaps because I love embossing powder! 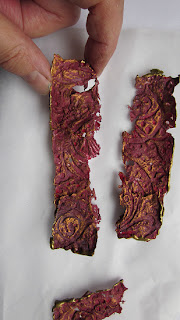 Dissolvable paper is also close to my heart. I am working on a border here.

Really hoping that a free video will be up on the d4d blog (d4daisychains.blogspot.com) as part of this lesson.

I have been asked to make a video instead of a book for my next d4d project. What do you think - are they as good as books? I thought perhaps a video with a series of free workshops to do more step by step stuff might work. I think unless you run the video while you work you tend to forget the techniques. Let me know what you think and I'll give some stuff away to those who reply. 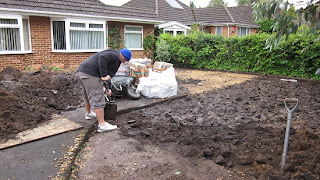 We have a new patio - thanks to Mark and Scott, who did a great job. We were just going to get the tarmac relaid but the quotes were astronomical so we went for gravel and a patio.

You can see the patio, below. I mixed two colours and I love it. 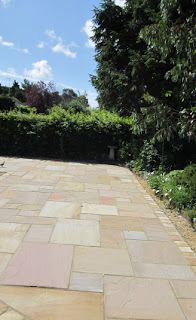 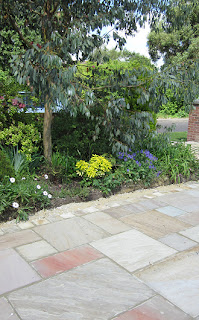 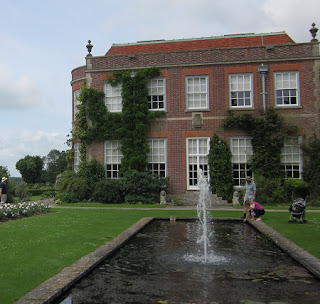 
Hinton Ampney has a wonderful garden and the plant stall was tempting.

Shouldn't have bought the catnip though as Smudge has destroyed it. 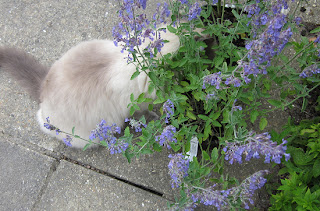 I think I’ve already bored you with some of the singing stuff so you can blog off now, with my blessing, if singing is not your bag. Comments on the last blog appear at the end and anyone wanting stitchy stuff can head over to www.d4daisychains.blogspot.com the blog that goes with my latest book.

We had a most fabulous day on Saturday at the Stourhead Festival of the Voice. Stourhead is a National Trust garden, not far from us  (in my book it is one of their best) and for the Festival they bring in twenty-two choirs, all very different, and each one gets a twenty minute slot in different parts of the garden. This is a pic of the Gasworks choir from Bristol – very professional and a great sound. 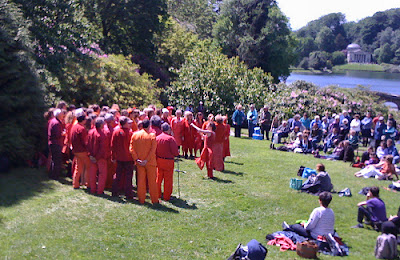 We went with Jane Wild and met up with our choir – Local Vocals. The whole day was full of joy and laughter. Sounds a bit twee that, but it is the only way I can describe it – lovely weather (eventually), great company, lots of laughs, good grub and we sang well. We do a real musical mix of songs from rock to Georgian drinking songs and our leader, Lesley, is so clever. No need to read music – she just gets us straight into singing. It’s like magic.

Before Stourhead we sang at Wimborne Minster’s Jubilee celebrations. Although it poured with rain and we had to move into the Minster (lovely old Church) we were in good voice. Jane’s husband took the pics and you can see Jane and I clinging together for support and Clive, in among the bases. 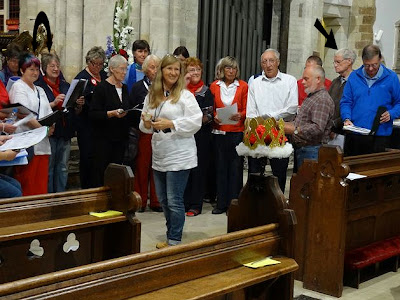 I do think it is hilarious that Jane and I are lip-synched in these photos. We must be getting the words right, if not the music. Not a good pic – too many screen grabs -but you get the idea. 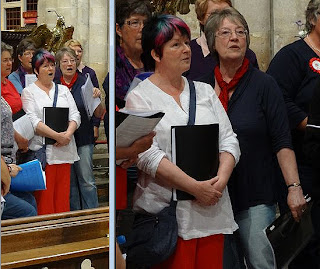 Finally here we are singing All Round my Hat. The last bit is the best with our sopranos on the descant.

I loved the warhorse, too Linnie – once again the commentators seemed at a complete loss as to what it was about.

Agree about the poor old Duke and the cold, Heather.

I’ve heard of a Marmaluke, wabbit but never seen one. It’s very easy to make friends with doggy people, I find, but we never know their real names. They were always Jojo’s mum or Sabre’s dad. One also had to suppress the desire to say, when meeting them in their civvies in town, ‘I didn’t recognise you with your clothes on!’ 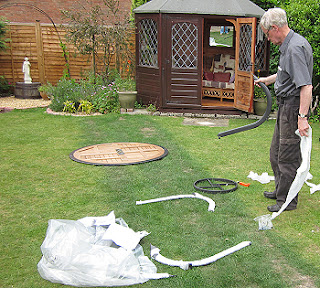 Our elderly garden table collapsed so we decided to get a new one as all the family were coming to a barbecue.

Contrary to our usual way of doing things we conducted extensive research (went to at least two shops) before winding up at B and Q. It duly arrived - in bits. 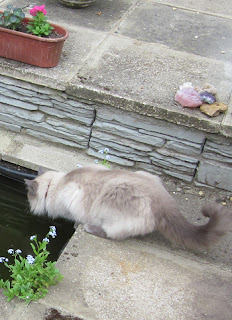 Smudge was not much help - after making a good start by tearing at the packaging with tooth and claw he resumed his narcistic (the spell check offers no help with that word) gazing into the pond.


He has taken to doing this and we are not sure whether he has seen a newt or is just obsessed with his undoubted beauty. 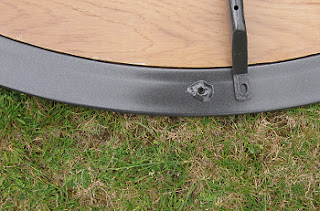 Finally the base was finished and the time came to screw it to the table top. In true B and Q fashion three fitted perfectly. But the last one .......

When a new hole was drilled we were finally able to turn it the right way up. And have a cup of (stewed) tea.

We made a rather pathetic effort with a string of bunting and some flags before rent-a-crowd turned up to eat us out of house, home and garden. 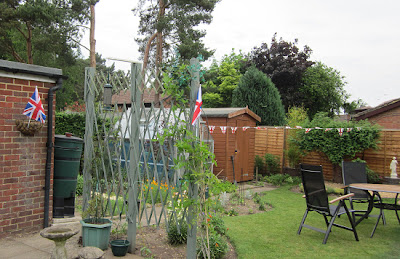 I meant to take photos of everyone tucking in but, in true British fashion, the rain came down heavily. This resulted in a rush for the house in which several of the smaller grandchildren were all but trampled underfoot!

Actually we still had a lot of fun and the lack of photos was more likely due to the sudden advent of dry white wine. I've not had alchohol for ages as I've been dieting and food comes way before booze in my calorie priorities.

Spent yesterday getting over it and watching the pageant on TV. BBC coverage was poor, I thought - too many talking heads in the studio and not enough about the boats.

Great effort though - did you see the embroidered banners? Rachel de Thame's planting was wonderful too, and what can you say about HM?  I bet she's shattered today and she still has Madness on her roof to look forward to tonight.


Comments
Patchacha; glad you are enjoying Lynda's free classes. She's a great tutor.
We are lucky, JP. We do have lots of textile stuff in our open studio weeks. I'm just sorry that it doesn't look as though we will get to any more of them.
I'm not sure about the bras either, Heather. If they were decorated it would look good but, as it was, it looked a bit like a convent washing line.
Posted by Maggie Grey at 09:51 3 comments: