The book give-away has happened and all winners have been notified and sent books. I feel it was a good way to pass on books so there will be another chance when I get to Billy bookcase in the garage. That is overdue a sort out.

With my 'President of West Country Embroiderers' hat on, I went to visit Swindon branch. I am going to try to drop in on as many branches as I can when I am 'Ite and abite', giving talks etc.

Swindon is a very lively branch, led by Maggie Harris - a talented lady. They are a big branch with two groups - one which meets to do their own work and one has a monthly workshop. Very often it is Maggie and her talented second-in-command Margaret who lead these, although they do have some great tutors as well.

The day I visited they were mono-printing with acrylics. Here is Maggie, showing how it is done. 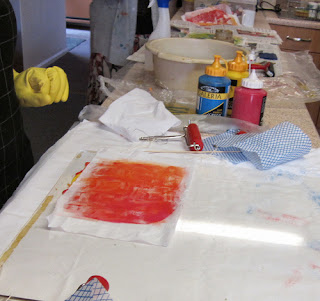 Maggie and Margaret made a great team. They had lots of samples to show and were awesomely well organised. Maggie and I used to run in-service training for teachers a few years ago (OK, quite a few years ago) so I know she is a great teacher. The end results were exciting and also gave good ideas for mark making. 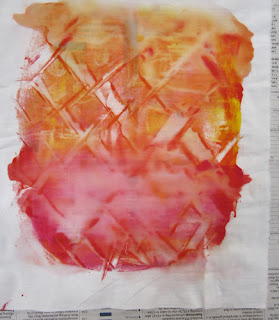 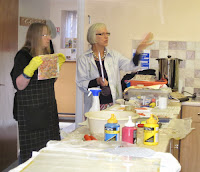 If you live in England's West Country and you'd like to find a friendly local group, do check out www.westcountryembroiderers.co.uk to find a group near you.

On the way home we popped into a National Trust for a cuppa.
The gardens were in very good shape for the straggle end of summer and there was some
spectacular autumn stuff going on. How about this colour combination? 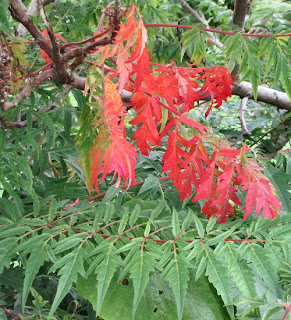 I am having such an interesting time with the next d4daisy book Approaches to Stitch:Six Artists. We have settled on that as the final name, having had Six of the Best as a working title. The work is coming in and it is exquisite. Don't panic if you are one of the artists - not deadline time yet. More on www.d4daisy.com

At the same time I am working on my next book, with Sam Packer and Paula Watkins. It is all about cutting - from simple punches to the Sissix-type die cutters and the sewing machine knife attachments. Here is part of a book using mixed media with a punch. So it is all go on the d4daisy front. 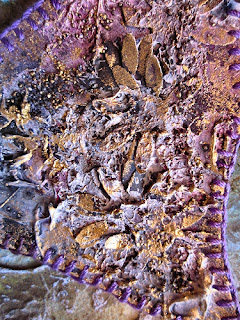 Smudge has been the star of a Facebook video, doing a 'Strictly' style dance as he goes through his tunnel catflap. He does have a little trouble with it and it is good for his exercise regime. So far, it has also stopped him bringing in livestock. Until yesterday evening when Clive was out. He makes an odd noise - like a ventriloquist - when his mouth is full of mouse, so I knew what was going on. I managed to prise open the jaws of hell and rescue it but it didn't look well so, in desperation, I popped it in the compost caddy with a brick on top. We opened it next morning expecting an ex-mouse but it had eaten all the compost and was very lively. So Clive had to take the bin for a walk down to the fields. Ruddy cat.

Thanks for comments - I did enjoy Chloe's work, too. Definitely a class act.

We went to an exhibition at the Russell-Cotes museum in Bournemouth today. It was by mosaic artist, Cleo Mussi and textile artist, Matthew Harris – a very talented couple. The exhibition showed work inspired by their recent trip to Japan. More on that later.

We were delighted when we arrived to find another great exhibition, also running, with work by one of our favourite artists, Frances Hatch. We have one of her limited edition prints, based on snow studies. 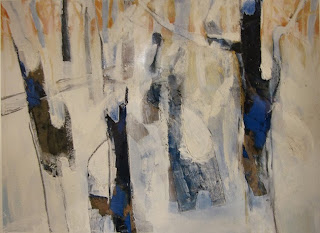 All the work was lovely but one particular piece took our eye and Clive grabbed the catalogue and looked up the price. Affordable, he said and I wasn’t going to argue. It did seem very reasonable and we double checked the price with the girl on the desk.  So we said we would have it and we were delighted when the manager guy  (in charge of taking the money) asked if would like to take it now as they were selling ‘off the wall’. We went to have a cup of coffee and excitedly planned where it would hang.

Then manager guy appeared looking a little shame-faced. He was very sorry, he said but there had been a mistake and a zero had been left off the price, Did we still want it? As this placed it well into the thousands we sadly said no and walked off (in a deflated manner).

We can now see the funny side of it but that bit of wall looks very empty.

Anyway both the exhibitions were good and the Matthew Harris work was great. Here are a few of his pieces. I think the titles are correct but I had forgotten my camera so had to use the iphone. the piece below is called Narita Bloom Cloth. 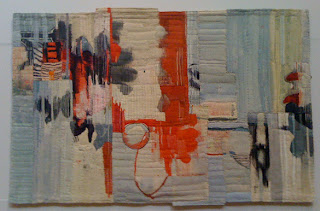 This piece is one of Cleo's mosaics - a wonderful depiction of sushi. 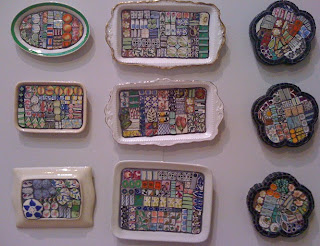 I also liked these two figures. Really lovely stuff. The notation on the wall pointed out that although textiles and mosaics appeared to have little in common, they were both built up from scratch. Good point, I thought. 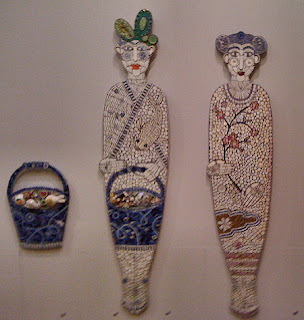 Finally another piece from Matthew. A detail this time. Matthew and Cleo were marooned in Japan when the Icelandic volcano caused all the hassle and it was obviously a very inspirational time. 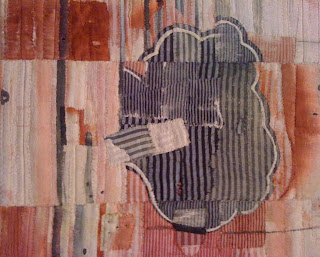 We had such a great time on Saturday sitting on Bournemouth seafront watching the air festival. The Red Arrows were amazing. 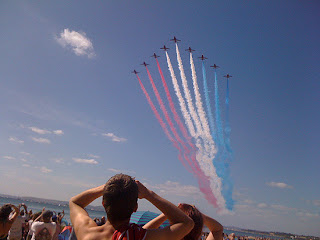 It was unexpectedly hot, with no sea breeze, so desperate measures were called for. Clive hasn’t lost the knack - see below. I resorted to a visor (tasteful) made from the Guardian magazine but I am not going to make a fool of myself by showing you. 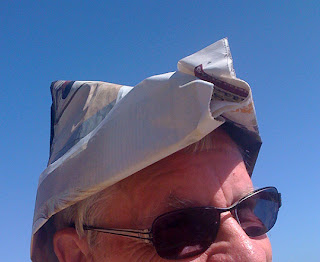 All the book-winners were notified by email and the books went off today so should be with you soon. I shall have some more later, as I am still sorting.