Great to be back

Well, that was a hectic few weeks but I'm glad to be back in action - or to be more precise, inaction, as I have a day off. So far this has been spent sofa surfing in a frivolous manner.

We had the photoshoot for the book yesterday and it was quite exciting as Michael suggested that, in addition to the free lessons that accompany our d4daisy books, we made a couple of videos, taking the book techniques further. So we had some trial runs and I think it will be good. They will probably be found in a new d4daisy blog as so many people don't like Facebook or Youtube. More details later. In the pic below I am in my makeshift workshop within Michael's studio. It was great fun making them.
. 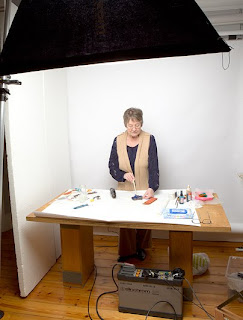 .
Jo Beattie has written a really lovely workshop for the March issue, on using faces in textiles. She is going to let me use this water-soluble piece for the book.
. 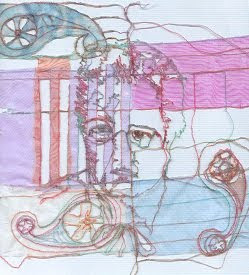 In between finishing the work for the book, we (we being Clive) have been decorating our bedroom - the last big piece of the bungalow refurbishment. Poor Clive - I fear it is rather a girlie room - my inspiration being a bag of sugared almonds.
. 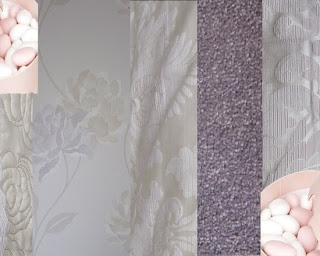 .
As the room faces east, it's quite a cold light, so it needed the dusty pinks to warm it up. Some pale lavender then crept in and the carpet will be a grey-lavender shade. Fitting that next week, so hope to show you the final result soon.

The room had patio doors that were very elderly and draughty so we went for French doors instead. This is the view from the outside as I didn't think you would want to see my washing. Oh dear, it is reflected in the window so you're seeing anyway!
. 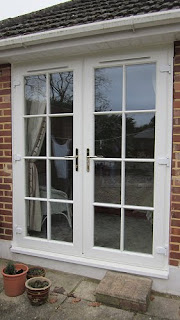 .
A new doorstep is needed, as you can see.
.
While the doors were being done, we took the opportunity to have a 'floating' cat-flap put in the back door.
. 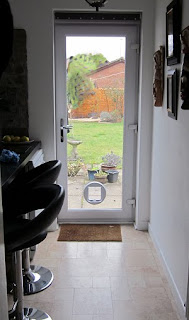 .
I fear it has rather ruined the look, but so much easier - the old one stopped working and Clive was fed up with being a cat butler.

Speaking of that cat, I thought that I would show you his response to the cold weather. Almost overnight he knitted himself a furry scarf. 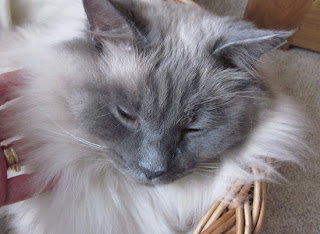 '
It is very impressive and hangs over the basket. Apparently Ragdoll cats change colour and grow ruffs quite late in adolescence - he is nearly three.
. 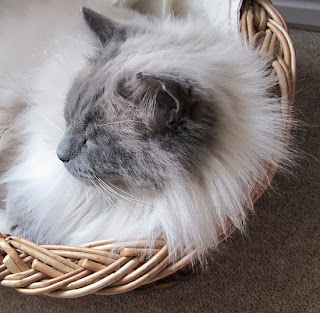 .
I asked him to smile for the camera but the result looks a bit scary.
. 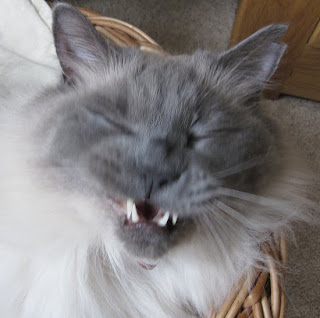 .
Sorry about all the cat stuff. Smudge pushes his way in everywhere.
Posted by Maggie Grey at 11:49 9 comments:

I am so impressed on several counts by your comments from the last blog. So many of you have all the d4daisy books and the fact that Sylviane translates WoW – that is a labour of love. Diane’s rusty stuff from the free lessons is great.

Not making a fascinator with my triffids but turning them into a vessel. 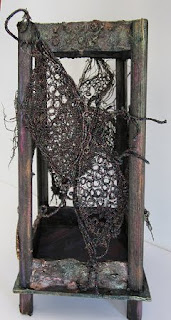 This is really a piece for the dissolvables book but it has turned into a workshop for the March issue of WoW as one of our expected articles didn’t come in and there was nothing suitable in my bottom drawer. Luckily I took photos as I made the vessel but there was a bit of panic going on, I can tell you.

It was the coldest morning of my whole life today but without snow (so far) so we went to our singing session at Local Vocals. We are practising for a concert where we get to sing with a big band – we are doing ‘Sway’ – and also a modern piece, in Dorset poet William Barnes dialect, with the Bournemouth Symphony Orchestra. It is part of an initiative called Chalk Legends http://www.chalklegends.com/#

I so love singing and find that it needs total concentration so there is no way to think of anything else. It is a great stress buster. At the moment Clive is the only man so he gets to do solos for the bass parts. If anyone one knows a singing type of man in East Dorset do send him along. It’s huge fun and you don’t need to read music or anything.

Well, the promised snow has not materialised but it is still bitterly cold. Nothing for it but to fire up the baked bean can and get the toes toasting. I'm so pleased with it and it chucks out an amazing amount of heat. Do love the black shiny effect, too. 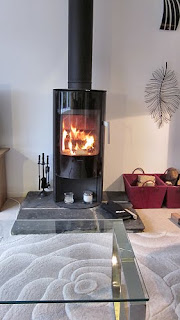 .
I might be AWOL for a few weeks as it’s going to be a very close run thing to get my new book finished before my thumb operation in late March. I will pop up on Facebook and try to blog in the bit between taking the photos and slotting them in for the designer. Think of me.