A Tribute to Jane Lemon 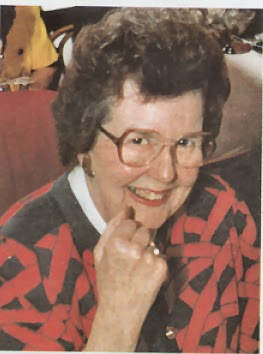 Jane Lemon died last week and, in many ways, this feels like the end of an era. I am proud to have had Jane Lemon as a friend and colleague and am very sad at this great loss.

Her contribution, not only to ecclesiastic embroidery but also in the secular field, has been huge. Her books on constructions such as boxes were immensely popular – not many people know that Jane once made a box for the Queen.

The one below, which she called The Drip, not only shows her talent but also her sense of humour. She gave me an image to use in my ‘Putting on the Glitz’ talk and it always raises a laugh. 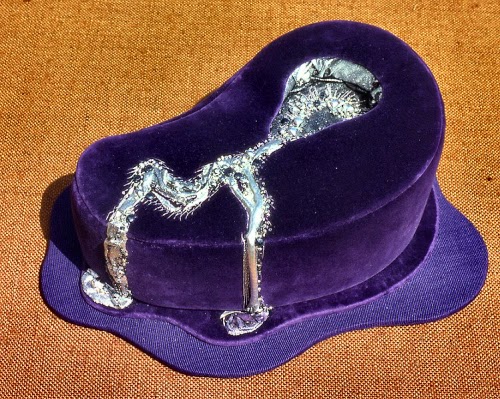 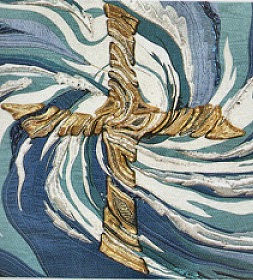 She led the Sarum Group of Embroiderers through the making of well over a hundred pieces of work, from alms bags to very high profile altar frontals.  St George’s Chapel, Windsor was one of their high profile clients.

My favourites will always be the Salisbury Cathedral frontals. The Festal frontal - see right - with its message of water flowing, like blessings, from the cross to the believer.

Also the Energy Frontal, below, with colours that picked up the great Prisoners of Conscience window above it.

She loved to talk about her days as wardrobe mistress for the Saddlers Wells Theatre Ballet Company and as a costume designer for television. This form of design gave her the ‘eye’ to work on the scale and tone which produced such outstanding designs for the altar frontals.

Upon her marriage in 1962, Jane resigned from the BBC and became involved in the Women’s Institute. Needless to say she soon began giving talks and leading workshops.  This brought her to the Embroiderers’ Guild, where she served on the Executive Committee for many years.

She was invited to join the Practical Study Group, (now the Textile Study Group). She became well-known for her books on embroidered boxes and metal thread embroidery. A lecture tour of Australia and New Zealand confirmed her front-line status.

In 1977, Jane met with Dr Sydney Evans who was looking for designers for Salisbury Cathedral and the die was cast. The Sarum Group, led by Jane, was formed in 1978 and the commissions kept coming. They included work for churches and cathedrals not only throughout the UK, but also in America. Their work is held by the cathedrals of St Albans (shown below), Exeter, Salisbury and Wells, plus Bath and Sherborne Abbeys. 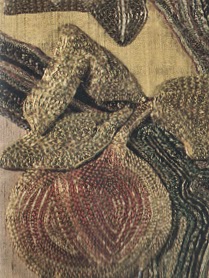 This talented group worked very well together and became close friends. Jane produced the designs and decided on the interpretation but members all provided their own special skills and these were much valued by Jane.

The frontal shown below, with detail on the right, was made for a church in Houghton, in memory of Mollie Collins - a Sarum Group member. Jane had a strong faith and a vivid imagination but she also had a great sense of humour. She liked to make the work relevant to the church family and always made a point of reading the church notice-board before she began designing.

Jane and I had a wonderful time on Val Campbell-Harding’s Historical Heirlooms City and Gulids course at Urchfont Manor in 2006. I think we were the worst students ever and caused as much havoc as we could. However, we both admitted that we learned an awful lot.

Jane was the President of West Country Embroiderers for many years and took an active part in running this lively group. The fact that she talked me into taking over this role two years ago is testament to her gift of persuasion, although I admit that I enjoy the group and their fellowship just as much as she said I would. 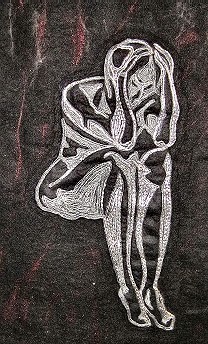 In 2011 Jane produced a series of panels for Amnesty International.  The theme was Prisoners of Conscience and celebrates the 50th anniversary of Amnesty. The series was displayed at Salisbury Cathedral and I reviewed this for Workshop on the Web.

You can see the review by clicking the link below.

For the last few years, I have caught up with Jane at a group that meets at the Kingcombe Centre in deepest Dorset. She has been a wonderful asset to this group (as she was to the other groups that she attended) and was always ready with ideas and suggestions. She was also inclined to give a prod if she thought you were slacking and neglecting your work!

Clive and I often went out for a pub lunch with Jane and were due to do so later this month - so sad to think that will not happen now. We shall all miss Jane immensely but I think it is safe to say that she was a tour de force who will not easily be forgotten.