Still on the Road

We've been on the road again - this time to Wolverhampton for a Regional day for all the local guilds.

There was a tense moment at the beginning of my talk when our laptop and projector played up - it was taking ages to change images. Good job Clive was there - turned out that the projector plug had worked loose and it was quickly sorted. Phew! The first time, in all the years we've been using digital images, that we've had a problem.

Had a fantastic time and had to judge several competitions. Such a high standard of work and I was glad that Pauline from the Guild was a co-judge. The theme was Frescos and Fragments and here is some of the work, with the young embroiderers first. Here's Stafford branch. 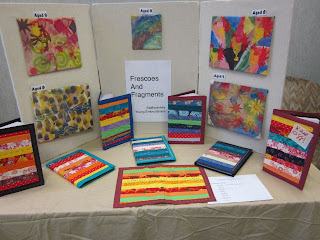 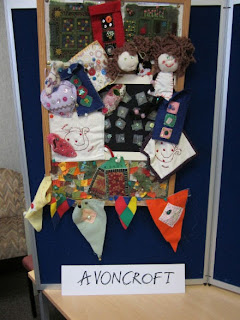 .
All were a credit to their teachers who are doing a great job bringing on the next generation of stitchers. This lovely piece won the adult section - so sorry but it was all such a rush that I didn't get any names. 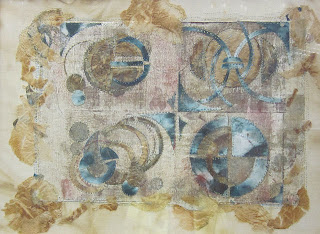 The next two were runners up. You can see how high the standard was
. 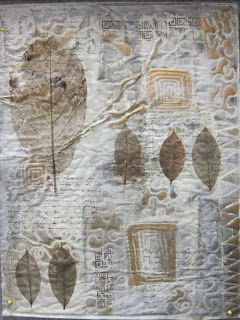 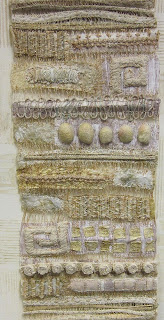 As you know I have become a gardner (ish). However I don't think that Alan Titmarsh would be impressed by my mishapen cucumber. Especially when I tried to use it in a salad and found that it was a marrow!
.

On a more serious note we are thinking of investing in photovoltaic roof panels as there is an offer from the government's 'green deal' of 43pence per unit generated. We have a sunny south facing roof, so should be OK. Has anyone done it yet - it seems too good to be true. All info welcome.
Comments - at the end, please note!
liniecat - yes that yahoo group seems to have been hijacked. It won't let me in to delete so I'm waiting for Yahoo to do it for me.

Stitcher - the college decided to stop supporting the degree course and the c&g tutors have moved elsewhere, such a shame.
Julie's sad news - I've replied privately but I'm sure she will find lots of support from the on-line community. Someone once told me, having just had that experience, that it was like losing a huge part of yourself and I can see that.
Glad you all liked the frog - you're very encouraging
Posted by Maggie Grey at 15:03 6 comments:

Had a little blog break due to excessive travel. In a week we did a talk at a Regional Day in Yorkshire (good fun but very small screen), went to the last ever Windsor exhibition (so sad but Jan and Jean were in good form) and then gave a talk to a delightful branch in Banbury. Just getting our breath back before it's the Madeira lecture in Wolverhampton on Saturday.
.

It's good to see such a positive response to the Guild these days. They really do seem to be sorting themselves out and the Vice Chair gave a good talk in Yorkshire (although I do wish the Guild head office folk wouldn't use jargon - the phrase 'delivery of service' always reminds me of the post office rather than stitch). However, they are taking the members seriously at last and we all want them to recover - it would be a great loss otherwise.
.
Windsor felt very sad, such a small exhibition this year. Here's a pic of some ofthe diploma work - those sample books are excellent. Can't show many pics as I forgot to ask permission. 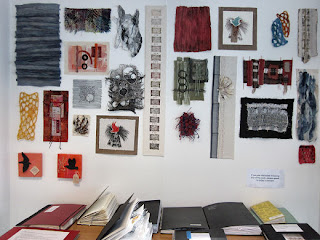 Do you remember my silly bird brooches?
. 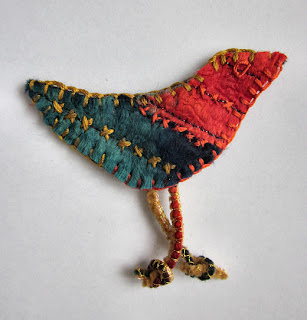 They sold really well at last year's Knitting and Stitching show so I am making some for the Festival of Quilts. At Maggie Hills' suggestion, I am also trying foppish frogs. Love his crossed legs.
. 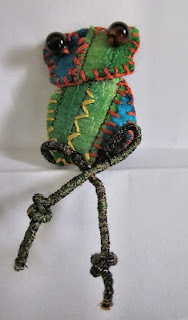 .
Good to have a small portable project although I'm not sure they are cost effective with all the hand stitching. However they are fun and with all this travelling I haven't had time to do any precious books.
.

Last week was further complicated by the arrival of many scratched tiles from Fired Earth. They had to go back, so the tiling has been held up. The blinds are fitted and looked rather plain so I'm sewing little buttons on the border.
. 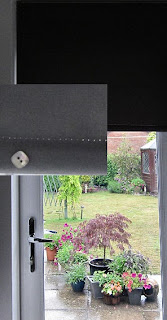 Comments on comments:
Thanks for all the positives about the books. I hope to show you one next blog.
.

Kim - about needles: when I was editing the Embroidery magazine someone wrote in about a French nun who had a mamogram and they found six needles in one boob! I think they left them there. So beware!
.
Virginia - congrats on your Diploma and keep wearing the bird. As you can see above the range has been extended.
.

Good to hear from you Gill. Tell everyone about Workshop on the Web - good for all those without access to classes and we have articles from Ken Smith, famous Tassie resident, from time to time.

Liked the cruet story,Gill. Wonder what the odds on that are?
Magaret – I’m also inclined to think that computer art is entirely justified. Think the problem comes when a photo has just one, very obvious, effect applied and I agree that you have to work at it.
Heather – it was only Pizza Express because we had loads of things to do in town and it wasn’t worth coming home. In the end, one of us had to wait in for a delivery so I went out and had a very late lunch at home.
Robin – it’s the safe places that are hard to find. We now use unsafe ones.Diane – sounds like the kitchen is progressing. I’m glad I decided not to rush ours as it’s very hard on the building guys if they have to be put back a few days because the previous one hasn't finished. Well done in the c&g btw.
Go for the red JP.
Sorry Scooter – I’ll go more for the non fiction version next time - a lavatorial fairy tale!
I have seen the carpal tunnel guy at the hospital and it is good news. He confirmed the diagnosis and offered the op but suggested that he injected steroids into the wrist to see what happened. If it works, I might get away without the op. That was over a week ago and it is much better so here's hoping it continues.I am off to the Yorkshire and Humber Regional day on Saturday with a new talk on Faces and Places. Really looking forward to it. When I was looking out work for the display, I decided to really sort out all my stuff. Lots of finished pieces that I use for talks - they fit well into categories and are no trouble. But I found loads of smaller bits, samples, tiny art works - all manner of things.
What to do with them? Too good to throw away and too different to stitch together into finished pieces, so I thought to myself, 'What about using them for a series of really precious books' with wonderful covers, each page really well considered with extra stitch or media added? Easy to store on a shelf, perhaps mounted as saleable art at exhibitions. Maybe the books would sell on Etsy or ebay. Possibly even a give-away or prize.I'm excited and now have a huge box marked 'STUFF'. 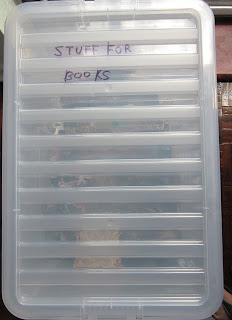 .
and here are some of the things in it. 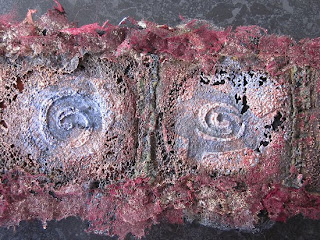 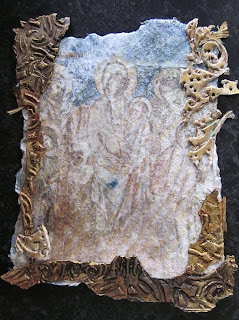 and garish ones (some toning down needed here) 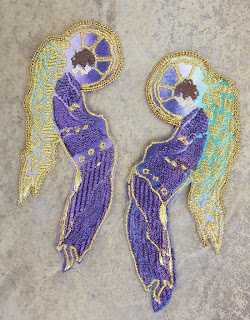 Lots of sweet little stitched patches. I think I took the design from a mask. There's even a needle and thread in this one. 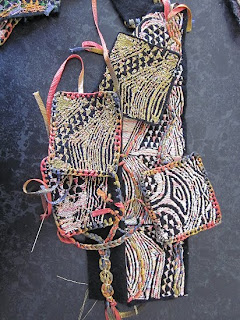 I also have the beginnings of the first book and I shall show you next time how it is going. What do you think? Will it work or just look like a bitty book?
Posted by Maggie Grey at 16:52 10 comments:

In Which We Lose Much But Find The Loo-People

Firstly – thanks for comments. Yes, the postman asks after the worms every day, Jean. They seem to have become a mascot at the sorting office. I envy you your worms, JP. I think our lack of worms might be down to the fact that we have so many blackbirds here (I thought they were territorial but ours have declared a truce).

Gilby – I think you are right and that the use of the computer can add a bit of oomph. However, lots of people think it’s cheating – anyone agree? I think your technology skills are pretty good, Heather – blogs, Facebook etc.

Glad you like the title, Gill – am I brave enough to go with it or will I chicken out? We shall see.

Yesterday was a really weird day. We are back in the kitchen (pure heaven) which means emptying all those boxes stacked in the garage. So really the day should have been filled with exciting finds but we seemed to spend it looking for things.

This was the first culprit.
. 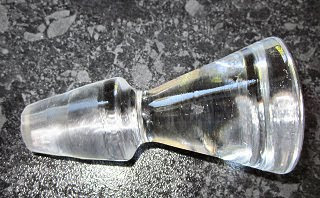 .
A perfectly ordinary glass stopper. This was discovered on Monday, all on its own and we both remembered it as part of a decanter that went to the charity shop ages ago. So out it went. Yesterday we found this. 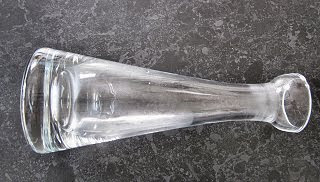 one of my lovely oil and vinegar bottles, minus a stopper. No problem, we said, it’s in the rubbish and we’ll soon find it. Many hours later, covered with old tea leaves and coffee grouts, we gave up. Hours wasted. Then I decided to take a break and write my blog. The camera was nowhere to be found so we both searched for that for another hour, to no avail.

However, searching in the far corner of the shed (OK, we’re desperate by now) I found the loo people, who haven’t been seen for years.
. 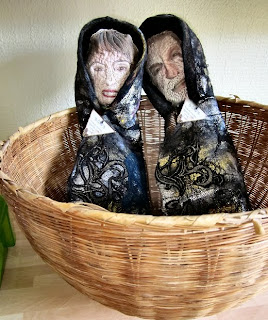 .
They were made as a joke for a daft Christmas competition which was based on the idea of making a contemporary version of the old fashioned toilet roll dollies. Do you remember the ones with crinolines which covered the roll? These two are the Grand Master and Mistress of the Sink Plunger and they were presented draped over large plungers with loo rolls down their shafts. They didn’t win but got a good laugh.

I think the heavy hand-stitching (over a photo printed on cotton) is quite interesting and might pursue it for more serious work.
. 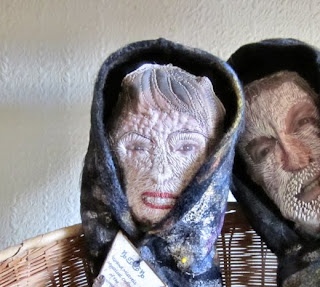 .
On the subject of loos, ours in the big bathroom is almost square. I liked the angular look of the basin and it came with a square loo.
. 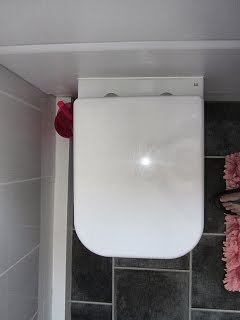 .
You don’t actually notice this fact when it is in operation but one thing made us laugh. When the plumber was fitting it he told us about a bathroom suite with a really square loo, called the Matisse. Clive and I went away and spent a hysterical ten minutes designing the Picasso loo.
Anyway, you’ll be glad to hear that, towards the end of the day the camera was discovered under the cat (Smudge was sitting on my desk in a patch of sun) and Clive found another rubbish bag and came in bearing the stopper.
. 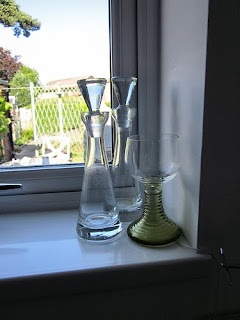 .
Then we found these beauties blooming away quietly, so all was well in the end.
. 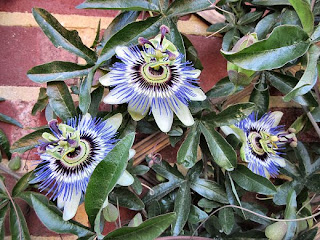 .
Here’s a couple of quick kitchen pics – not quite finished as we’re waiting for tiles and the blind man (remember him?) to come.
. 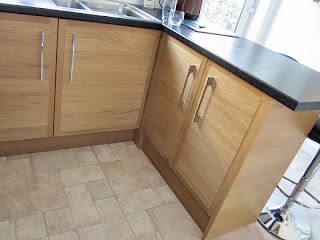 .
I am pleased with it – I had sleepless nights about mixing the black lacquered wall units with the oak (thought that was boring on its own) but it looks fine. What a relief. ..
. 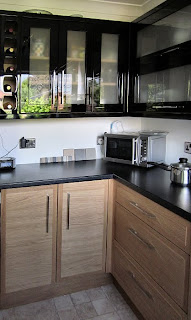 Difficult to photograph as it acts like a mirror. Will do better pics later - just off to do some shopping and have lunch at Pizza Express.
Posted by Maggie Grey at 09:21 10 comments: