Back from the Devon show after lots of adventures. Still catching up but wanted just to remind anyone who has Lynda Monk's Exploring Creative Surfaces book that the second free lesson is available. Just go www.d4daisy.com and click the free on-lone classes button.

Will be blogging properly in the next couple of days when my brain catches up with my body.
Posted by Maggie Grey at 15:21 1 comment:

Off to the Show

First of all, the give-away. I have addresses for Frances and Sandy for the giveaway but need Vicky and Lexa. I have a pack of Shrinky and some metal for you. Sending out has been delayed as 'staff', who does the sending, was delayed by the snow!

I am in a bit of a panic about going to the Exeter Craft4crafters show on my own but we are loathe to leave the house unguarded in this weather and the house-sitter is worried about leaving her own place unattended. She may still  make it so I have my fingers crossed.

I am so looking forward to working with West Country Embroiderers as I know that they have a lovely demo area and exhibition at the show. I am going to demo oiled paper, water-soluble stuff and pasta machine collagraphs.

I hope to get some work done at the show, making a start on the design below. It is a plan of a walk through the woods near our house with the main path depicted as a tree. On either side of this will be oiled paper prints, with stitching and there will be notes hanging from the branches. You can see the 'back of the envelope' version below. 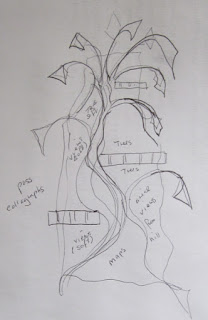 I did a quick colour rough of how it might look. This was rather fun so I hope it works as a larger piece. 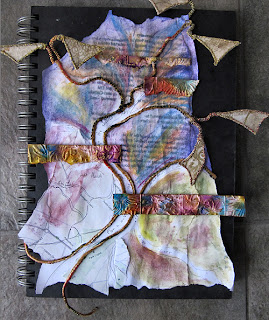 Some of the snow photos taken recently will be added. 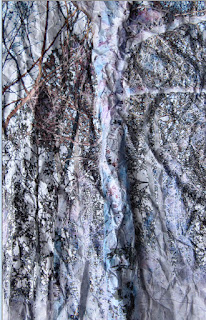 Getting packed is taking ages. It didn't help that Smudge ran off with the large lump of Vilene for the backing and tried to hide it under the bathmat. I really don't know how he lifted it. 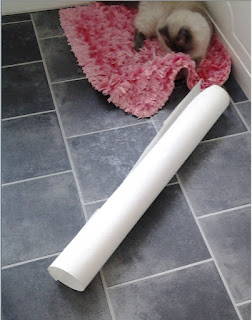 He hates the snow and has decided to resume his work for the RSPB by doing a bird count from the warmth of the windowsill. Preferable to his usual bird work, which involves culling. 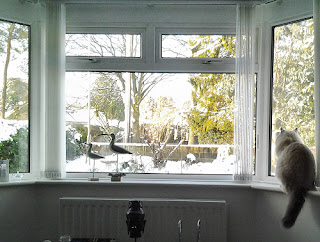 The snow was great fun for everyone but Smudge. We live very near the trail-ways (miles of open country) where people hike, dogwalk and cycle, but mostly they are sledging just now. I love watching them all go by and this pack of wirehaired Vizslas, below are frequent passers-by. Folk are always jolly and chatty when off to do something they enjoy, don't you think?

Do come to the show if you can. I would love to see you. 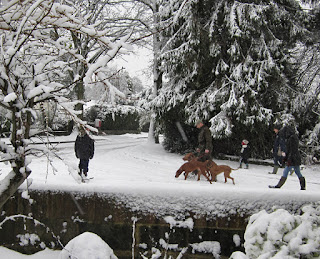 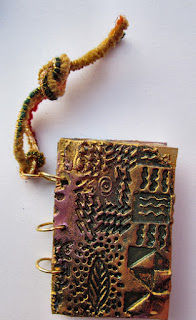 Phew! That was cutting it a bit fine, I had nearly finished the Shrunken Books Tute last night but today has been one of those days when everything took longer than expected. We had to fill in something silly for the bit of the bank that handles our e-finance and I had managed to forget all the log in details. Lots of time spent on the helpline. They sent the thing out on Christmas Eve so I tucked it away. We are usually quite organised about the business stuff so this really annoyed me.

Anyway here is the link for the little books tutorial.

I will put it in the proper place under the free tutorials tab a little later when I have a clearer head.

I have the four winners of the Shrinky plastic, metal and such stuff. They are (drum roll):

Send me your snail mail addys (maggie@workshopontheweb.com) and I'll get them off to you. Will add a little surprise as well.

I'd like to thank you all for leaving such lovely comments about the new blog. Before the next freebie class (and give-away results) tomorrow, I'd just like to answer some of the points raised in comments. Forgive me if I don't mention you all - it could take some time.


Getting ideas is never a problem, Maybird. It's the time to carry them out that is difficult.

Arlee asked about the oil staining the mount. I usually leave mine out for a while before mounting Arlee, but haven't had any problems so far. If it does bleed it might be that too much oil is in one place. Better to add a little at a time and work it in well. Some paper is more absorbent than others, so it is a case of trial and error.

Likewise Rosemary's point about the oil and the sewing machine. If the paper is backed I don't think it hurts at all. A wise old repair man once told me that a little olive oil on the needle prevents rust if you are not using the machine for some time. So, as long as it isn't too oily, no probs, I think.

JP - I'll certainly keep up the 'family and Smudge' side of the blog. It's the only way I can remember what happened last week. Smudge is cross because his cousin, Genghis Ken, has his own Facebook page. Genghis Ken owns Elli Woodsford (he refers to her as staff).


Amanda - dust is a dirty work around here. I am doing the blog now as a displacement activity instead of cleaning the house.

I'm glad it worked OK on the phone, Evie. Must try it on mine.

Hey, PJ - we are glad you found us, too. WoW is glad to welcome you.

Just to finish off with a Hi! to Gina - it took me a long time to get around to the new blog but it was easier than I thought. Look forward to your new look.

Judy - so glad you signed up for the C&G class. Did you enjoy it?

Think I have caught up now - see you all tomorrow.

Yesterday we had a fun morning at Eastleigh college, giving a talk to the degree course about starting your own business. They were a lively group and we had an interesting discussion about turning a passion (I refuse to say hobby) into a business. I think my secret weapon is Clive - couldn't cope without his technical and web skills, plus his ability to rein me in when I have too many good, but impractical ideas. Sometimes he needs to have a rest and I am not allowed to utter the phrase 'I've had an idea', for six weeks.

We all had some trouble defining exactly what my main occupation is: it seemed to boil down to being a good editor bit I'd hope it is a little more than that!

A lovely blog that you might like to look at and add a comment is droppedthehproject.blogspot.com  It is Alison Hulme's search for the missing letters in H & T that are so obviously missing in speech these days.
Her idea is that they are dropped on pavements, invisible to the human eye, See pic. 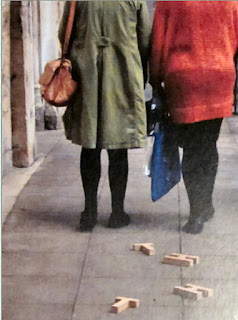 It's a fun blog and will give her ideas for her final degree show. Do have  a look.

I hope to blog again later and answer some of the comments on recent blogs. Tomorrow is the Shrunken books tutorial and the results of the giveaway so would like to do the comments first. But now it's the hairdresser and a bit of sales shopping - if there is anything left!

More Diary and the Giveaway 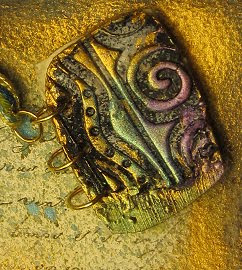 The giveaway will be drawn on Friday when I will also be adding the free class on tiny books, just like this one.

They are huge fun to make and the Beyond Stitch group that I belong to will be playing with them tomorrow. They are bound to come up with all kinds of new ideas.

We recently made a resolution to do more making in our meetings as we have gone so fay beyond stitch that we didn't do any - just a lot of chatting.

Apologies about the setting on this blog - blogger is really playing up. 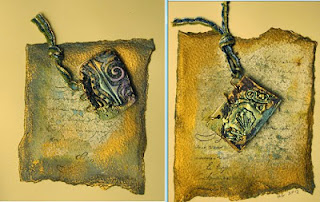 So still time to put your name on the list for some free sheets of Shrinking Plastic, metal shim and a some of my little books. You are welcome to add more than one comment but only one comment each will go into the hat.

I have been doing some more work with oiled paper - making it into one of my long diaries. I have blogged about these before, you probably remember. They are a visual record of trips (overseas and at home). occasions and so on. I use print outs and memorabilia, scanned, printed, backed and stitched. 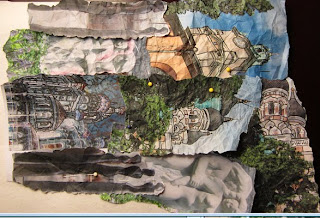 This time I have used some of the oiled paper pics from the workshop on the tab above (free tutorials). These are mixed with non-oiled and uncrumpled prints, pinnned to a heavy Vilene background. I am not sure that the composition is quite right as it's a bit dark in places. I also like to have a couple of quiet areas to compensate for all the business. 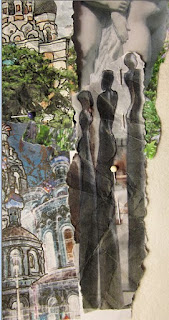 So a little more printing to do before the stitching begins. Most of the photos are from our Baltic holiday - particularly Tallin and Lubeck. I like the statuary, always good to bring figures in. 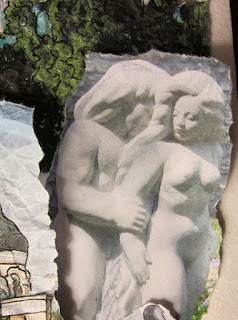 In a couple of weeks we will be putting up the free classes for those who purchased Lynda Monk's Exploring Creative Surfaces book. They are wonderful classes - and really work to extend the ideas in the book. Still time to get the book (you need 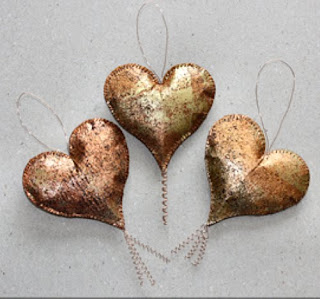 it for the passwords) from www.d4daisy.com