The book is almost here - another week or so should do it. It will be a close call for the Knitting & Stitching Show and Michael will probably have to bring me a couple of boxes up to Ally Pally but it should be there at some stage of the show. In the meantime here are a couple of spreads - it's looking good.
. 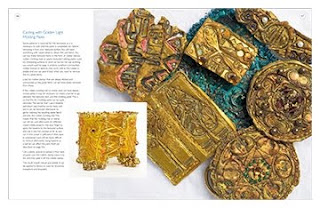 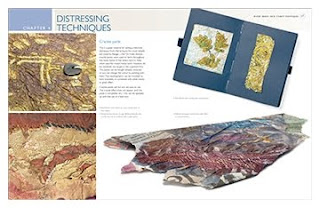 I am having a free draw and the prize will be this technique sketch book for those on the 'Let me know' list for the book. Just go to www.d4daisy.com and click on the Mixed Media: New Studio Techniques book cover and then click 'let me know' to contact Fiona and put your name down. No obligation to buy.
.
The book is about techniques for distressed surfaces using metal thread, dissolvable film, zappy felt and much more - as you can see. 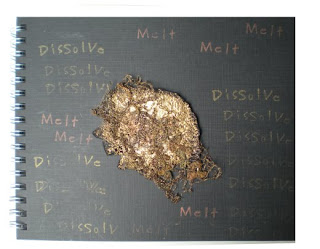 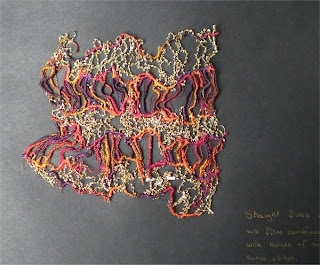 It rather hurts to part with it but I think that only things that you like should be given as prezzies.
.

I haven't quite finished with the flower stitcher so there's more next time. Have to go now as Aussie boy is here on a visit and we are taking him to see the prospective new abode. That is going well and we are all aiming to complete the deal towards the end of October so the threat of coming home from the show and moving next day has, thankfully, receded.
Posted by Maggie Grey at 08:58 9 comments:

More on the Flower Stitcher

I'm glad you are all enjoying the Flower Stitcher thread. Val would be pleased that it's getting another airing - I often think how much she would have loved blogging. She was an ace communicator.
.
Fibrenell - get into that book. I love the way Kate Atkinson weaves a story. You follow it through the eyes of several people and it is always a sign of a good book when you hate to leave the current character and move on. My all time faves with books are the Girl with..series and Audrey Neffeneger's time traveller and his wife (didn't care for her next one so much).
.
Interested to hear about the Japanese version of the Flower Stitcher, henred. Keep us posted.
.
Before we get to the next bit there is another Smudge thing. He is very active just now. We were taking a photo for my next article for Workshop on the Web (on oiling paper). It was a dull day so I was as close to the patio doors as I could get, balancing a board on a little sofa. Just as Clive was about to click, he noticed the tail hanging down from under the board and took a quick pic. Next minute the whole thing was upset and everything was everywhere.
. 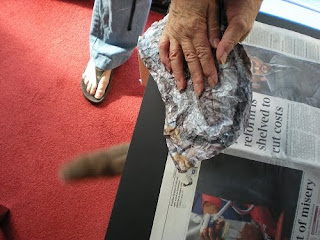 .
I left the board in place and he played there all morning. I did get some pics - watch for the article in December's WoW.
. 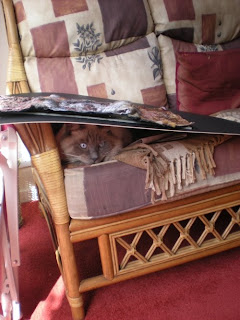 .
Try stitching massed complete circles or only semi-circles. Solid satin stitched circles can be cut out and threaded onto braids or cords. They could be folded along an edge, or wrapped around a cord.
.
Below. Satin stitch circles cut out and applied to felt with added stitching to secure them.
. 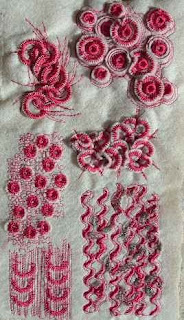 .
Below. Satin stitch circles cut out and applied to a painted and stitched fabric. Torn scraps of circles stitched on water-soluble fabric were added and secured with free embroidery in running stitch. 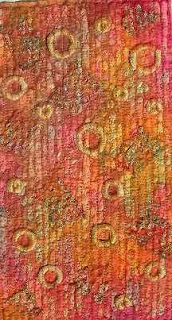 Below. Satin stitch circles cut out and applied to a solidly stitched belt.

.
Below. Tri-lobal nylon was spread all over felt and stitched with overlapping circles using straight stitch. The embroidery was melted using a heat gun. 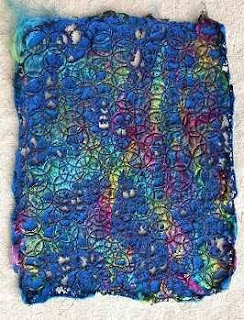 The pics are a bit small - we had more limited download speeds back then but I think you get the idea.

PS. We have to go to sign the contract for the house sale tomorrow - still trying not to get excited but our house passed its survey, so we are moving on.
Posted by Maggie Grey at 17:26 8 comments:

Fans of Kate Atkinson will recognise the heading above as (almost) the title of her latest book which I can thoroughly recommend. On this blog, it is the introduction to a Smudge story, after which we will begin the promised Val article on the Flower Stitcher.
.

People often comment on the timing of my morning emails and, yes, we are always up by 6am - but we do have breakfast in bed. This morning we were having a good relaxed breakfast when we heard the scream of a frog. They really do scream, very loudly, when pulled from the pond by a cat in hunting mode. Smudge has a very soft mouth and never hurts them but, obviously, frogs don't much enjoy the game of prod, prod, hop, hop that ensues.
.


So there we were at 6.15 today, two people in dressing gowns and slippers, chasing one cat and one frog around the garden. It was then that I thought what a great title it would make for today's epistle. The frog was safely returned to the pond and Smudge spent the next hour wandering round the garden in a state of 'I know I put it somewhere'.

.
On to the flower stitcher.
.


Before I forget, Dale has a great little book on the subject at http://www.thethreadstudio.com/
.


After Val demonstrated what could be done with the Flower Stitcher at the autumn shows, so many people ordered one that there was a distinct world shortage for a while and the factory in the far east went on double time. She was much amused. 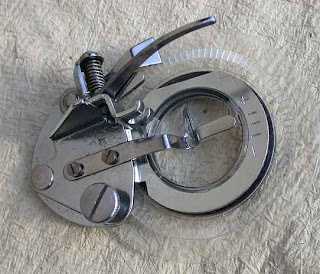 At the end of a year-long course on machine embroidery, I suggested that we try the feet and attachments that we had not used so far. Practising what I preached, I fished out a Japanese Flower Stitching foot that Janome used to sell for their sewing machines. Fortunately the instructions, though brief, were still there. The foot did not fit on the Janome 9000, but did fit the Bernina 180 using a Standard shank, and also on the Pfaff 7570. The Brother has an extension shank which will also fit the Janome 9000, but other machines do not need anything extra.

.
I did a few samples and then took it in for the students to try. They took it in turns and were immediately hooked. There was one panic on the first morning when the whole thing seized up, but some oil did the trick and we were away. This is important to know as it always seems to happen but, once oiled, the Stitchers do not seem to need it again. Try moving the lever up and down and put a drop of oil wherever metal rotates against metal.
.

Set up your machine as usual, and attach the Flower Stitcher with the lever on top of the needle bar.
Adjust the Presser foot pressure to maximum if you can. If you cannot, then use a thicker fabric. One layer of felt should be enough, but there might be trouble if you try stitching on transparent fabrics alone.
By loosening the large screw and sliding the plastic ring from side to side, the size of the circle can be adjusted. You can also move the position of the needle to give larger and smaller circles.
Then you just stitch and the fabric will rotate automatically, with the last stitch meeting the first one extremely accurately.
.
First try straight stitching, then zigzag, then all your patterns. Some will need a second or third layer of stitching to give more emphasis, and some longer patterns will need three or four rounds to make anything interesting.
.
Below: Straight stitch, satin stitch and some patterns. 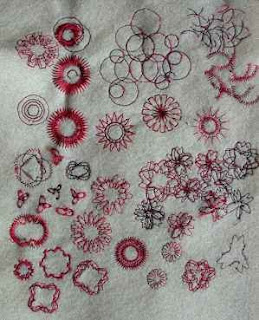 Try stitching smaller circles inside larger ones. These are stitched with patterns using metal thread on felt.

Of course, you must try the following:
Changing the tension
Using two threads in your needle
Different threads
.
Try different fabrics, some of which may have been previously painted, printed or stitched – below you can see the effect on builder’s scrim. 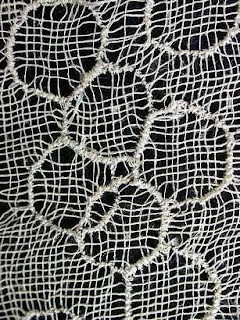 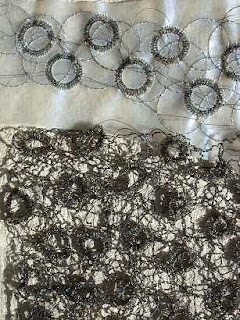 There will be more of the article in the next blog. Watch this space.
Posted by Maggie Grey at 20:46 8 comments:

At last I feel that I am getting through my to-do list. It was a very long list and remained static for some time. I once used my 'do' list in a textile for a Batsford book - when I needed a quick source of text. These days it would be a long piece of work. Perhaps that is a good idea for further exploration - the illustrated to-do list. Mine would currently look like this:
. 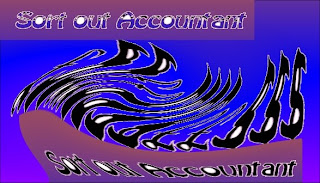 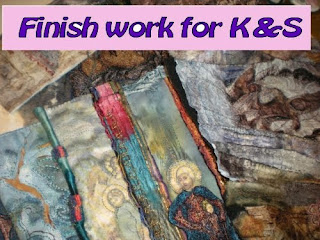 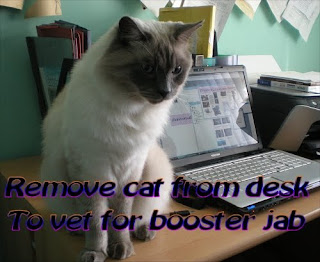 .
Well, that's the first four items. I also have to finalise the printing of postcards for the show, email all group members to finalise arrangements and chase up the estate agent. It'll be a long day.
.
One thing, the accountant shouldn't take long. We used to dread the year-end - we are pretty good record keepers but there were always odds and ends to sort out. But now we have the amazing Linda to keep our books, so there are very few queries. Almost a pleasure - apart from the paying tax bit.
.
I have just had the last address for the flower stitcher so they will be going out - another thing on the list! Anyone who is a long-time subscriber to Workshop on the Web (http://www.workshopontheweb.com/) will find an article by Val Campbell-Harding in the March 2002 issue - go to back issues and enter the password etc.
In fact I will give away the article as a series of tutorials on the blog over the next few weeks - a freebie - how about that?
. 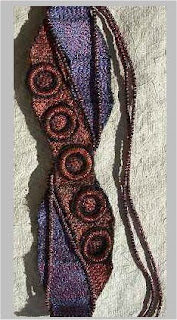 .
Here is a detail of Val's belt to whet your appetite. Keep looking in for more ideas for using these useful gadgets.
Posted by Maggie Grey at 07:42 5 comments: