Our Friends in the North

Too much going on, no time for anything but the next book, so I've grabbed an early morning spot for a bit of a blog catch-up. Comment on comments at the end of the blog.

The cutting book, 'Cut, Shape, Stitch', is so nearly there and is looking great. I have started a new project based on some wonderful carved heads that were discovered on our recent trip to Scotland and hope to continue using my cutter for that.

We had a lovely time, in spite of our car not being fixed after our prang many weeks ago. I think that they hand-crafted our headlight in Korea. However the garage loaned us a courtesy car and, to our amazement, said we could take it to Scotland. That was a challenge – packing enough work and materials for a couple of events, plus enough clothes to keep us going for over a week, all having to fit in a VW Polo.

We stopped at Newark for our first night. I always enjoy this town although that is tinged with sadness now, as it was the home of Sarah Lawrence, who sadly died a while ago. She produced some lovely work.

I have been so busy that summer clothes shopping just hadn't happened so I was overjoyed to find that Marks was still open. I think I look pretty happy - king of the castle, in fact.

We also had a lovely meal down by the river. Good grub, a sunny evening and time to talk to each other for the first time in ages - although you may note that Clive has the paper handy as a stand by. 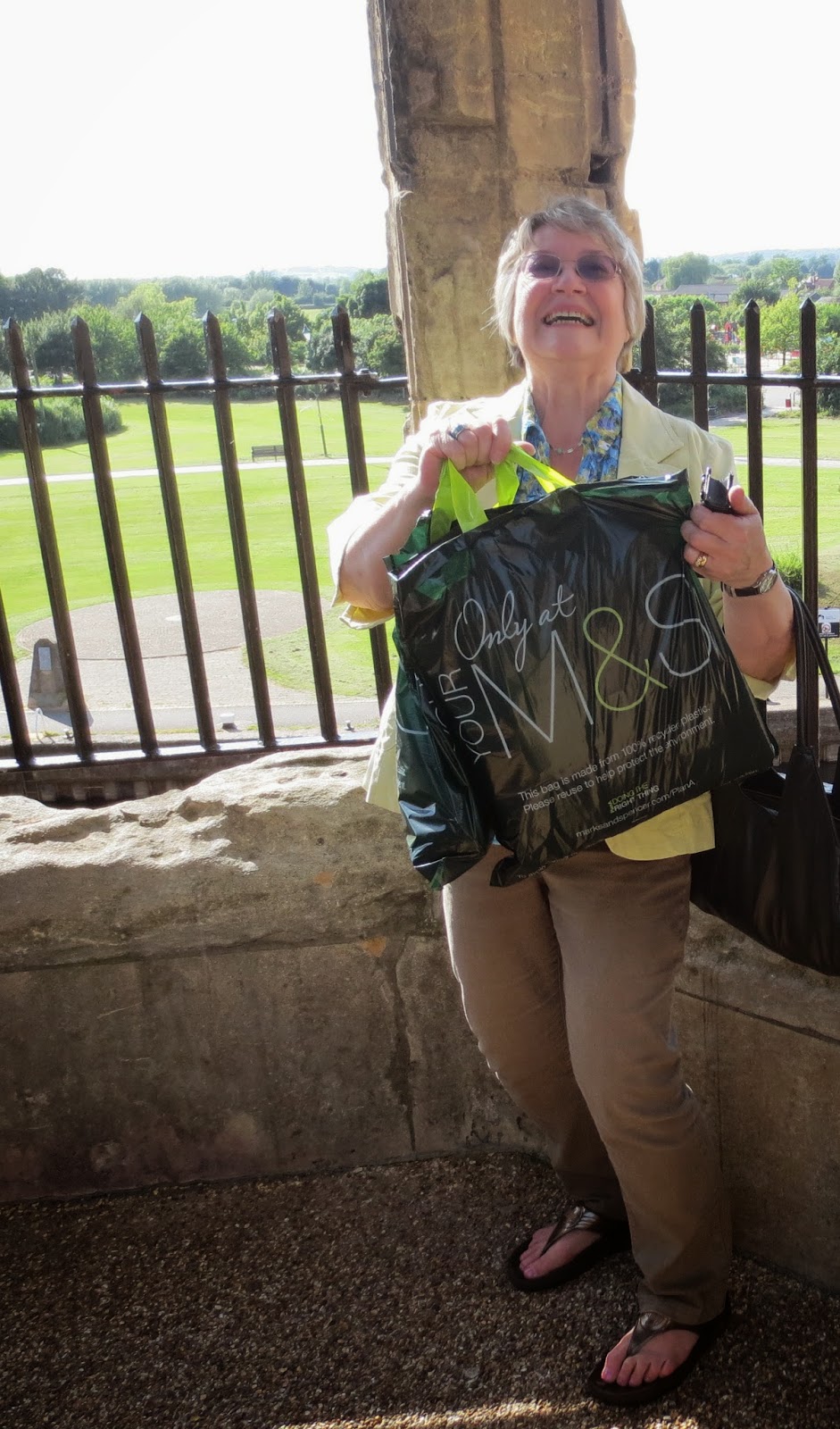 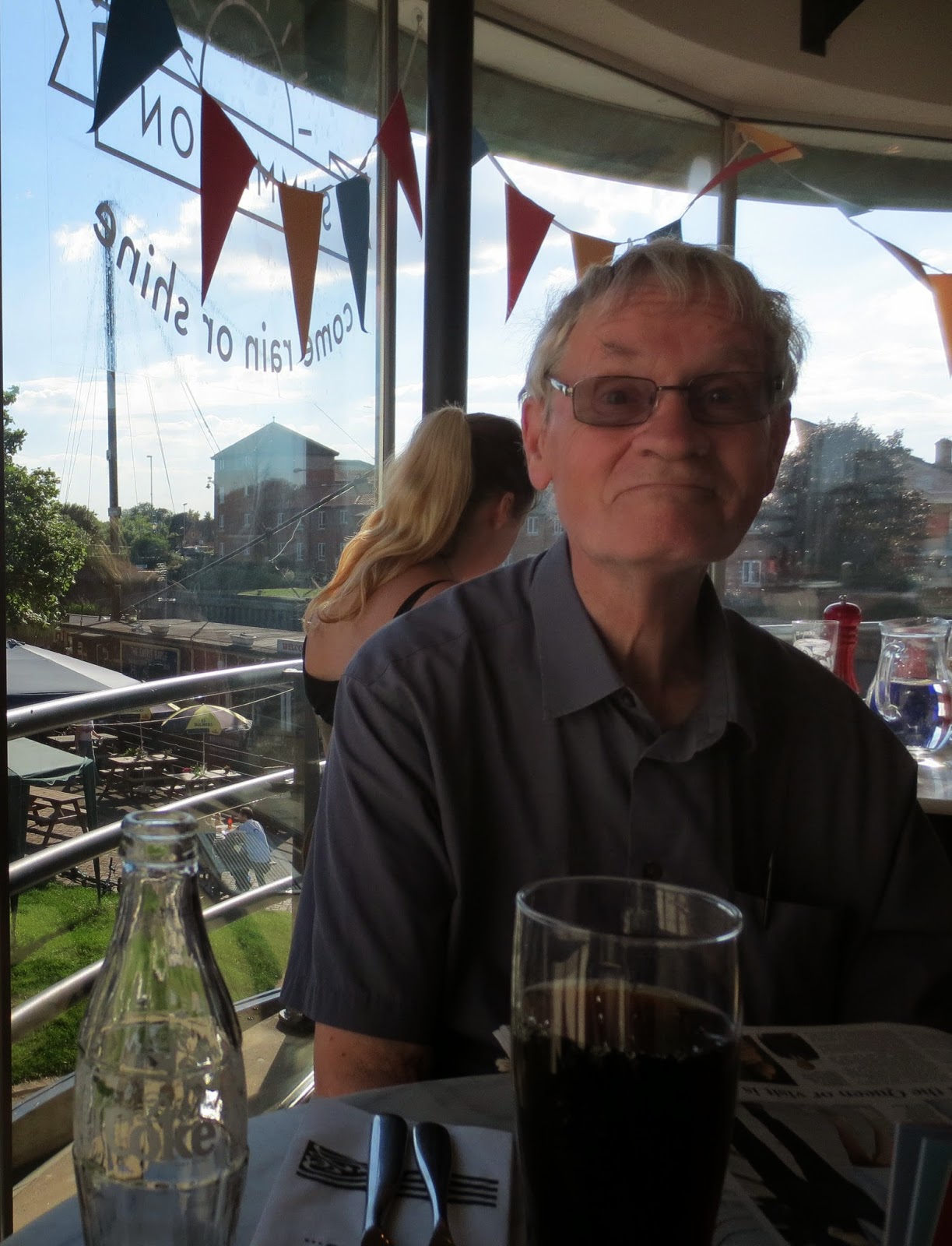 We managed to squeeze in a trip to Cragside, in Northumberland, on the next stage of the journey. This is one of my favorite National Trust houses. It was one of the very first to use hydro-electric power - or so they say. The grounds are wonderful and my knee (which is waiting for an op) allowed us to have a bit of a walk before seizing up. 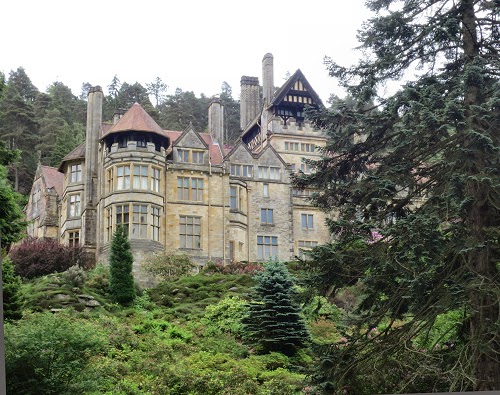 The house has some nice touches - loved this lampshade and can see a garland being cut on the Scan N Cut soon. 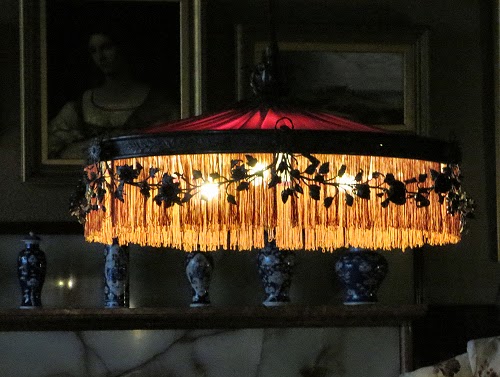 Then it was on to Edinburgh Guild on the Saturday, to help them celebrate their sixtieth anniversary.  We had such a good time with them. Hope that they enjoyed it as much as we did. I gave a talk in the morning and then we had a fabulous buffet lunch - there was a short period of panic when it was discovered that the M&S lorry had broken down en-route to the local shop, but all was delivered in time. Then we did demos and a mini workshop in the afternoon. A really lovely day with really lovely people.

On to Stirling where we had a couple of days before the next gig. We are not great castle visitors but someone told us how much there was to see and we certainly took a whole day going around it. 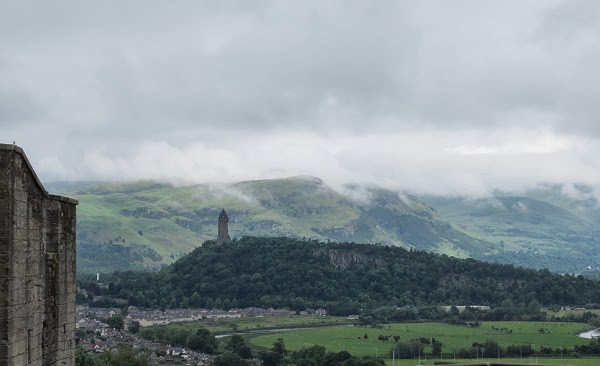 I loved the carvings of ancient heads, known as the Stirling Heads. Took lots of photos and I can feel a theme developing. Below, you can see a reprint from a painting of the time, alongside one of the heads - apparently a courtier. The head is described as wearing costume for a masquerade - obviously it was 'boobs out, girls'. I am working on a sketchbook for the WoW Sketch-a-thon - watch this space. 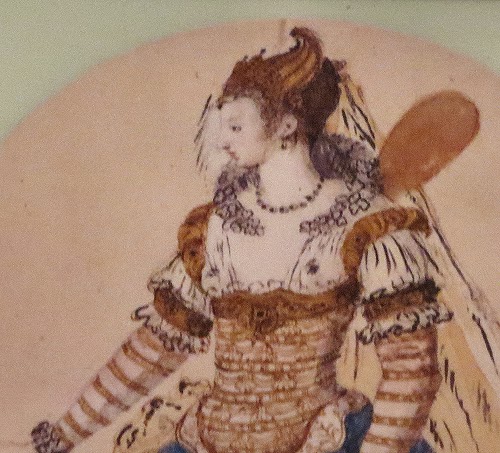 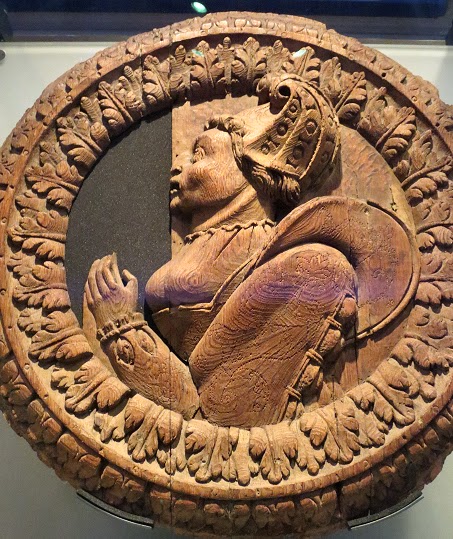 I kept in touch while we were away by showing photos on Facebook of what we were doing - represented by....'The Feet'.  This shows the feet having a rest after their exhausting day at the castle. They were very happy feet that evening. In fact, they look as though they may have had wine with their dinner. 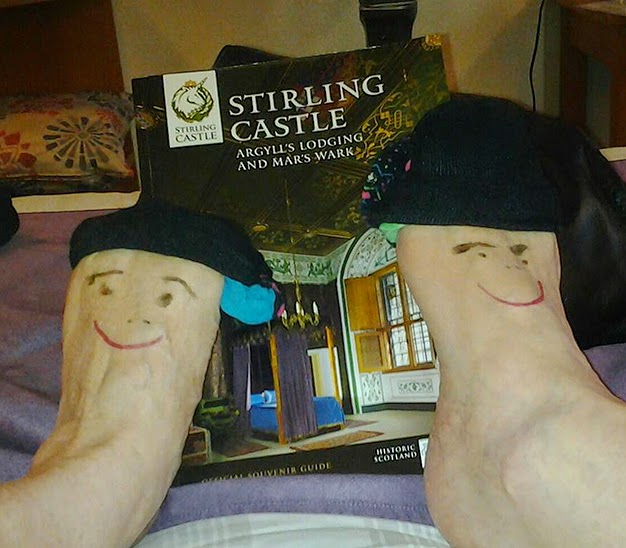 I didn't get around to posting the last feet photo. It showed a pensive foot, enjoying the plant life and feeling a little mellow after the lovely break. What the foot didn't notice was the stinging nettle it encountered while standing up again. good thing it wasn't a video. 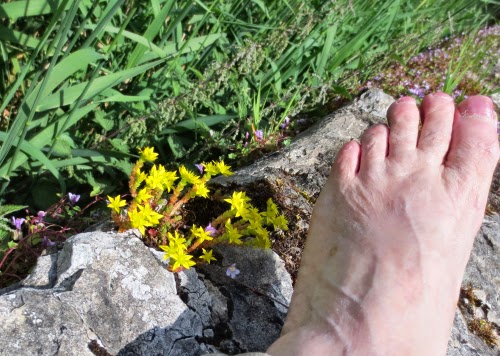 Other highlights included a lovely drive along Loch Lomond and an unlovely cross country drive down an extremely narrow track when the road ahead was unexpectedly closed and we got lost.
Then a lovely time with the Quilter's Gathering in Glasgow. Such wonderful people live in Scotland. 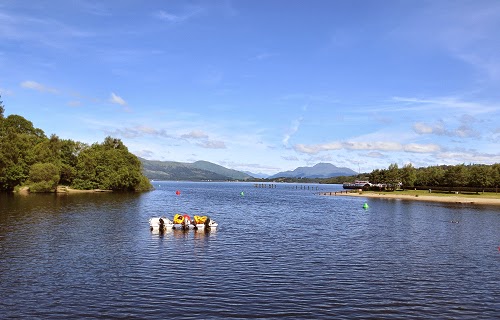 Finally we popped in to another NT house on the last day (for lunch, of course) and found they were featuring a Woolly Wood exhibit. All kinds of knitted and felted wildlife, hiding in the trees, much of which was made by children - really good to see that. 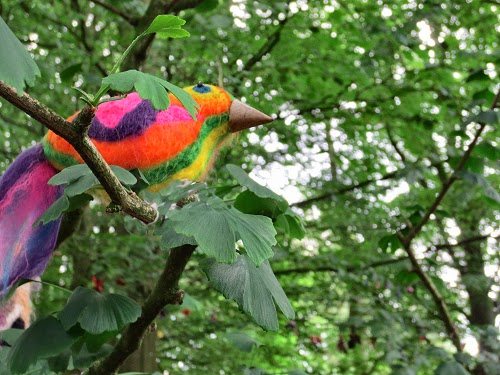 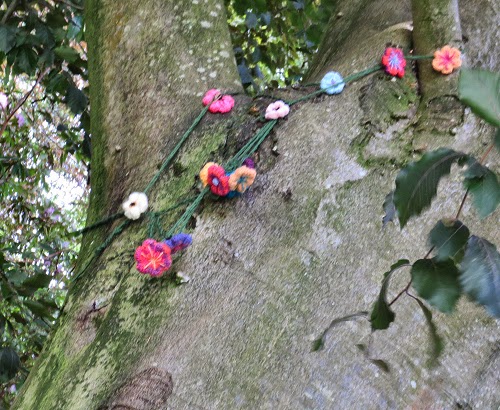 Our last night was spent near the motorway at Stafford and we had planned some more sightseeing for that day. In the end though, the call of home was strong so we got up at 5am in order to avoid the Birmingham traffic. Home by 9.30. Deep Joy.

I loved your comments - especially the ones on the cutters. I am still so in love with the whole process of cutting and hope to have lots of demos on our stand at the Festival of Quilts (NEC in August). I am also doing a couple of talks at the show. A word of warning - if you usually book your talks when you get there - and I know that lots of you do - be aware that the lecture spaces are much smaller than usual and are filling up fast, so you might want to book your seats. Always good for a sit down!  http://www.thefestivalofquilts.co.uk/Content/Lectures/5_50/

One of our talks is going to be a series of short movies, showing techniques, followed by images showing what to make with that technique. A bold and scary move that we may regret!

A few comments I didn't get to answer:
Carol, the Scan N Cut would be good with vector files from Illustrator but it works just as well with a hand-drawn scribble.
That filigree pattern sounds interesting, Jane. Can't wait to get on with more cutting.

Tricia, the book is called Cut, Shape Stitch (by me and Samantha Packer and Paula Watkins) and it should be out around the end of July. If you'd like us to let you know when it is here you can go to the d4daisy site and put your name on the list. No obligation and you might win a prize for being on the list. www.d4daisy.com

This is the beginning of a fishy vessel using the Scan N Cut built-in shapes. the final one is in the book. 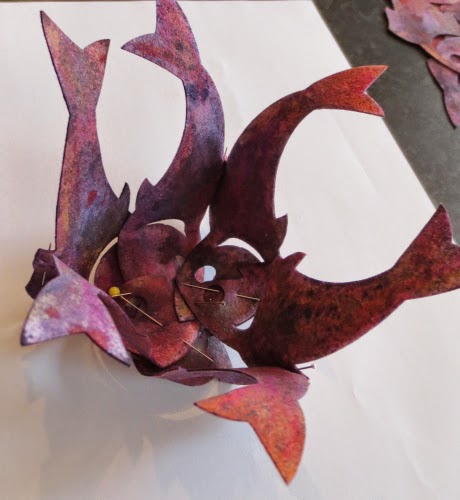 As soon as I get into play mode again, I will try to cut hand-made felt. It certainly works with very thick commercial felt.

I will try to be a better blogger. I managed to get so behind with everything that I had to have a week of 5 am starts to get the book written.