I'm Getting a Pony and Trap

Hello again – at last. If you are puzzled about the title of this blog, read on. Life has been a little tricky lately as I have been rather frantically catching up with the wordy bit of the forthcoming book on cutting techniques. There has been a lot of early morning keyboard bashing – one morning, I wrote two thousand words before breakfast.

One reason for the rush and panic is that we have decided to take a stand at the Festival of Quilts in August and it is always good to have a new book on offer. The book, Cut, Shape, Stitch is co-written with Sam Packer, features editor of Workshop on the Web, and Paula Watkins – many of you will know her for her wonderful mixed media work (and her stitching is pretty nifty, too). The book is based on all kinds of cutting machines, from simple punches through basic die cutters (these can be purchased quite cheaply second hand, I’ve discovered) to computer and scanner-linked machines. I have to say that I love using the cutters and for a long time had only two dies. I really got very hooked on the shapes that remain after cutting and there is an entire book section on that. The pic below shows Sam using a die called Artful Dwellings by Sizzix. The little houses she has made are great – all finished now – the pic below was a stage in their production. 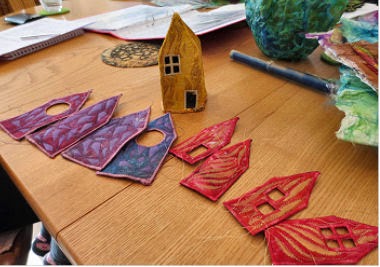 I have almost caught up now and yesterday we went to Michael Wicks's for the photoshoot. It was a gloriously mad day – all three of us rushing around with armfuls of work, painting, cutting and stitching for the step-by-step photos and generally getting excited. I was hobbling rather than rushing as my poorly knee was protesting.  I am officially on the waiting list for a new one but don’t think it will happen any time soon.

We put the Brother Scan’n'Cut machine through its paces for Michael – he was very impressed. I must admit that I haven’t tried any of the computer linked cutters (I’d welcome feedback from anyone who has one) but I am impressed with the way the Brother machine translates a scan into a cut shape. I wish my scanner that links to my PC was half as accurate.

I have to say that I haven’t been this excited for ages and think this will really have a big influence on my work for years to come. I keep thinking about how much my late and still much missed friend, Val Campbell-Harding, would have loved it. My preferred material is Craft Vilene, which cuts very cleanly and Paula has introduced me to Derwent Coloursoft  pencils, which she has used to beautiful effect on the Vilene. I have also been amazed at how well the machine cuts metal. Apparently it will cut wood veneers, too – the wood-working son-in-law pricked up his ears when he heard that. DD: yes, the Vilene is an interfacing.  It is thick, doesn't fray and is good to stitch into. I get through rolls of it,

These fish that I showed you last time are having a little shower of colour – then I shall 'do a Paula' and use the Coloursoft pencils. Excited about that. 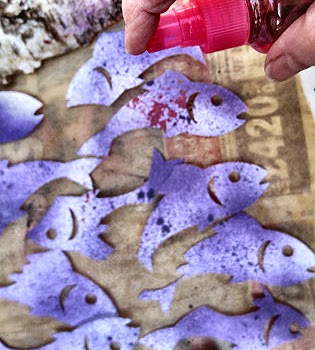 We did take time out to take a stand at the Brockenhurst Needlework Fiesta. I was demo-ing the simple hand punch machines so had lots of material to use for the book, as well. Granddaughter Sophie took to this demo-ing lark as though she had been doing it for years – stitching on water-soluble film, which can be tricky. Sadly, one of water-soluble bracelets in the foreground of this pic disappeared soon after. One of my favourites, too. My fault – I had it pinned down but unpinned it to show something and didn’t get around to putting it back. 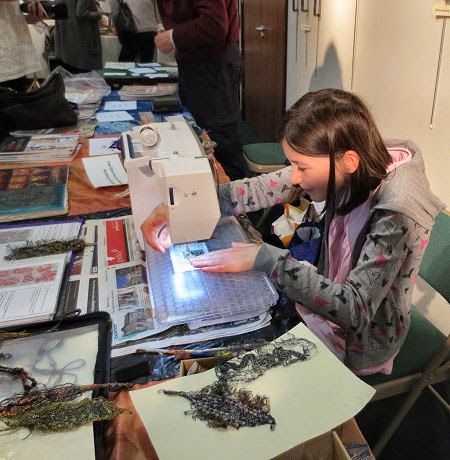 It is so lovely to have stitchy granddaughters. My other girly, Lauren, knitted me this ballet dancing cat. Don’t you love the tail. I’m not sure that I can knit as well as she does. 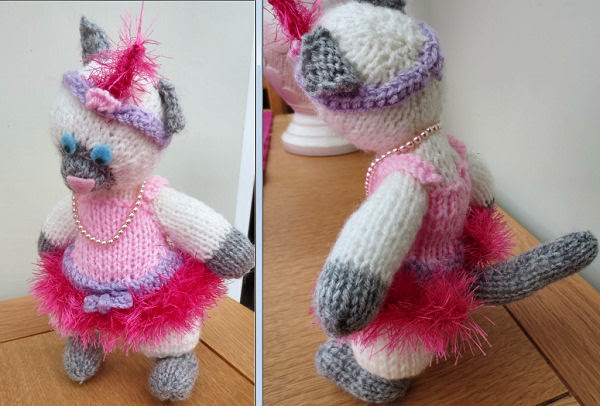 Another reason that we were a little behind with the book was the fact that we had an accident in the car recently. We weren’t hurt at all but the poor car was not so lucky and nor were all the people who were waiting to hear a talk at the Woking Evening Branch of the Guild. We were less than a mile away from the venue but you can hardly ask the guy loading you onto the tow truck to hang on for an hour or so. The ladies were so nice about it and I know it put them on the spot – we have rebooked for another time.

It has taken hours of time to get it all sorted out and we are still waiting for the car. The repair shop ordered the parts two weeks ago and they are still waiting for a battery lead to arrive. They have all been great though and we have had a hire car and, now, a courtesy car from the garage. The time spent on paperwork and the hours on the phone have all added up and we did feel very woozy for a day or two.

I am really off travel in any form. Yesterday, coming home from the photo thing, we were about to take an exit onto the M25 when the matrix sign flashed up, ‘M25 long delays. Junction 4 to 31'!!! That’s most of the M25, isn’t it? We came home a roundabout way and it took us an extra two hours! I think I shall stay home and play with the Scan'n'Cut instead.