Hissy Fits, Cats and a Secret

What an amazing response to my grumbling. It made me feel so much better to know you are all on my side. In Batsford's defence, they were cross too, as the article hardly mentioned the book. They had given permission for an excerpt and sent some images but I can't blame them for not expecting what the magazine did. As those of you who are editors know, there is a code of ethics and this magazine seems to breach it all down the line. I can't imagine not paying for articles - with WoW and Quiltwow, I take the view that if you want good people you have to pay for them.
Love Diana's idea of a letter. Might try that but I doubt they'd publish it.
Don't think it's a copyright issue as Batsford gave permission, Hippopip.
The piece has been dispatched Julie. Hope it arrives safely. Thanks for the condolences - it was very sad. More on this later.

Hadn't looked at the Flair site, Writer in Res, but you are right and this is borne out by their treatment of Annette, Viv and Rosalind.
Lorraine is right and having d4daisy as publishers makes it easier to control things like this.
Heather - I'm so glad you are enjoying the free lessons. I'm loving the Yahoo group, now I've got the hang of finding everything!
Sewlknit2 has it in a nutshell - unfair to readers of the mag and the book. It really wasn't the lack of payment that I minded - book publicity is often a quid pro quo arrangement.
Good to hear from you, Annabel, a concise comment. Poo just about sums it up.

Diana - thanks so much for nominating my book 'Raising the Surface' for the CPS 'Book bits'. I've just had my royalty statement from Batsford and this book just goes on selling - amazing.
Thank you all again - I feel I can stop moaning now - seems to me that the mag won't be around long with an attidude like that.
I've had an excellent week. Finished Digital Humanity for the Cyber Fyber Exhibit. Here's a little detail. Just got the finishing touches to Digital Reliquary and they will go off to America - via Michael for some photos in case they vanish on the way. 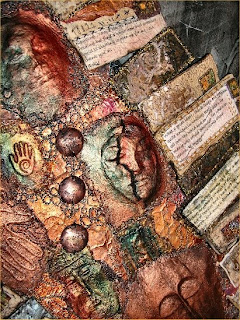 My new table and chairs came which meant a total rearrangement of two rooms. They look great but why is it that when you swap rooms around you are always left with:
Two vases and a large plant that don't fit anywhere.
A piece of furniture that is two inches too long for the place you planned for it.
A bad back.
I had a lovely day out with Jane Wild. It was Olga Legg's funeral that we went to and she was a very close friend of Jane. Olga had battled against cancer for many years and she was a real 'one-off' as a character. I will try to get an image of her C&G final piece - called The Luggage - and you'll see what I mean. Jane and I were in that rather fragile emotional state where you either laugh or cry and we settled for the former. I haven't laughed so much for ages and it was a lovely day.
A brief history of cats. I've had lots of enquiries about Stevens'health and I've been scared of speaking too soon but the steroids seem to be doing the trick. They've reduced the dose now so it's still fingers crossed. 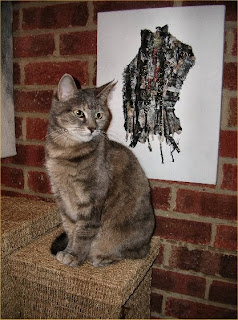 Smudge is still a bully. Here he is in Killmouski mode. Luckily it's just a toy. 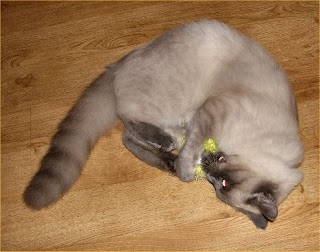 He hides his toys in the wine basket so everyone thinks we have an alcoholic cat. his markings are really developing now and he such a lovely soft coat. He makes a great hot water bottle on these cold evenings. 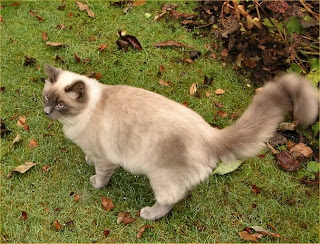 Must go now as I have a secret assignation with Purplemissus and Carol M on the M4 motorway. More on that later.
Posted by Maggie Grey at 09:16

I have to admit I'm not a cat person, I feel too many irresponsible owners let them run around killing native wildlife. However, Smudge is the most beautiful cat I have ever seen, he looks like he has been blow-waved!!
Love your piece for cyberfyber, great colours and texture.

Love the Cyber fyber piece its delicous. have just started on my altered book, thanks for the classes Maggie, The cats look adorable, glad Stevens is gettting better.

So sad that another special person has passed on, but at least her suffering is at an end. Your Cyber Fyber piece is gorgeous, as is Stephens who is looking very well for a poorly cat. Smudge is getting more handsome each time we see him.

A secret Assignation eh---is that like "the 3 Musketeers or maybe the 3 Stooges mett on the M4 Motorway".
I love the Cyber Fyber piece.

My attempt a humour caused me to write mett instead of meet.
That will show me won't it.

I shall lie in wait for the postman! Can't wait - I feel very privileged.

I had to laugh at your alcoholic cat! And I'm glad Stephens is improving.

I confess I haven't managed to get started on the projects. Health issues holding me up atm.

I hope you, Purplemissus and Carol didn't get lost in the fog today.

Well Maggie , you're not alone in the re-arranging department OR the sore back. ;( But your Humanity piece should make up for it *G* , wish I could see alllllll the gory.
Sure glad to hear that Stevens is responding to his meds too - he's looking Very handsome. And awake. More than I can say for mine lol.

That was meant to be 'glory'.

going back to where I came from now.sigh.

Love reading your blogs. I've just received your 'Textile translations' in the post (a Xmas pressie to myself in the hope of keeping it unread until then!) What an idiot - one peek inside and I couldn't put it away - great stuff - must start your online classes.

Hi Maggie - have had a few days away in Derbyshire, but have read back in your posts and think I have caught up. Agree with all the previous comments about Flair magazine - what a cheek!
I really must start trying to do more 'digital' stuff with photoshop and/or PSP - you are such an inspiration! Hope the back is on the mend, Gill x

your kitties are gorgeous
I love cats
jane

Your cyberfiber piece is absolutely gorgeous. Can't wait to see the whole thing.

Aren't cats just the best entertainment? When they're not being murderous and/or destructive, I mean. I do hope Stevens continues to improve.

Wow I have just received your Textile Translations as an early Xmas pressie today - am I allowed to join your online class even though I didn't buy the book thru you? Can't wait to get a cup of coffee tonight and snuggle up on the sofa with the book anyway! Sorry husband!

Dear Maggie,
I was so sorry to read that Olga Legg has died. I had only met her a couple of times when I was stalling out at the American Museum at Bath. She used to come to buy French Linen and all sorts of interesting vintage bits and pieces. We seemed to click straight away I suppose because of the love of textiles and art and stuff. She told me about her luggage piece and I would love to see a picture of it. She had just finished her C&G after a year out when I first met her and I was in the middle of my Patchwork and Quilting C&G. We had lunch together on the Terrace - I was supposed to be working - but Olga was much more interesting. I was always looking forward to our next meetings but she had been absent for quite a while. I am so pleased I took the trouble to read your blog yesterday. I have had a frantic time with work in the last week and was doing some catching up.
Incidentally I love your new book. It has become my new bible!
Liz

Yes, Smudge is a cutie, but please tell Stevens for me that I think she is a beautiful cat. And since I'm definitely not a cat person, that's something! The Cyber Fyber pieces look intriguing. I hope I get to see them in person, though with the economy the way it is, it doesn't look likely.