CDROM and a Trip to London

Aussie Jo - the cast paper was, for once, proper paper-makers stuff. You buy cotton linters and soak them before liquidising. I can't usually be bothered but Jane kindly brought in some ready mixed pulp for our group to play with. It is not so precise as the water-soluble paper but is better for the heavy stuff.

Wendy - we used to play that game of 'I don't want my egg'. Must be learned behaviour from our own childhood. I hope our grandkids will do it with their kids, too. Such is immortality!
Glad to help, Judy. I do like the Golden paints. Their ordinary acrylics are good but the Fluid and the Interference ones are magic.
Heather - love the Grenadier Guards, great idea. Didn't see the bit about the soft-toy-bringing cat but a new sponge appeared the other day. Smudge has been to boot camp - a sleep-over with my daughter as we were away. He gets put in his place by his mum and dad and has slept all day today.
Teresa - I bet you are having such a great time with Dale. i have enjoyed doing the freebie on-line course - they have produced some wonderful work. I am about to post the next lesson - a challenge. I'll be sure to show you the results.
Talking of Dale I have just ordered some Starburst Stains from her. They arrived from Oz in under a week and were cheaper than I can get them over here. Because they ship as dry powder they are cheap to send.
She slipped this little hand charm (I'm sure she has them in stock) in my package - she knows I collect them for my altered book - the handbook.
- 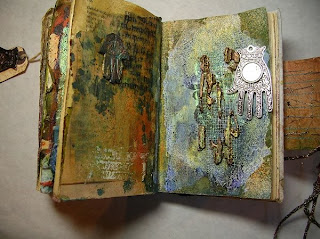 -
I will have to paint it with alcohol inks to get it the same colour as this one. It looks too new otherwise. 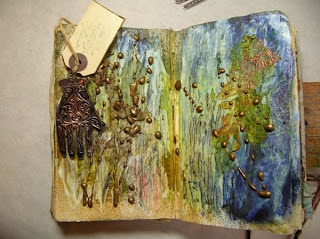 -
This reminds me of some of the work Jane Wild did for our Paper & Beyond CD, now re-available. You can see some of the exciting things it contains by clicking HERE There's an order form there, too. 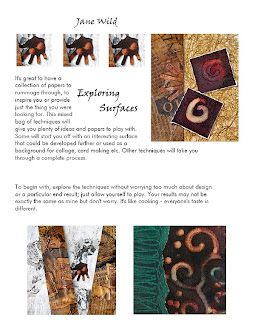 -
We have had so many people asking for it that we have had a few more burned. It contains some great ideas for surface decoration - here's Jane again with ink and bleach ideas. 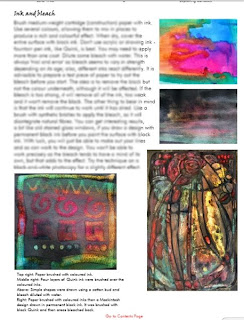 -
Me with a polymer clay workshop.
- 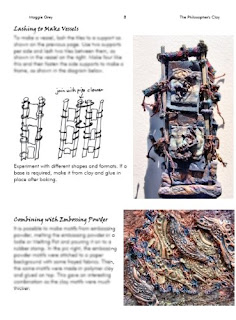 -
Be careful if you have already got this CDROM as the cover is very slightly different - you don't need to buy it twice. It has benefited from one of Michael's photos - he's so good at these close-ups.
- 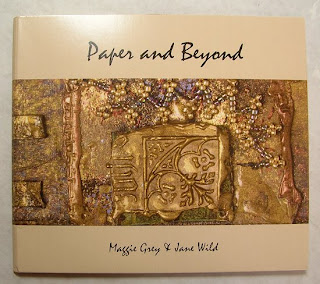 The CD looks the same - one of Jane's inky bleachies with an Art Nouveau theme.
- 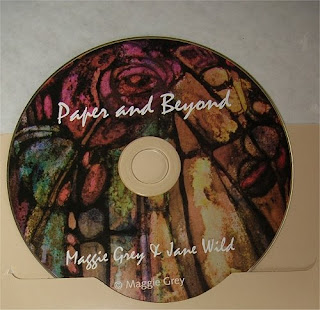 -
Advert over - back to the blog:
We went to London yesterday and met up with Chris (over from America) and Ruby and Ian Lever. Ruby and I had both taught the group that Chris helps to run in the USA. We met at the British Museum and had a bit of a drool over the Sutton Hoo treasure. Then we went to the Babylon exhibition which we all thought was a little disappointing. The artefacts were awe inspiring but there weren't too many of them and there was a lot of padding. Maybe we have culture fatigue and just expect too much. Has anyone else seen it?

This tiled wall was terrific.
- 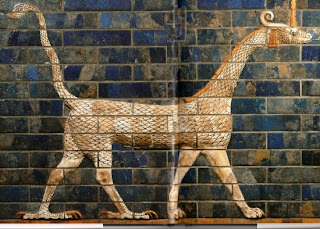 On the way home, there was an awful accident on the motorway. The traffic was squeezing by, but the ambulances were still hurtling up the other carriageway. There was only one rescue car there with a bemused looking chap. You feel so humble and wish you could help. It does put the economic situation into perspective. We drove the rest of the way home very carefully.

I have got on really well with WoW and Quiltwow and am resolved to blog more often. Have fallen by the wayside lately.
Posted by Maggie Grey at 15:54

Your altered book pages are beautiful. (Note to self: must try harder). I love that tiled wall in the museum exhibit - very inspiring. Thankyou for reminding us about Paper and Beyond - I have it tucked in the bookcase alongside me and keep forgetting to refer to it again.

I rather liked the Babylon exhibition for its combination of artifacts and various artistic interpretations of the myths surrounding the place - I didn't reagrd it as padding. I agree the glazed ceramic panels from the Ishtar gate were very impressive. particularly the 'Mushhushshu' dragon.It was interesting to see how powerful an idea the Tower of Babel has been in artwork from Brueghel onwards - there were several contemporary pieces. I particularly liked the collage work of Anne Desmet, painstakingly built up from multiple prints

Hello Maggie, I must tell you that I received your book Raising the Surface for Christmas and have been so much enjoying working through it and trying many techniques you describe so well. It has been a lot of fun and certainly adding to my knowledge and skills. Thanks for writing your books and sharing your ideas.
your fan Jan

"Keep up" I should jolly well think so, I mean what else have you to do except produce classes,give talks, organise two leading on-line magazines,produce stunning fibre pieces, write the odd book or two, answer all your comments, keep Smudge in line...for goodness sake woman!!!

"Boot camp" will have me giggling all day.

Thanks for the tip on th Golden Paints i have noted it in my journal. The tiled wall is a beauty, you are so lucky to have access to the British Museum, at the moment we are seeing a TV series about their collections (here at the bottom end of the world) and as a non traveller I am soaking it up for future reference.

Funny little Smudge! You won't need to buy sponges just send Smudge out for one.

I've been reading your blog for a while now and felt I should stop lurking and thank you for your lovely books and your generous sharing.
I have had "Paper and Beyond" on order since November and it arrived the day before you posted this message. I resolve to take it slowly and savour every moment!
Frances

Thank you for the cotton linters tip. I have been doing some searching on the web and there seems to be all sorts of recipes using combinations of cotton linters, paper or clay slips. Have you tried this with clay?? I'm after a reasonably smooth surface for the face of my 'sea angels' for an exhibition. I've got the Paper, Metal, Stitch out and found lots of examples there. Does anyone know a good supplier of cotton linters??
Dale perhaps???

Stunning things as usual Maggie ... I haven't had a chance to stop by for a while and what a smorgasbord of yummy things to look at - fantastic! I will miss you when you are here in Perth :-( I will be in UK! lousy timing on my part but I am over there for my Mum's 70th B'day.... I know you will have a ball with Dale though and look forward to hearin gabout it on both of your blogs.
Britt West Australia