The Festival of Quilts

It’s a mad house here, getting ready to go to the Festival of Quilts. We are not having a stand this year - it was so close to our return from OZ and we thought we wouldn’t be up to it. However, I am doing two talks at the show: on Thursday it is Design to Stitch (mixed media) and on Friday a new version of our Old Walls and Painted Halls talk. Do come along if you want a sit down - at £6 it’s a very reasonable price for a comfy seat.

I’ve got the rock art photos and drawings in the Old Walls talk. I have printed out some pages on Ink-Aided paper and am stitching into them. Made a couple of stencils and sponged clear embossing fluid through them, then sprinkled with clear powder and puffed.
. 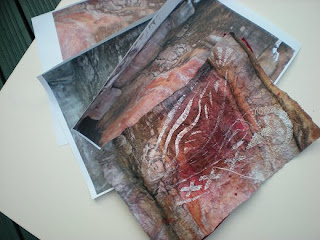 This acted as a resist when I printed them. Simple hand stitching will be followed by some machine work. 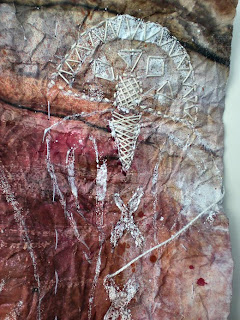 I think we were right not to do more at the show and I’m so glad that I put a lot of work into the two new talks before we went. It seems to have taken us longer than usual to get back to normal after this trip.

Our laptop was taken ill in Oz after being dropped by a taxi person. The fan broke and a very clever couple of chaps in Sydney fixed up an external one which kept going really well. This week however it finally died so we had a quick trip to the putey shop and got a dear little Dell-boy. He’s all up and running with all our talks on him, so fingers crossed.

I have been very remiss lately in answering comments so here is a catch up. Thanks for the comments on the hat. It was only an M&S one but I tarted it up a bit.

Ann: I sent for my paper from Power Planet – found them on Amazon Marketplace and they were very quick. I ordered loads so I hope it keeps well.

Doreen – are you better? Hope so.

Wabbit is so right about one’s own bed but it’s difficult to get it on a plane. Btw, Margaret – we didn’t set the timer for the bed pic, but got a granddaughter to take the pic. She thought it was a hoot.

I’m in Peebles – Scottish borders - soon Tattiekite, but that may be a little too far north for you.

I must also explain to Dale that a small holding in the UK is rather large – not quite a farm but usually a pretty good acreage – like your stand at Perth. I am kicking myself for not buying more while I was there – in particular those Starburst Stain sprays – I have put all my dauby Stains into spray bottles but I now need more colours!
Posted by Maggie Grey at 10:17

Those '0ld Wall' pieces are wonderful Maggie. You have a magic touch with paper and stitch. I am about to do the same as you with my Starburst Stain daubers. I thought I would prefer a different way of applying the colours but like the sprays very much. Have a great time at the Quilt Show and hope you didn't lose work when your laptop died.

I'm on the mend Maggie about 75% so by the weekend I should be ok here's hoping anyway.
I need to finish my stuff from your workshop because I want to put it in the Guild annual exhibition.

The rock painting piece is magical Maggie.
Shame about the laptop, maybe taxi drivers should have luggage handling training!
I was helping my brother and sister in law move into a new house after an OS transfer a couple of years ago and was outside when the removalists dropped a box off the back of the truck, it was their sound system! Luckily covered under insurance.

never mind Maggie - I will be bringing them with me to Ally Pally.... and yes I know about a small holding - although we did fell our stand looked like a ranch. Mareene is very generous to us

I was so disappointed as I read the FOQ list of stands and couldn't find you anywhere. So I shall certainly try and book a place for a sit down the minute I arrive :) See you tomorrow!

I'm so envious of those going to the FOQ. I hope you all have a wonderful time and spend all your money!

What a pity about your laptop. I know I'd feel as if *I* had been dropped! It's sad that they don't last forever. Setting a new one up just the way you like it is a bothersome process.

I've been in that bizarre position between the ex and the current (and last!). Maybe they felt it was more bizarre than I did. But good on you for still being friendly enough to sit together. I don't get these people who hate their ex forever. If you liked each other enough to stay together for a while, you can surely be polite for a finite period of time! Or you and I can. We've proved it!

I was so disappointed not to be able to come and listen to you Maggie. I went to book on arrival only to be told it was almost finished and I never saw a trace of you at the show
:( It will have to be Ally Pally.