I'm having a new hall carpet and I'm on cloud 9. No, I really am, as you can see from the pic below. That's what the underlay is called. It bodes well for peace and harmony. 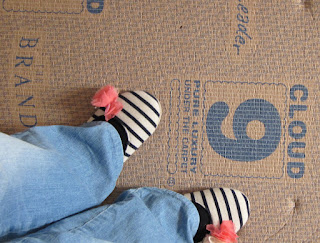 Can't remember if I told you about our disastrous flood in the kitchen which resulted in new tiles in there as well. Actually, they look much better than the previous floor. 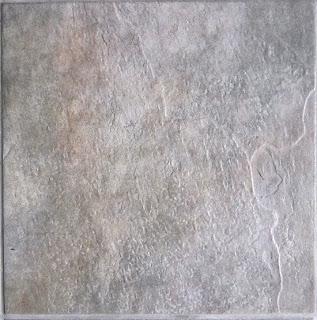 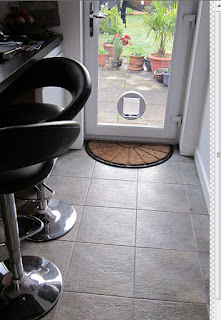 Seems to have taken over our lives as we thought it wasn't worth a new hall carpet if we were going to paint the walls later. So that turned into a full scale paint everything job. I am blaming all this for the fact that  I'm running late with the last free on-line class, linked to my Dissolvable Delights book (on the d4daisy site). I now have the requirements on the daisy chains blog and the class will be there next week, I hope. It's based on the wonderful contrast between metal shim and water soluble lacy stitching.


I have been interviewed by the Colour Queens for their on-line journal and used the piece below to illustrate one of my points. Do you remember her? I made her for an exhibition just before we moved into this house. One of you blogging mates left a comment calling her the Angel of Relocation and after that I really couldn't sell her, so had to make my buyer another one. Not the same though, as I can't bear making the same thing twice and that is why I rarely work to commission, unless I'm allowed a free hand. If it was you who christened her, do let me know as I'm so pleased that I kept her. I sold all of my Ancient Faces series so it's good to have one for me. 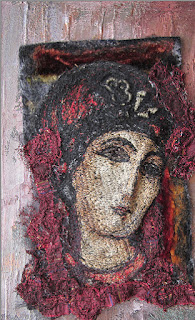 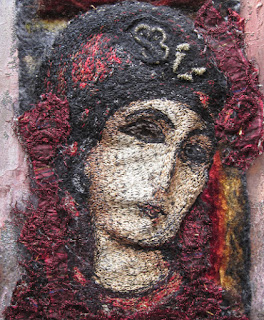 Thanks for comments about blogger v wordpress. I think I am with Robyn and Heather and will stick to the devil I know.

Smudge's poor paw has mended very slowly and today is the first time I have been able to let him out. He is helping Clive in the garden and I shan't let him stay out too long. I am more than ever convinced that it was a fox or a dog as it was a bite, but much deeper than a cat could inflict. He thanks all his friends for their concern and says that you should have seen the other guy. I think his self-esteem has suffered a knock as he has been quite subdued.

I love the shoes too!

I don't expect that Smudge will be down for long, even if he is acting subdued right now. Once his paw stops hurting, he'll probably bounce right back.

That anti robot typing has a lot to answer for.

Glad Smudge is on the mend - I would agree with a case of knocked confidence, and they can take a while to regain peak form.