The Big Day Off

It has been a very hectic time lately, what with the book, the show and the knee. I have a date for the new knee - 19th August. I have already had operations on my hand, now my knee - hope my boomps-a-daisy doesn't go next.

I am having a whole day off because it is my birthday. In a minute, we are going to Walford Mill in Wimborne. It is a great gallery and they have an interesting-sounding exhibition. Later, various kids and friends are descending and this evening we are descending on Fiona for dinner. Well; that is the plan. Clive bought me a new Kindle and a box set of Trollope (Clive does love a good trollope) to watch when I am chair-bound. He also bought me a Calla lily as they are my current fave thing. It has replaced the elderly orchid in the bathroom. 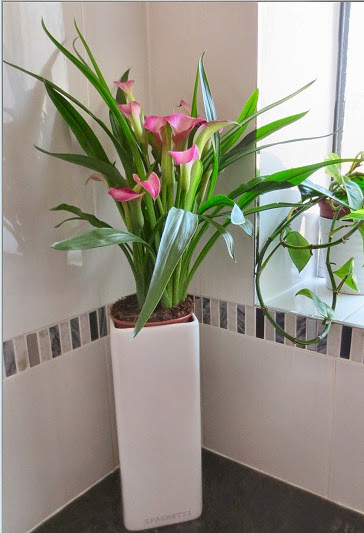 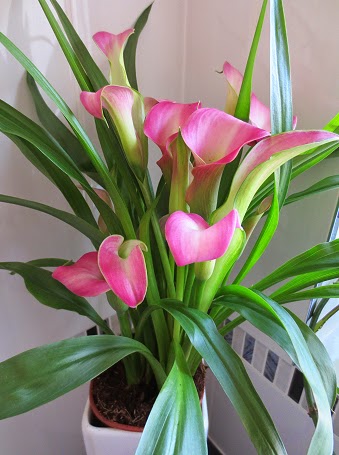 Do you remember my wood warrior race? I was playing with them on the Scan N Cut. I was puzzled as to how to mount them and in the end they ran away and hid among the leaves of my birch bark piece. 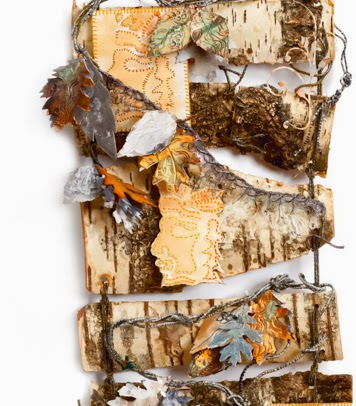 The lion masks that the warriors wore have been terrific fun to work with. They have been vessels, been mounted on stencilled backgrounds and are about to be stitched as a background to a large hanging I am working on. I am having a retrospective exhibition at the next Craft for Crafters show in Devon so I'm working on new, big stuff for that.

I have also used the lion drawing for a Brother tutorial on the Scan N Sew - will let you know when and where it appears. 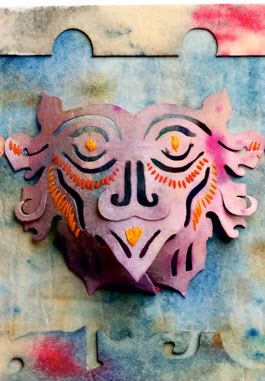 I am really hooked on this Brother machine and am now pursuing the heads theme by looking at a series of carvings that we found in Scotland. Stirling castle was a very inspirational place and we spent a lovely day there last month.

The heads, which were carved, were once brightly painted and they had fantastic head dresses. Don't know if you can see them in the pic below. I'm also fired up by the Green Man legends. I think they sprung from my wood warriors - their antecedents. 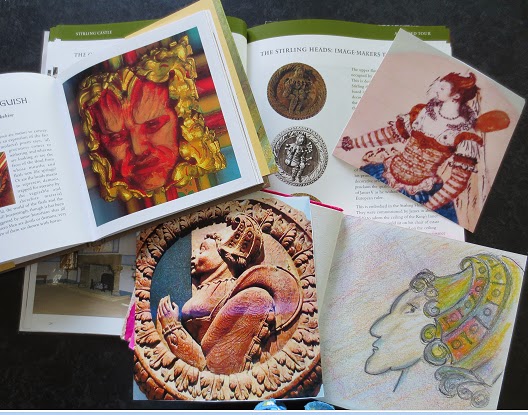 Thought I would cut them in a similar way to the lion but my first attempt looks like Rod Stewart on a bad day. Perhaps he will be better with his hat on. 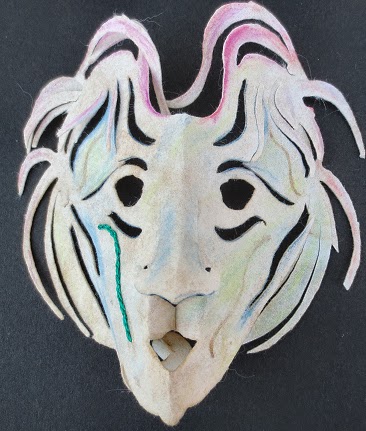 The book on cutting  is coming this week so, if you are on the 'let me know' list, we will soon be in touch. If not, you can go to www.d4daisy.com and join the list - no obligation to buy and you might win a prize. I can't wait to see it at last - it seems to have taken ages but really we did most of it in the last two months.

I am doing a talk on cutting at the Festival of Quilts. I am also giving a new talk on mixed media techniques, shown as videos as well as images. I foolishly called it 'Textiles, the Movie' but forgot they only put the title on the show booking forms so it wasn't clear what it was.  So it didn't get many pre-bookings. If you are coming to the show, you might like to come and join me - everything from metal to Tyvek will be considered. It is on at 11am on Thursday 7th.

Love the look of these Maggie. I hope I get to see them for real somewhere.

Happy Birthday Maggie - the lily is beautiful. Love your Wood Warrior and I too love the Green Man.
At least you haven't got a long way for your knee op. and will have plenty to occupy you as you recover. Have a lovely evening with your family and Fiona.

Happiests, Maggie, a blossom day to you!

Good luck with the surgery Maggie, my MIL had two knees done at once and bounced back much fitter and stronger.
I was hoping to catch up with you at the K & S as Claudia and I are off on a backpacking adventure September/October? Nearly two months after the surgery so you should be back on your feet and racing around again perhaps!!

Thank you for all your kind messages. I had a lovely day.hope we get to meet up, Aussie Jo. Great that you are coming over.