Ominnimo - thanks for the explanation. Good name.
Leanne - glad you are looking forward to QuiltWow. The good news is that we are hoping to bring it in at fifteen Brit pounds - even cheaper than WoW, which is a bargain!
Yesterday I was playing with the idea of Schism - in the context of a life changing event. This was brought on by something I read in the Sunday sups about a couple who were pootling along the motorway exit slip road, talking about getting home, when they were hit from behind and she never made it home. Very sad. The gloom was deepened by remembering my mother saying when Dad died (very young) that the ordinary, boring times are the best and I should cherish the present moment. Very soon after that I divorced my first husband, which was probably not at all the effect she was aiming for! Anyway, that is all too sad, but I was still thinking of the single, life changing event and hit on the Garden of Eden. One bite of the apple and Oops, out you go.
I made a piece in this vein before and called it 'Scrumping, the original sin'. In England scrumping is kids stealing apples - minor offence. Can't show you it as I sold it and forgot to take a photo.
The Adam and Eve figures were still in my sketchbook and I saw the Garden of Eden as rainforest. So out came the Aussie photos and a big collage was made from the printouts. Somewhere in there is Jan Beaney, sitting on a rock. Scrolls were placed at each end and I really like these. The design is overbright as it will be scanned and printed on inkjet cotton which sometimes dulls colours. The design was difficult to photograph as it is quite large.

Adam and Eve are printed on transparencies as they will be on sheer fabric in the stitched piece. Probably. The snake morphed from a drawing (left) of a climbing fig, clinging to a tree. This went through several Displacement Maps (Digital Gran's favourite). Hope you can see the serpent in the final pic. 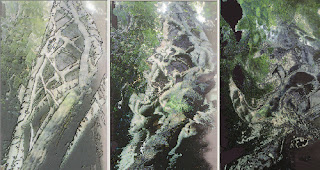 Detail of the scroll below. I added some words from Genesis, printed on painted tissue paper. Can't wait to turn it into stitch and plan on hand as well as machine stitching. 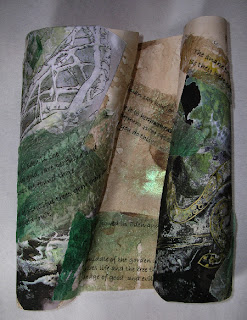 I seem unable to write short pieces - probably write too many articles. Sorry.

I'm enjoying your long posts Maggie! I love to see how people develop their ideas and designs so found this really interesting. can't wait to see the stitched piece.

I like your long posts explaining how things are done. They inspire me. Also, like the scroll. Sandy

Long posts are great - your work is phenomenal!

I look forward to seeing this work Maggie and you do remember it was you who set me on the road to displacement maps with the word Joy? it was in the CTDG mag as it was then many years ago.

The lnger the better
I love the schism, especially the aussie conection

I love seeing how your pieces develop Maggie. Thank you for sharing the process.

Forgive my ignorance, but what is a displacement map?
The long posts are the BEST--we all who worship at your feet :} want to know how you do your work!!!