This and That and a Hawken Hat

Glad you all liked the hats.

Heather thanks for the compliment.It was fun editing Embroidery but I wish I'd had full colour. It was always such a terrible decision as to who had to have B&W pics.
.
I went to a garden party at Buckingham Palace once, Clare. (One's egg sandwiches were superb). It only occurred to me afterwards that I could have borrowed a Cauli hat from Deirdre - would one have been thrown out for lese majeste?
.
I have a 640 too, Sandra, and I do love it. Not sure about the BSR - it wasn't suitable for the satin stitch I was doing and it didn't let me go very fast but I shall have another go soon.
.
Great to hear from Arti again.
.
Maybe we'll have a WoW readers' weekend. Don't tell Clive - I was impossible to live with while arranging the Embroidery one.
.
Hi Liz - good to be in touch again - the blog looks good.
.
I have been slaving over the work for the photoshoot next week. I have quite a lot still to do so, if I am misssing for a while, you'll know what I am doing. Lynda (PurpleM) and Carol Mcf will be there so we'll all take some photos for the blogs.
Have been trying to kill two birds with one stone - working on a piece for the Ramster exhibition, which I foolishly titled before I'd made it. Never do that - it never works, I find. It was called Celtic Spear and I wanted to build it up from paper strips. Here's one of the painted papers.
. 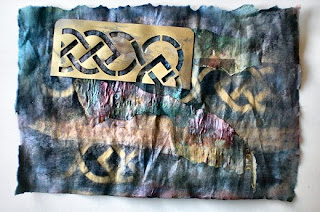 .Torn into strips - a close up of the stitching.
. 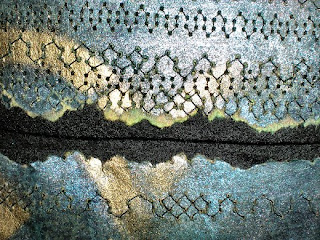 .
If you stitch blotting paper from the back it causes puffy marks on the other side. They don't show up well here but it is quite effective.
. 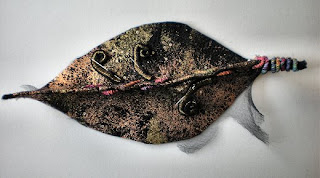 .
This is the very beginning of the spear. I hope that the next time you see it will be in the book (if it works).
.
If you are doing my on line classes I am having trouble posting to the site. Will try again later but I haven't forgotten you. Our internet connection went down this morning, which is very rare and it's still a bit iffy.
.
I have to tell you the sad tale of Marilyn, a catalogue killer whose catalogue was stolen from her front garden, possibly by a tidy minded neighbour. Some people just don't recognise treasure! She is distraught. Don't forget the 2nd April for the revelation on catalogues.
.
I have a quick Smudge story. You have heard before what a thief he is - he targets my nice neighbour and brings me their car washing sponges. The same lady looks after her toddler grandson a couple of days a week and, of course, Smudge considers that he has a vital role to play in this child's education. He goes to help her amuse Sebastian in the garden and is very good about things like pulled tails.
Yesterday Clive shouted out to me - 'Quick, look at Smudge - what's he got now!'. He (Smudge, not Clive) was running through the garden, heading for the cat-flap, wearing a red nose. Closer inspection showed it to be a small red plastic ball (one of Sebastian's). I don't know how he managed to hold it in his teeth but I wish I'd got a photo - could have sold it to the papers for red nose day.
Back in a week's time, when all the madness is over.
Posted by Maggie Grey at 16:50

I love the stitching on painted blotting paper and the Celtic Spear is wonderful - I'm a real fan of Celtic designs. Love the Smudge story, he's such a character. Hope your week goes smoothly for you all.

Ooh! Is that a promise Maggie? Enjoy your photography sessions.

What a shame about the catalogue - I also had a catalogue thief but it turned out to be one the wild brush turkeys that wander through the back of our property, for their nest, I presume. Only have half left now but I suppose it went for a good cause!

Love the spear - would be great as a necklace, earrings...

My sympathies over the huge amount of work that goes into a photoshoot. I'm writing a book (mine's on freeform beadweaving and color) and have new found respect for 'stepping out'. What an arduous task. Hope you are finding a bit of time to sleep and laugh. Good thing Smudge is doing his part to entertain.

Thank goodness for creatures like Smudge who make us laugh. There are two things that especially irk me about my neighbors hijacking my catalog: they don't keep their own area tidy as in debris and weed free and that the not even rotten catalog had been there since November or December! Thank everyone for the sympathy. I've decided to see what the lesson says to do and then improvise!

I recently came accross your blog and have been reading along. I thought I would leave my first comment. I dont know what to say except that I have enjoyed reading. Nice blog. I will keep visiting this blog very often.

Hi Maggie
Are you likely to let us "pre-order" the new books on the d4daisy website? Just can't wait to get my hands on both yours and Carol/Lynda's and thought you might consider some way of letting us impatient souls be first in what I'm sure will be a long queue!
Amanda