Still looking on target for next week for the books. More details of the launch and how the give-aways will work on http://www.d4daisy.com./
It feels like the longest ever gestation period - possibly similar to an elephant.

The books have both been printed, cut and folded so it is only the binding to go. Michael went to the printers today and he says they look like books already, even though the final sewing has yet to be done at the binder. He is going to send me one to look at.


I have another goody to report - some of you will know this already but we haven't told you the full excitement quota yet! We are going to merge Quiltwow into Workshop on the Web, which will grow large with lots of extra workshops and goodies. This is partly because there is such an overlap of interest and feedback from quilters indicated that they wanted innovative articles - much like the ones we love to offer on WoW. December will be the first bumper issue and we've got lots of people that both quilters and embroiderers love - such as Jan Beaney. This is a great scoop as she rarely does 'workshop' articles and I'm thrilled to have talked her into it. Add to that, articles by our own Gina Ferrari and Olga Norris (both great bloggers) and several other wonderful workshops. For the quilters, we have surface design with Ruth Issett, art into stitch with Sandra Meech and Greta Fitchett on piecing photos. That's just a few off the top of my head! If you don't know about WoW there's a super Taster at http://www.workshopontheweb.com/

The other reason for the merge is that we plan to build in video feeds - both teaching and interviews. We want to build the site into a huge combined rescource for embroiderers, quilters, paper artists and mixed media fans and all for £15.50 a year. Can't be bad.

Now I have to tell you about a disappointment. I've been lusting after a Polaroid Pogo - a diddy little handbag printer. See below. 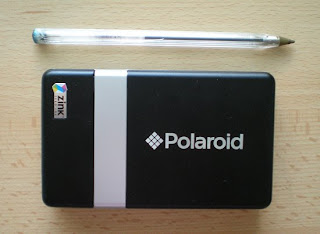 .
With this in mind I painted paper for my Oz trip sketchbook.
. 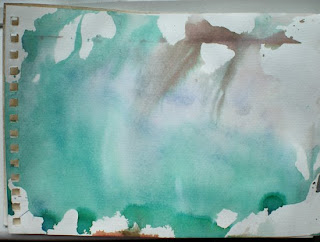 .
Then I squished (technical term) some cast paper onto the page by wetting the edges. 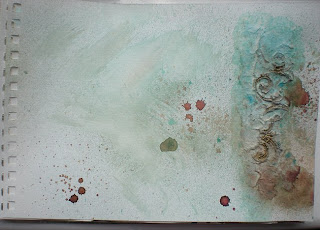 And the disappoinment - I got one and it doesn't work. It won't talk to my camera and I know that the lead is OK as I often use Pictbridge to plug into my big printer. A very nice lady is sending a replacement on Friday but now I've heard a rumour that they are to be discontinued. Anyone know about that?

Too much for one day and I've just had to re-do the entire post as blogger refused to publish it.

I have just got the email re the merger and we win,win,win, all the way I too feel excited I have been a member of both WOW and Quiltwow since they both began and have never been disappointed with any of the articles.So a huge thankyou to you and all the team that look after us. Can,t wait for the new books to hit the doormat.
Good on you Maggie.

Uhhhhhhhh... I don't subscribe to WoW or Quiltwow at the moment, on the basis that I don't have enough time to do anything much that I want to, as it is - but this seems like a brilliant idea and an unmissable opportunity. Where do we sign up..?!

So much excitement in one post! I am soooo delighted that you are merging Quiltwow and WOW. I was just on the point of joining Quiltwow but I shall wait until December now unless you have any part year offer on the go?

You will have an amazing time in Italy next year, great fun and wine! What could be better?

You must be in a spin Maggie, with all this going on. The summer school in Italy sounds fantastic - think what innovative work will be produced with all that wine flowing!! Two new books next week - Yippee! and WoW and double WoW with all those marvellous tutorials to look forward to. Hope you get your handbag printer sorted out - maybe you'll find another model if that one is discontinued.

WOW is the word Maggie, this is going to be a great resource for all of us who just want to do everything, all at once.

Gee Maggie I get tired just thinking about all that you are doing.
I received the email re WOW/QUILTWOW and I can't wait.
Oh and talk about waiting only 39 more sleeps.

Maggie - lots of really interesting news - I enjoyed reading al of it. I just thought I should tell you what I do to compose my posts. I use Windows Live Writer - you can download it for free and then use it compose your posts - you then hit the publish button and it will upload it from there. If blogger doesn't want to play bal you can save your post and then try again later. You can compose at leisure and post at leisure. I hope this is useful to you.

Sad I cant catch up with you while you are in Oz Maggie. I couldnt afford to do both quilt wow and wow and opted for wow this year so I am pleased to hear they are combining.
Have a great time in WA. And I look forward to the books coming out.

Hi Maggie,
Great news about the merging of WoW and Quiltwow i have been a member of WoW from the beginning and never been disappointed with any of the articles.Very exciting about Italy i am sure you will have a good time, helped by the wine of course.

I'm sure this post was too exciting for Blogger to digest Maggie, combined with all that wine. It all sounds too wonderful. Can't wait. I want one of those little Pogo's too. I do hope the rumour isn't true.

Thank you so much for a great talk in Horsham (U.K.) today and a wonderful, wonderful display of actual pieces. Even more impressive in actual fact than in print.
We all loved meeting you and hope that you will come again.
Sorry about the velcro!