Had a fright yesterday evening. We were in the middle of our Sunday roast (only a day late) when my daughter rang in a terrible state, as she'd just heard that her husband had had a bad car accident. We went tearing down there, luckily they live close by, and Clive took her off to the hospital while I stayed with the kids. They actually got there before Harry did. He was battered and sore but escaped very lightly, considering the state of the car.

A lorry, towing a huge trailer filled with weighty scaffolding poles, had jacknifed across the dual-carriageway and the trailer hit Harry, who was going quietly on his way in the opposite direction. It completely ripped away all the passenger side of the car. Thank God Claire and the kids weren't with him. He is very sore - those airbags make their mark, but where would he be without them?
We finally got him home just before midnight. I think he'll feel worse today when the bruises come out. He'd only just got back on the road after a previous accident - also not his fault. It is odd as he is the safest driver I know. Does make you realise what is important, though.
We will pop in with shopping for them later but in the meantime, I must finish packing for Oz. My cousin is coming to house and cat sit tomorrow and then we are off.
I have packed my little printer and am looking forward to making up some sketchbook pages. I made the sketch book, gave it a light colour spray and used a pipecleaner to bind it.
. 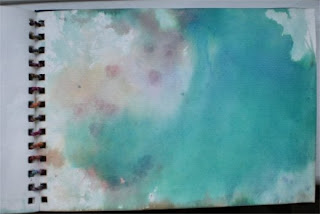 .
Thanks for comments - particularly on the books. Welcome to Gwyneth - we had such a lovely time with you in Scotland.
Sue - glad you liked your comment being shown in the book.
Hope the garden survived Maybird
Will try to post from down under and hope to see some of you at the Perth show.
Posted by Maggie Grey at 07:35

Oh Maggie! What an awful fright for you all but thank God your son-in-law is ok. He has had a very lucky escape and the shock will probably set in more today. It's true, you never know what's coming your way. I'm so pleased for you all that he is safe and it was only the car that was badly dmaged.

I hope your trip to Oz goes well and you can enjoy it.

The accident sounds horrific, he was very lucky,hope he isn't suffering too much today.
Hope you have a wonderful time in Oz.

I know how scary this is. My Sports Fan is recovering from just such an accident and has been back on the road for two weeks after two months of no driving due to multiple broken bones. Suddenly you realize just how precarious life is and how much power a careless stranger can have over your happiness and wellbeing. I'm so glad that your SIL is not worse.

Wishing a very safe, uneventful trip to you and Clive. I hope you have a wonderful time and envy all those lucky ones who get to take your workshops!

Gosh what an awful accident, thank goodness he is okay again now (almost anyway). Have a great trip out her in Oz, pity you are on the other side of the continent, but I am sure I will read all about the workshops on Doreen's blog.

He seems to be in the wrong place at the wrong time doesn't he.
I am sure that you will have a great time over here Maggie and I have only 14 more sleeps until we leave for Perth.
I can't wait.

I'm so pleased that your SIL escaped with what sound like minor injuries. You're probably right that it will hurt more today and in the coming days. A blessing that he was not more seriously injured and a smaller blessing that it happened before you left for Oz, so were here to support your daughter and see for yourself that he was ok.

Have a great trip and best wishes to your daughter and SIL.

Glad to hear Harry's guardian angel was looking out for him (twice), and hope there are no after-effects. Looking forward to hearing about your trip to Oz - have a great time!

Thank goodness your son-in-law is alright - poor chap. Claire must have been so scared for him. I love your little sketchbook and hope your trip to Oz is marvellous, as I'm sure it will be. Am flitting between your book and Lynda and Carol's, still trying to decide what to do first! It's not wise to buy two books at the same time!!

What a terrible shock for you all, hope your son in law makes a full recovery,what a lucky escape.You never know what's around the corner do you?
My hubby went at the cows with the garden broom, just as their heads were poking through!We now have a peephole in the hedge but could have been worse.
Have a great time in Oz,can't wait to hear about your adventures.

So glad that your SIL is ok, what a nasty shock for you all though. Have a good trip down-under.

I've probably missed you, but I just wanted to wish you a great time in Oz and how glad I am that your SiL was saved from further harm by the airbag. things could have been very different. Someone is looing after him.

How scary and how much it makes one realize how precious life is. So glad it had a good (though sore) ending. Hope he feels better soon and that your daughter and grandkids are doing okay too.

I am so pleased to hear that your son-in-law is recovering well and the family are OK.
Do hope you are enjoying your trip to Oz.

bit behind with my catching up. Hope you are settling well over here now - I also hope you are looking at other parts before coming here as the weather is dreadful just now. Hopefully it will put on a show for you when you arrive in WA. I am so looking forward to meeting you and doing your Tuesday class. I get to meet Doreen for the first time too.

So glad to hear your SIL is okay (thanks Claire for the catch up news). I have always said it doesn't matter how careful we are on the road it's the others we have to watch out for.