Here's my bloggy Christmas card. It shows the postbox opposite our house (so handy to have your own postbox) in the snow. Couldn't persuade a robin to pose but this chap looks quite exotic. Our new neighbours are now convinced that we are mad. 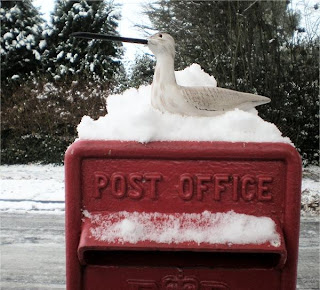 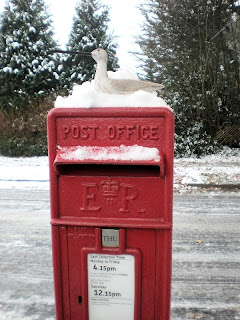 
Winners of the birdies are Sue Wild and Emma Siedle-Collins. Let me have your snail mail addys and we'll send them off.

Have a lovely Christmas everyone.

Thanks for all the great comments. Rather a lot to answer but here's a selection.

deLysia - it sounds lovely and warm where you are - our snow is still with us, now frozen hard. If it wasn't so difficult to get a flight at the moment I'd be tempted to join you.

Christine - I'm delighted that you've been inspired to join the Photoshop course. Will look out for the IKEA shortcuts bit although Clive is on strike and is never entering their portals again. I'll have to go with the girls as I've got a £10 voucher.

Smudge's antics seemed to have made you all smile. He is enjoying his new home but, even though he's now free range, he has decided to keep the indoor loo and keeps coming back in to use the litter tray. Not what I had in mind. Perhaps, as Judith suggests, it's the difficulty with the catflap.

Olivia - short legs are a certain disadvantage for doggy flaps. Do his eyes water?

Jacky - you are so cruel - but it did make me laugh.

Edie, whose dogs have outgrown their door, perhaps you could hinge it at the top - make the whole thing a dog door?

Ev - Smudge doesn't mind being laughed at - he's very into stand up comedy. Our dog used to hate it, so we had to run away and laugh somewhere else.

Clive is better - he tried gilby's stretches and they did help.

Julie - my mother had acupuncture for nerve pain after shingles. She didn't believe in 'that sort of thing' and declared that sticking pins in was a lot of nonsense. When asked why she kept going back she replied that it was the only thing that helped!

Dale - what does a myotherapist do? Fat cats are a good idea as the next step after birdies - I have tried owls and Maggie Hills suggested frogs - fun with the long legs.

Smudge misses the frogs here, as we have no pond. He had an intense personal relationship with one called Frogford in the last house. He kept fishing it out of the pond, without harming it, and they sat on the lawn together until we rescued it.

Zak - love it that you've been making birdies - these things should be shared and developed.

See you in the New Year
Posted by Maggie Grey at 12:08

I love your Christmas card Maggie and am glad that Clive is better. Keep warm and safe, and have a lovely Christmas.

Congratulations to the birdie winners! I love your shot of the postbox :-) I hope you and Clive have a very Happy and restful Christmas in your new home Maggie. x

Well, I'm absolutely delighted, thank you so much! What a fabulous extra Christmas present, can't wait to see it in real life ;)

Do you have a contact email on your blog or should I go thru D4daisy? Sorry if I'm being blind.

Very jealous of your postbox! I risk life and limb to reach ours through the snow at the moment! Lizzie

Maggie, I laughed so hard when you told the Clive & TV story on Facebook. I also just listen as I stitch, and my poor husband (Ted) keeps saying, "Why don't you just watch?" when I pepper him with questions like, "Who said that?" or "Where did that happen?"

Perhaps a new TV would increase my actual watching, too. I'll run that by Ted.

congratulations to the winners of the birdies, looking forward to the start of the online classes.
Happy and a Healthy New Year to the both of you.

Love your image and l would love to have you as my new neighbour..my sense of humour!x I have just found your blog and am about to subscribe to itxxBelated Happy New Yearxwaving from Putney in Londonxx
http://tryingtocreatearteveryday.blogspot.com
and
http://chocolatelifeandjazz.blogspot.com
xx

Maggie, I just received my new book - yours & Isobel's Mixed Media : new studio techniques and I'm in love. What a beautiful book., not just the work but the presentation is superb. And I can't believe it came so quickly given the shutdown in England because of the snow. I have several of your books and d4daisy ones also and everyone should do themselves a favor and get them in their library. Thank you for such beautiful work.