The Power of the Left

It has been one of those weeks - the kind where you wonder what else can go wrong. Then you come across someone with real problems and a sense of proportion returns. It started when we got back from our trip up north, which was lovely. We had loads of washing and it all started when the washing machine broke down in mid cycle, then the phone line went down again - the same day they sent a big bill for fixing it. The final straw was poor Smudge walking into a nest of ticks - he was like a walking blood bank and as soon as we de ticked him they struck again. So he has gone to my daughter for a holiday while we consult with the vet.

The book has been well received and I must say thank you for all the lovely emails and messages. Lessons begin towards the end of the month and we will have a d4daisy blog for communications. I have had it with Yahoo groups as the last remaining one has been attacked by spammers, won’t let me in to close it and all communications with Yahoo have failed.

However, I am over the bad bit now, my hand is improving and I can have a bath again. I have also been attempting left handed painting.
Starting with this image of birch trees, photographed by my tablet and manipulated in Photoshop touch. 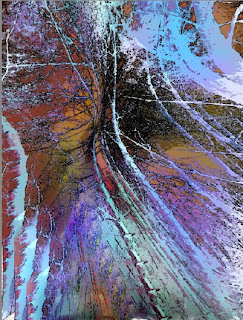 Some gesso was added to give texture.

Then some left handed drawing. 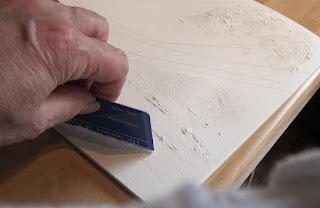 Then a series of washes using my Daniel Smith watercolours. I love ‘em. Here is the story so far. 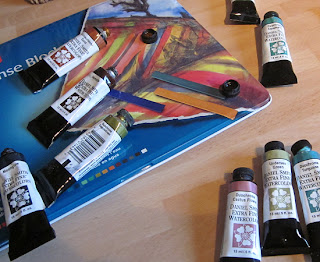 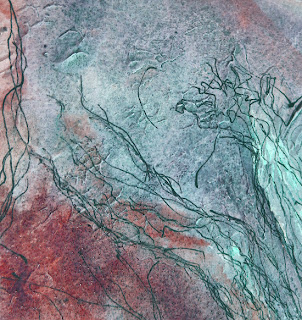 The next step will be to build up the washes of colour and see what happens. Watch this space. 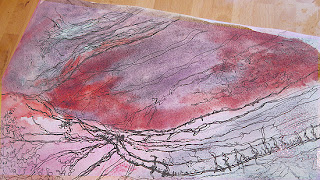 Comments
Thanks for getting the book. I hope you were all in time to get a piece of the Super film. It is really good. We had well over a hundred packs to give away but there were loads of orders on the first day. Fiona was scrupulously fair and worked from a timed list. I have to get some more Super so I will try to do another giveaway when we start the classes later this month.

What a frustrating time you are having - hope things get sorted quickly and that Smudge is none the worse for his ordeal.
So glad your hand is recovering. Your birch tree image is gorgeous and I love the colours.
I have already put your book to good use and thankyou for the freebie. I haven't decided what to use it for yet. Can't waste it by making a mistake so much thought needed!

The book arrived very quickly, and yes I had some super film. Thank you so much for a new part of my journey in textile fun.

Hi Maggie!
Thanks so much for another wonderful book - and the freebie. I hope to put it to good use some time in the future - at present in the middle of moving house....
Best, Barbara

Ooh, ticks, the Youngest, the best tick remover in the house, once had 35 to deal with at one sitting, poor Spaniel!I reacted twice last year, first time in 11 yrs & had to have antibiotics.

WOW, the book is inspiring Maggie! I ordered it Monday, wonderful Fiona emailed to say it was on it's way Tuesday, and it arrived Saturday . . . and we live in . . . New Zealand!! How amazing is that! It'd take nearly as long to organise a trip to a local bookshop!

My apology for the misplaced apostrophy! - read that as "on its way" please!

Nice the books come so quickly at home. Thanks a lot Maggie for your new inspiring boek and also this from Linda Monk. More ideas for experiment. I'm so greatful for the work of English tutors and the wish to share their knowing, what we don't find on the continent.That push me on the way of creativity. Michèle from Bruges.

rklyn donoveleMy book - and the super film - arrived the day before we went away for a week, so of course it went with me. Thank you for so much inspiration. I am so glad your hand is improving, I sympathise with you over your washing machine - ours did almost the same thing the day before we went away last year! Had to rush out and purchase a new one. Hope you phone is fixed properly this time. cheers

Sorry,I typed the check words in the wrong spot and didn't notice where they had gone! Now I have to try them again for this correction

Great book Maggie lots of inspiration here! Also really enjoyed seeing all your work in Blackpool recently we all had a great afternoon. Hope things settle down on the domestic front and that your wrist continues to improve.