Embellisher Bits and a London Trip

Chrissy - on my last embellisher course I had a lady who bought in half her apricot poodle and made a piece with it. Looked surprisingly good with a bit of greeny-blue silk. I do agree about reverse psychology for cats - it used to work well with the kids when they were young, too.
Babylock needles seem to be fine on the Pfaff embellisher and they are much stronger. Winifred Cottage sells them and, I guess, a Google would bring up other suppliers. The original Janome needles are very strong - I went a year before I broke one. Don't know whether the new, replaceable needles are equally good as they haven't sent me any yet. Must remind them. You expect to break a few needles when you start embellishing but shouldn't do so when you've got the feel of it. Sometimes though, if I'm into something really thick, I do resign myself to losing a few.
Pre-felt is a lovely soft, woolly fabric which has been lightly needled by a big commercial machine, ready to work on. I get mine by the metre from Rainbow Silks. All these suppliers are on the Workshop on the Web Traders' Mall http://www.workshopontheweb.com/. It's in the unrestricted bit.
Pre-felt is lovely to use on the embellisher. Tomorrow I'll find some pieces to show. Bit of a rush today as Clive will kill me if I don't finish my WoW article on vanishing muslin.
We had what will probably be our last day off for a while on Saturday and took the three biggest GCs to London. We drive to Richmond and get the underground there so it's not a bad journey. It was a lovely clear, sunny day so we took them on the London Eye. Clive worked in the City for years so he is a great person to go on with as he knows all the places to look for. Here we all are. 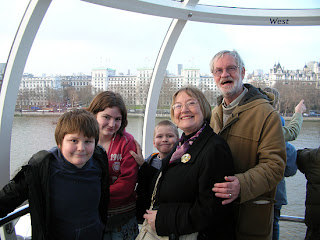 Then we had a really good lunch at Giraffe and went to Tate Modern. They loved it - especially the Louise Bourgeois spider. We had a bit of trouble with the balloons we'd acquired at lunch and had to leave them with the man at the entrance. I knew they were a mistake.
. 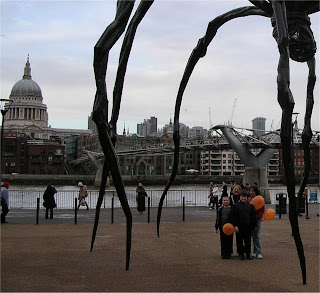 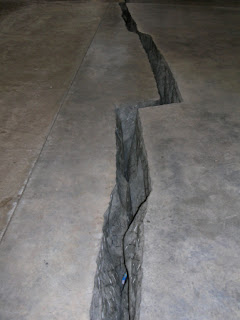 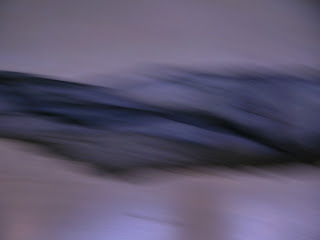 I took a 'swoopy pic' of it which came out like a landscape. 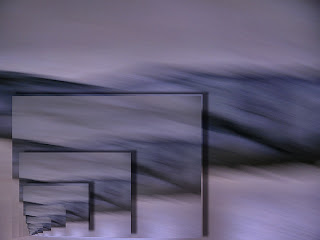 So I put it through PSPs Feedback filter and then put a drop shadow on each of the feedback pics so it looks 3D.
I may even make this - got an exhibition coming up soon.
We walked over the Millenium bridge to St Pauls where Leo found a cracked paving stone and wanted to know if it was art!
We ended the trip by hopping in a taxi to drive around Trafalgar Square and down to Buckingham Palace. Still got the balloons.
. 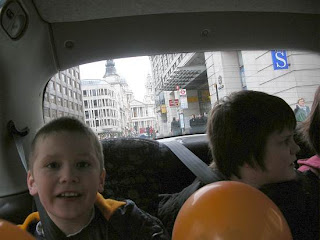 It was a lovely day and was pronounced 'Well Good' and 'Wicked', by the GCs. As we pulled in to their drive Jake said - 'What a great way to spend a Saturday'. Summed it up well, we thought.

I was hoping to go on the London eye next Saturday, but it's closed for maintenance - just my luck! As I am going to see the Terracotta Army and 'We Will Rock You', I can't complain too much. It will give me an excuse to visit again.

I love my Janome embellisher and as you say, once you get used to what it will/won't do, the needles behave themselves.

Some time ago you blogged about anti-virus software. This proved very helpful just before Christmas as I had a bit of a problem - AVG sorted it out, and I wouldn't have known about it if you'd not mentioned it - so thank you.

I also discovered 'CCleaner' which clears up the 'clutter' on the computer and speeds things up. It's worth knowing about - just google it and download, it's another free one.

How nice to be able to tag along on your trip to London. Your grand children are lovely and I'm glad you take the time to encourage their exposure to the arts. My own parents have 10 grandchildren, many of whom have an artistic bent of one kind or another. Appreciation for good art and music is a great thing to pass on from generation to generation.

I have a Janome embellisher, when I bought it, they told me, that it is the same than the Pfaff embellisher, so I guess the needles are also from Pfaff. So far I've been very lucky with the needles, but then I'm also extra careful. What do you try to embellish to make them break?

Hi Maggie
What a great day out, your GC's paid you the highest of compliments, you must have made it a VERY special day!!

You look as though you were all enjoying yourselves. Thanks for sharing your wicked day out!
I've managed to break a needle after only a few weeks with the embellisher but I think I was working too quickly. So far I'm still working with 4 needles (Janome) with no problems.

I recognised the Tate spider and the Tate Crack. My daughter was recently there (in December) and brought home pictures to share. These works are amazing. Glad the day was really enjoyed by all.

would love to see the spider, must make the effort and get down to London again. Have passed on You Make my Day Award to you, hope you don't mind

Hi Maggie
My prefelt arrived from Rainbowsilks
to-day ,but at the moment i am recovering from a very nasty flu bug
so i will have to wait to start using it.
Many thanks for the information.

Interesting story. I have been to London few times. I visited all famous London's sightseeing, such as the Big Bang, London Eye, Westminster Abbey and others. We had a nice boat trip on Themes and even excursion on Limo London around the city. I really liked London, but my first impression of London that it is so noisy there. My second, little boxes. I know that London is one of the greenest cities in the world. The eight Royal Parks alone add up to 5,000 acres. I really enjoyed my trip.