Falling at the First Fence

Glad that you are all as excited about my WoW signings as I am. I’ve just talked Ken Smith into doing a series on machine embroidery techniques - he is a real master of his craft.
Arti - you will be fine. Yes, not bombarding students with information is a good point. I find it hard, on one day workshops, when you are constantly having to interrupt people who are having fun, just to get on to the next thing.
Glad you all enjoyed the Bondaweb transfers and are having a go. It’s such fun. I have tried printing directly on to the webbing, KBP, but would warn folk that an elderly printer may get hot. You can imagine what happens to the webbing! (Been there, done that, narrowly avoided the divorce).
Becky - I’m into hand stitching too, at present, so we’ll definitely count that in. Have to do some thinking as to how we could get our round robin to work.

Carol - Know what you mean. We try not to go to bed too early as we wake up correspondingly early and getting up before six is obscene. We keep watching American detective series and going to sleep ten minutes before the end so we never find out who ’dunnit’. 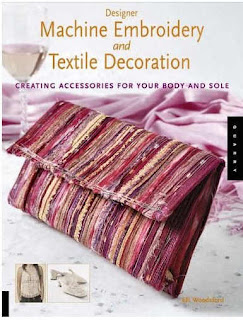 Poor cat Stevens has had to go to the vet hospital and have an endoscopy as she is still throwing up. Thank God for pet insurance. I cheered myself up by going for lunch with my friend Elli Woodsford.
You’ve probably seen her book - it’s got lots of great ideas, especially for corsets (bodies) and shoes - hence the body and sole reference. I am trying to persuade Elli to blog, as she has a wonderful turn of phrase and would keep us all amused for hours.
We met in Christchurch, a really pretty little place (even in the rain) with a lovely priory church, an interesting river and quay, Soho ( for coffee), and the Boathouse for lunch. Even went for a stroll along the convent walk - an unlikely pair of nuns.
Then Elli failed to prevent me from breaking one of my resolutions. I bought a book. Clive and I are not supposed to buy books until we have given up some of the ones we already have. To add insult to injury, it was another satellite imagery book and I have two already. In mitigation, it is much more colourful than the others and it was only 4 pounds. Here’s the cover - so stitchy. 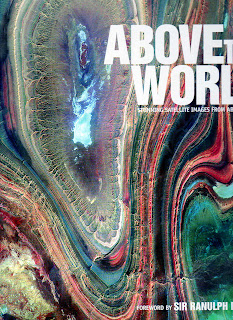 It shows much more detail (see the pyramids, below), and we spent some time looking at Sydney, Australia as I wanted to text son Ian and say ‘I can see your house from here’. 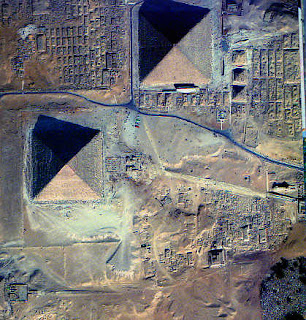 Look at the colour in this one. 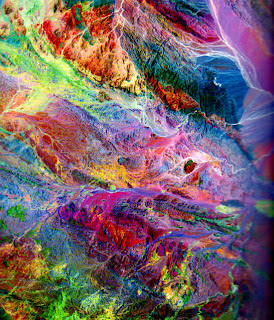 I was, of course, quite unable to avoid a bit of Displacement Map work. Here’s a Celtic scabbard design, displaced by the title page. Interesting what happens to the letters. Must try this with more text. 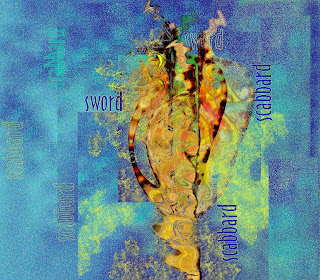 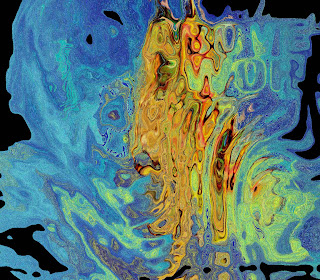 The vet has called to say that he couldn’t find anything nasty in Stevens' tum but he has taken lots of bits for biopsy and he’s sure that it will be treatable. I guess that is good news but I wanted her back cured. My confidence was rather shaken by the fact that he kept calling her HE. Understandable, with a name like Stevens but I thought they were trained to tell the difference. Just off to bring her home.
Posted by Maggie Grey at 16:55

Poor, poor Cat Stevens. I know how much she hates going to the vet in general. She must be thoroughly traumatized by now.

I have Elli's book and I love it. Such gorgeous photos and great project ideas. You should definitely convince her to blog.

Have created my blog!! Thank you for such a lovely day and for all your encouragement. I shall use the blog to chart the rise of the 'new studio'. The book was definitely a 'need' not a 'want' and can thus be justified!! Some great work will come of it. Hope you like my posting name..couldn't resist it!

Have realised that it should be 'little sort of lady thing'

If you enjoy satellite imagery do NOT visit Google Earth - you'll never leave!!!

I hope your furbaby is feeling better soon! It is so much more uncomfortable when they're ill than when we ourselves are. All the furkids at Hootenanny Hollow are rooting for her!

Any chance you can share the ISBN for the satellite imagery book?

And, in case you need a bit of enabling - http://bookmooch.com is a terrific site for trading books - so you're really not *buying* them.... LOL!

Hi Maggie - that middle photo has SUCH wonderful colours!! So inspirational. Buying books is never a sin :) - food for the soul.

Sorry about your cat - you would have thought the vet might have spotted he was a she. Sigh. I'm having similar traumas with dear old Dylan at the moment. He is undergoing tests for Cushings syndrome, but we have a feeling his kidneys are failing. It's such a pity animals can't speak!! I love the images - absolutely beautiful and full of potential. I might just have to go and browse in Waterstones later on!