Many thanks for all the messages. I am a bit better today having found a ‘magic’ rubbing in cream. It was actually prescribed for Clive (I know you shouldn’t take other people’s meds but it was only Ibuprofen) and it did seem to work wonders.
Clive does the stretching exercises - guess I should be doing them, too.
Extra thanks to folk who are organising some pics of Prism, especially Louise, who is sending a CD. I have already done the exhibitions bit of WoW but thought it would be great to show a little Prism as well.
Anabelle - thanks. Meant to acknowledge you for pinching your 'comments on comments' phrase. So fitting. Loved the tale about the dog and the peanut. www.thewitteringrainbow.blogspot.com/
Water Soluble paper. I don’t find that I need to cover the surface before pushing the pulp on to it. The paper needs to be really dry before removal and, if it is a very intricate surface, I use the point of the scissors to ease it away. If it comes to it, you can always wash it away, so it won’t hurt the mould.
Becky - the inside of the paper, next to the mould is the surface that takes the detailed impression. The other side may have some shape but not much detail.
I do love these paper casts. I know you can do the same with handmade paper but, because the water soluble is designed to be washed away, it takes up so much more detail. Plus, you don’t have to fiddle around mashing up fibres. It is quite strong if painted with acrylics and my first step is always to paint it white - even if I am leaving it white it still benefits from a coat of acrylic paint.
Here are my fossils, painted white, then ochre, then with grey mica. They were too dark so I used Liming wax, followed by Verdigris and Blue Moon and a little copper wax. Jane Wild showed me how to use Liming wax - she has done some lovely stuff with it. 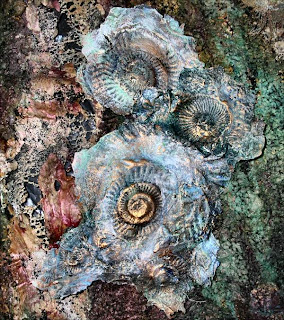 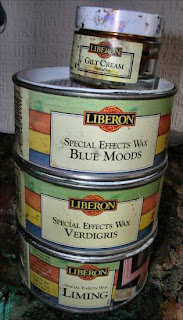 This is the one straight off the fossil. It looks convex in this pic but the surface is actually concave. 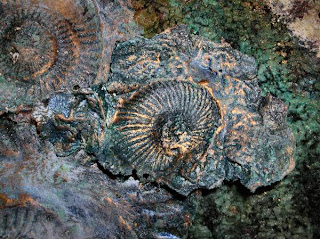 This one was from the Softsculpt - not quite such detail, but still OK. They look much more metallic in the close up than they really are. 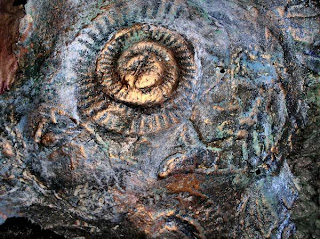 Hope to be fit enough to machine it all together this afternoon. That will be the background done.

Mix-pix tagged me so I will do the seven things about me, but will decline the passing on bit.

Clive used to be my boss (he says that has now been reversed).

I used to own a horse. I spent a lot of time on the ground instead of on the horse. Hence the bad back.

I love pickled walnuts (rats' brains, as my son calls them).

Clive and I used to run a Gateway club for handicapped people. It was huge fun and that was where I first taught crafts.

I have two (much loved) wicked step-children as well as a much loved daughter.

I’ve climbed an Australian mountain (OK, it was a small one) with Jan and Jean, looking at rock art and eagles.

I used to have a proper job advising people how to buy commercial property as part of their pension fund.

My very best idea, ever (Workshop on the Web), was thought up in the bath.

Actually, I think that is eight but having toiled over them I shan’t delete one.

I agree about Workshop on the Web Maggie definitely the best idea.

After I read and commented on your bad back post I slipped on the ice and pulled my left hamstring muscle, so I can REALLY sympathize now. I cannot sit up, put on my own pants or shoes, and sudden movements elicit screams. I am home from work today with hopes of improvement using ice and naproxen sodium. I'm planning to visit the company doctor and the chiropractor as soon as the ice abates and I feel like I can get around without falling again. I hate winter!

what a lovely post Maggie, I love you're fossils but the seven (eight) weird things about you are great. These "tags" are always very nice because you get to know people in another way.

Sorry about your back. Clive is right. You must do the excerises to improve the muscle tone, and revent injuries. Selfishly, I notice you are posting more. As I love to read your posts, this bad back of yours is a bonus for me. I love to see your ideas develop through your sketches and your samples.. Thanks for your inspiration.

The fossils are superb , I have done the same tecnique using dampened loo roll and gesso for strength before painting works well Pippa

Poor Maggie - I feel so sorry for you.
Maggie, Workshop on the Web is the reason why I got a computer! A friend (computer literate) had been given a subscription for Christmas and when she showed me the first issue I resolved there and then that I had to have it for myself. Of course, first get your computer....So you could say that my first subscription had considerable hidden costs not to mention the extreme angst getting to grips with a computer.
I do not regret it for one second.
Thank you so much, Maggie (and Clive)

Thank you for the link maggie. I wondered why my blog counter had gone mad - I haven't posted for a couple of days. Glad you're on the mend - don't do anything daft (for a few days anyway!)