Bet you wondered where I was this week. One of my new year’s resolutions was to see more of the GCs this year. They grow up so quickly and it won’t be long before it will be deeply uncool to be seen with us. So we spent two consecutive days doing things with them, followed by two days getting over it! More on this plus our chatty bits later.
I have finished the big piece, now entitled ‘Earth Series: Triangular Disintegration’. Since you last saw it I have rotated the main piece 90 degrees so it looked more like strata and it has been joined by two wings which are more fragile and have triangular holes. Here is the main piece. 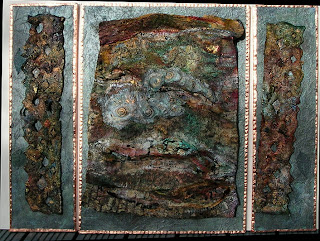 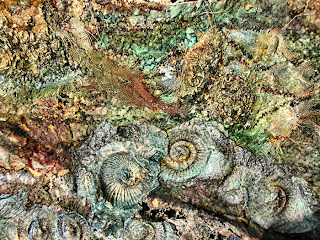 The triangular shapes of the wings were cut out with a soldering iron and then some were buttonhole stitched and applied back on top. Some of the holes have cast paper fossils peeping through and some are left void to show disintegration.

It was intended to convey how fragile the earth is but it turned out a little heavier than it was supposed to be. I mounted it on wood (god bless the woodworking son-in-law) covered with tissue and emulsion paint, followed by ink and coloured waxes. I don’t like my textiles behind glass, although I do sometimes glaze pieces intended to sell as some people prefer them this way. I don’t expect to sell this piece although I shall price it for the exhibition. I must now make some more saleable textiles. I still want to use the original design - this piece is not a good example of design led working, but it was fun to be free to follow where it led.
Comments.
Artisue I always start with a teaching plan. I often get side tracked but it helps to have a logical progression. Make sure the students know what they are aiming for and give a very brief outline of the steps they will take to get there. It’s a fine line between having too many breaks for demonstrating and leaving the class for so long that the fast ones get bored. If any ingredient is vital to the outcome take a little extra along for anyone who inadvertantly brought the wrong thing. Enthusiasm for the subject is the main requirement and I know you have that - you’ll be fine. Anyone else got any tips or comments - I’d welcome a view from the student perception.
Dale - I loved the pintuck part of the course and some of our folk got very creative with them. When you dismiss the idea of working them in straight lines it becomes very interesting.
Gosh, you really need to get stitching, Wabbit. I am having trouble with my new laptop talking to my sewing machines. Not all of them have a patch for Vista yet. At the moment I seem to be using three computers to get a design on my Bernina!
It’s not the being touched part of massage that is the problem, Wabbit - I’m a hugger, too. It’s the sitting still that gets me.
Margaret - the useful men. It used to be my natural charm but now it’s old age!!!!
There was a comment on the TV about that sunset, something to do with the way the cloud was moving and the reflected light. Dorothy got a super photo of the orange effect. It was certainly weird.
Time out
We took the three boys to the Arundel duck place but it was absolutely freezing. The kids were really good but I grizzled a lot. On the way home we stopped at Chichester, intending to force down a bit of culture via the cathedral, but it was closed for a concert.
As we walked around the close Toby (5) appeared to be making very rude signs at people. It transpired that he was very taken with a statue of Richard of Chichester giving a blessing. Hence the two fingers.
Next day the girls and I had a stitching day. 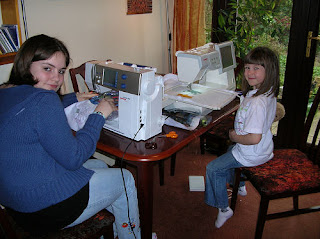 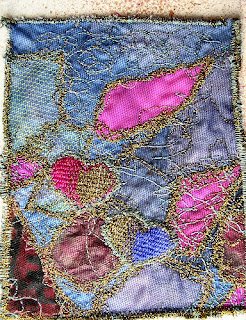 Sophie’s approach to stitching (both feet on the pedal and give it some wellie), really tested the machine. She is six, so had to have a pile of books under the foot pedal. I was surprised how well they both did but it was exhausting and Clive had to cook the dinner.
Posted by Maggie Grey at 11:01

Its so lovely to see your grandchildren getting so creative and involved, we really must encourage the new generation into Textile Art. My daughter has actually said she will accompany me to the excel show next week - the first time she's ever shown any interest in 16 years so there's hope for us all!

Thanks for another lovely post Maggie and thanks for the sky comment, I'll try and look into it and yes I saw Dorothy's sky too. Lovely.
That book by Lauren is really good.

It is wonderful you spending this sort of extended time with your grandchildren, and how lovely for them to have a gran who encourages them to explore their own creativity without getting all fussed about mess making or some such. Good for you.

Thank you very much for the workshop pointers. I shall print them out and refer to them during my planning.

Your fossils piece is simply awesome.

I love the textures in the latest piece. wonderful, having taken a weekend class with you a few years ago, I think you get the balance just right, the grandchildren are obviously following in your footsteps

The piece is beautiful! It was so interesting to see it progress. Thank you for sharing that, Maggie.

I did set up the machine and get stitching last night. In my last machine mastery class, we did some free-motion quilting which I decided would be perfect for some pages based on Matisse I need to do. So now I've got four little mixed media WIPs (works in progress). Thank you for the encouragement. I'll take some photos and blog about it later.

I'm a geek and haven't decided to brave Vista yet. I am hoping to avoid it until they work out most of the bugs. The machines did talk to each other once, they just will not now. The manufacturer's troubleshooting directions were distinctly unhelpful as any geek could have foretold, but I gave them a shot despite common sense. So I'll have to experiment. I'm thinking of dedicating an old laptop to embroidery. Thank you for the encouragement.

I suspect that none of your readers/students will be surprised that you have a problem sitting still! You are a most prolific person for which we are grateful since you also share your ideas.

Keep working on the GCs. I got interested in art when my mother (a painter) took me to see a traveling show of Van Gogh's works at our local art museum when I was about 10. You never know what will spark their enthusiasm.

Love your earth piece Maggie, how large is large?
Re student feedback I found with Dale's frescoes and fragments workshop, we started with a technique (or several) and went off with the materials to interpret. When I was after a bit more inspiration, there were all Dale's samples, but also the WIP of the class was quite stimulating, as there was such variation!
Great to see the girls getting into the sewing, but what about the boys?? One of my sons has shown a lot of interest in sewing.

When I look at the centrepiece I see emerging for sure a grin and then can locate eyes. Old Father Time? Just another way of looking at it. Really wonderful work!