Thanks for comments on the video. I think Bonnie did it really well. We were very squashed together and she said that, as this violated one's personal space, the natural reaction is to move away. To counteract this Bonnie said she would prod me with her elbow and I was to move closer. You can see this happening - it's like Pavlov's dogs - I must be easy to condition. Hope it doesn't happen on a bus - I might be arrested.

Ann - aka wild child, we had been leaving our catalogues out to overwinter. There have been hysterical stories of stolen catalogues, divorces due to husbands binning catalogues and so on.

Even if the cat seems as hard as a rock, it can usually be cut to reveal layers below which won't be so hard.

I like 'Death by Art' - could also be accidental art.

Can't you wet the pieces Robin? Then squish them together.

Wabbit is sure she can knock up another catalogue soon, so I haven't got to send her one. Clive is disappointed - he said he couldn't wait to see what I put on the Customs declaration!

Today's catalogue workshop was supposed to have stitching in it but it ran away from me and got itself finished without any. Next week's curly pager will absolutely certainly have stitching.

I love today's effort, which was inspired by the two image that appeared as a result of the weathering process. As one of them resembled a Madonna I decided to go for an iconic theme. The catalogue was used just as it was - no gesso. 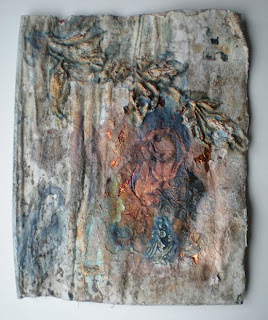 The pic below shows the Madonna and the two weird 'watching' figures. 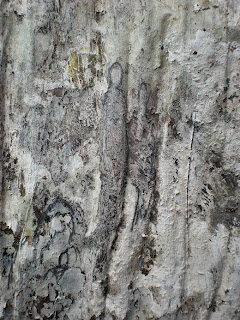 .
I scanned in a couple of designs from my icon sketchbook. There are plenty in Google images - many copyright free. The one shown below is just printed on ordinary printer paper. 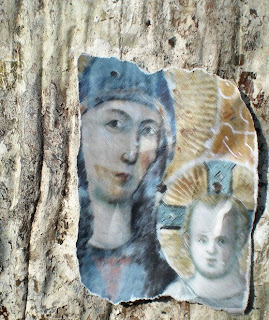 .
That was OK but the thought of a gleam of metal was appealing, so I stuck tissue paper to A4 printer paper, using a glue-stick around the edges. Various rips are to be encouraged, as it is going to be stuck to metal foil. 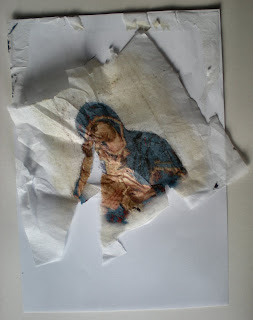 .
I used very thin copper foil rather than metal shim. I wonder if chocolate foil would work - could be worth a try and such a good excuse to eat chocky. Golden gel was used to secure the tissue to the foil. A soft metallic glow comes through the fine tissue. 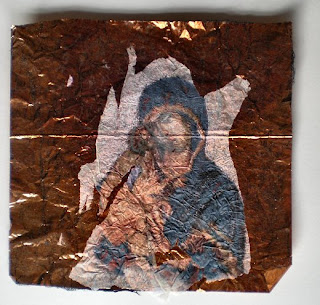 .
The metal was torn into a rectangle and various places were tried on the background. Luckily my watchers were in a good place and I avoided sticking it over them. 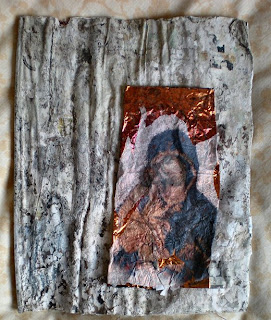 .
A strong glue is best for sticking the metal to the catalogue. I used Bostic, a contact adhesive - these have a strong smell. I use a scrap of Vilene as a spreader. 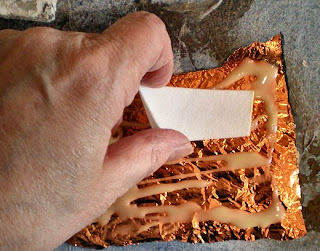 .
Put in place on the background and then rub all over the metal. It will follow any undulations in the catalogue. Be careful not to rub away the tissue - at the end this will need a matt varnish.
.
I didn't want to overload the piece with bits and bobs but I found this wonderful piece of cast paper, made from a large metal block with a leaf design. It already had a pale blue colouration from the metal block. As yesterday, it was glued and wet around the edges to integerate it. 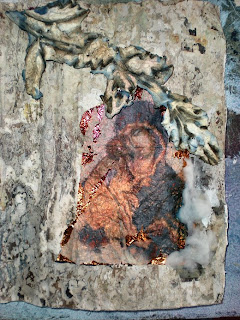 .
Further integration took the form of damping water-soluble paper and pressing it around the edge of the metal to soften it. A little dilute walnut ink was dripped onto the wet paper. This was the only colouring used in the whole piece. 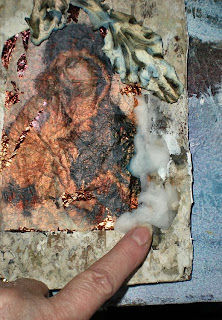 .
The final touch was to use Aquarelle crayons to emphasise the background figures a little and then a little metallic gold wax was applied to the leaves and some of the background.
. 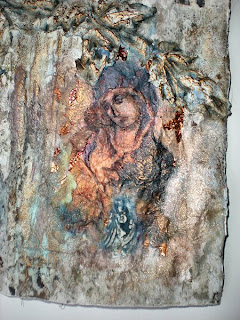 .
This piece looks even better in the flesh as the foil gleams so beautifully.
That's it for this week - I'm off to do a talk in Bromley tomorrow.
Posted by Maggie Grey at 07:29

Your killed catalogues look very much like snow gums, a species of eucalypt. I must see if mine are the same colouring.
Thanks for all the inspiration

Thankyou Maggie for explaining about the catalogue - I am going to bury one in the compost heap!

Hi Maggie
have done a couple of catalogue pages, pictures on my blog and in Catalogue Killers Album.
Enjoy your talk in Bromley

I love your Icon catalogue - I have gessoed and sprayed my No.1 and am trying to decide what to add to it. I have put a picture on my blog and will post again when it is complete. Hope your talk goes well.

I shal go an wet my catalogue thoroughly to see if I can stick it together a bit. Love the icon. Cheers, Robin

Love the Icon, just wish my life wasnt quite so complicated at the moment and I could get on with doing it but all printed off and saved.
We have thank goodness finished daylight saving today, it was so dark when I got up in the morning it was silly, no saving of daylight at all. going for as long as we have this year has been ridiculous. Now of course the body needs to get back into the normal rhythims. Grand children for the holidays and it rained for the first time in ages, wouldnt you know.

I had to laugh and join Clive in wondering what on earth you would have put on the customs form. I have a bad habit of shoving catalogs I think I'll look at later into the side of my armchair. After a while, they get fairly beat up. I've got an idea how to 'weather' these pre-tortured catalogs and will report on the experiment.

Thanks for your comment - I can't resist a challenge so a face it will be. I don't have a scanner or printer so will have to do it the hard way. I may be gone some time!!

I have nominated your blog to receive the Kreative Blogger Award. I'd be amazed if that hasn't happened many times already! Your blog and books are so inspiring. And I am always charmed by your generous spirit.

There are of course a few duties involved... for the details please check today's entry on my blog.

This is fantastic! Mine will be coming out shortly too. I've bought some new Gesso especially for this. My old one was a cheapie and didn't work very well. I'm going to look for some inspiration by studying the shapes on mine.
Have a good Easter.

Oh! I should have read this before I commented on the previous post, Clive and I must think alike.

This is an amazing piece! I am new to your blog so I am not quilt sure what type of catalog you use but I think I get it.......

This is fantastic. It resonates with me particularly because I'm looking at icons myself atm. I have been mulling over the combination of metallics with muted colours, this is giving me inspiration.