Well here we go for the first catalogue bashing blog. Bear in mind that everyone’s catalogue will be different, so there will be several blogs over the coming week or two, all featuring different methods. My first one uses no stitch at all, although this could easily be added.
This is the plainest of my catalogues. It is quite thin (I ripped one in two) and very stiff and cardboard-like. A lot of the text has worn away and it was very dirty. I disinfected it and gave it a really good brush with wire - see Monday’s blog
. 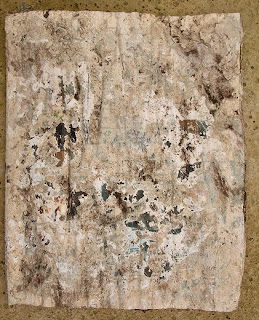 1) I wanted to cut an area out to be a focal point so, using a craft knife I cut down into the surface. Although a hard surface this proved quite easy (when past the outer layer) and a rectangle was cut away. I had intended to set an icon image in here but, as it had torn quite flakily and looked good, it was decided to leave it as it was. The piece that was cut out was kept for later. 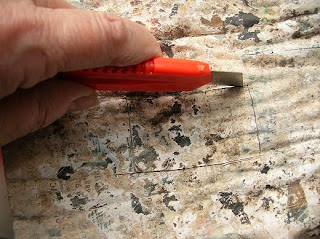 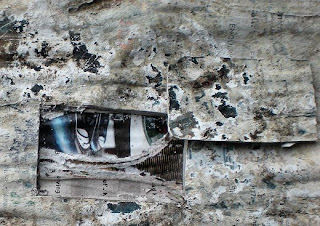 .
2). The whole thing was then given a very light coat of gesso, missing out in some places where there was text. 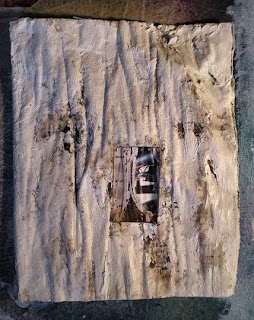 .
3).Followed by a light spray of diluted Quink ink and Moonshadow Mist. 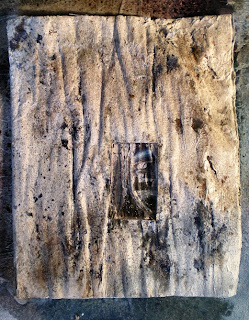 .
Then it was off to the bits and bobs box - aka the failed experiments stash. Here all kinds of little treasures are to be found - pieces of cast water soluble, snippets of Tyvek, metal shim etc. 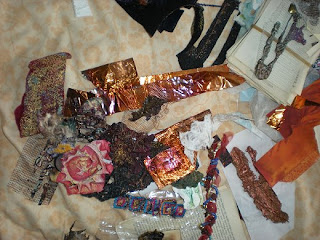 .
4). One of the biggest mistakes made in composition is to apply too many embellishments to the surface. I am as guilty as anyone and sometimes I hear Val’s voice in my head saying ‘You’ve got everything but the kitchen sink here, Maggie’. So,wanting to keep the austere look of the piece, just two items were selected - a piece of cast paper and some melted embossing powder on scrim - just paint on parchment paper, sprinkle with UTEE and melt. Dip scrim into it while hot. MIND YOUR FINGERS - HOT!
. 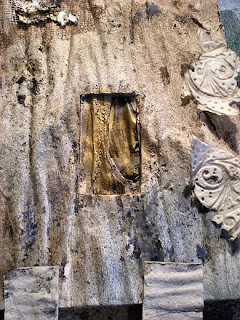 5). The cast paper was made from one of the mini moulding mats so it was ideal for a border. I broke it in two and glued it to the catalogue with Golden gel (any glue would do here) .
. 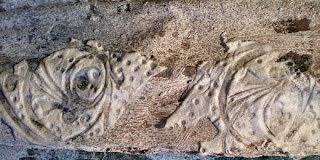 .
6). It is essential that elements such as this look as though they form part of the base and, to this end, the edges of the cast paper were wetted and ‘squashed’ into the catalogue. This took a while to dry 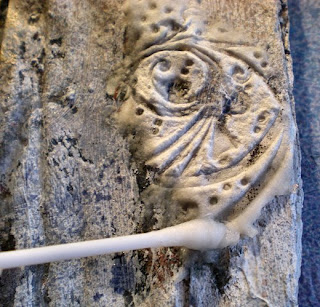 
7). The central area that was cut out earlier had metallic wax rubbed into it - gold acrylic paint could be used instead. This must be allowed to dry, preferably overnight
. 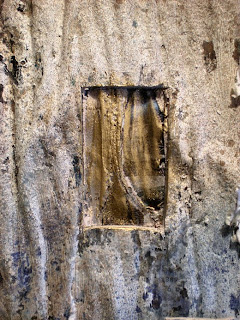 .
8). Now try using spirit dyes or Adirondack Alcohol Inks on top of the gold wax/paint. If you haven’t used these before go to the free taster on www.workshopontheweb.com where there is a tutorial. I squeezed a little stonewash blue over part of the surface and then used red pepper on top, straight away so they bled into each other. 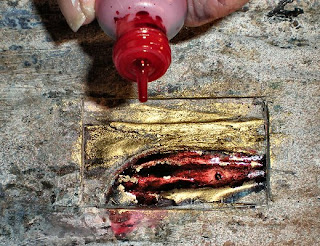 9). I then made three little frames from the rectangle cut out in step 1. It was cut into three and the middles removed to form the tiny frames. Three little scraps of colourful catalogue (from the gouged out bit) were then used as the base and the frames stuck on top, with a cut out of Grungeboard to make them stronger.
. 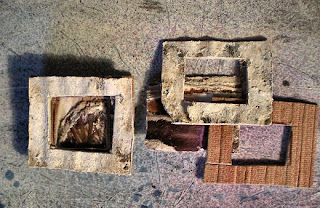 10).They were too proud and stuck up too far so I took the craft knife and cut into the catalogue again so that two of them could nestle.
That’s this catalogue finished. Here it is, together with a detail of my favourite bit. 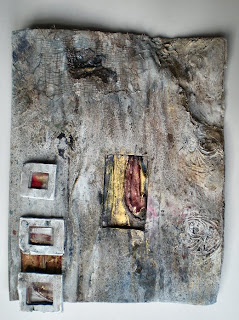 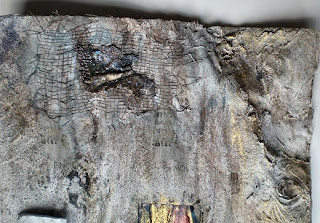 Tomorrow I’ll post about a variant of this catalogue method and next week I’ll do a curly page one. Here’s a quick flash of tomorrow's method, in which the colours revealed some interesting areas. One looked like a Madonna. Can you see her? there are also a couple of creepy 'watchers' looking on.
. 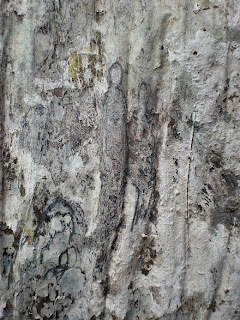 In the meantime, happy killing.

Today has been a long time coming LOL! This looks an exciting way of treating the catalogue, it looks almost like fabric with the crinkles in the surface. It will be great to use up some of the experiments we've been doing too :o) Thank you Maggie. I know what I will be doing on Saturday :o)

This is absolutely beautiful and so helpful to have a step=by-step lesson - but as I am a new follower to your blog, Maggie, I am not sure of the catalyst to this piece - an old catalogue ??? I would love to know.

At a quick glance this looks fascinating, one of my cataloques is like concrete so I think I will be taking this very slowly. Looking forward to seeing and hearing you on Saturday.

Well worth waiting for Mags. hopefully will have time this afternoon to play.

I've just been around the garden to collect the "bodies"! They are now ready for their "autopsy". I believe the Coroner will be bringing a verdict of "Death by Art"
best wishes

Fascinating Maggie, I will need to start again to kill another catalogue though - mine is literally in small pieces sitting on a platter!! Cheers,Robin

Who would have thought that a once soggy, dirty catalogue could become a thing of beauty. I doubt that mine will look as good, but I'll have a great time trying.

Thanks Maggie - once again an inspirational lesson with the catalogue. The only problem I will have is deciding which one to do as I have only put one catalogue out to 'die'.I think some more catalogues will be finding their way out into the garden to be killed.

So inspiring but so frustrating because due to the ceaseless Scottish rain my catalogue has "gone beyond" and had to be poured away. Also I was delighted to discover you are doing a class in my part of the forest in September, only to have my hopes dashed by discovering it is on the very day my inconsiderate son is getting married. Now - difficult decision ...!

I have just come home following your talk to our Guild here in Audlem, what a wonderful morning we have had just about to go and put some old catalogues out, what fun

Thank you once again for a wonderful morning