The next catalogue tutorial is so big that I’ve had to do it in two parts. I have invented a new technique of catalogue carving. The first part is coming along below.

But I must tell you that the first glimpse of the new books - Stitching the Textured Surface by Lynda Monk and Carol Mcfee and my Stitches, Straps and Layers – can be seen on the d4daisy site. http://www.d4daisy.com/

For those who have requested it there is also a ‘Tell me when they’re ready’ button so we can email you when the books are available. I’d advise you to get on the list as I’m planning lots of prizes for those ordering on the first day – goody bags of materials, ATCs and postcards plus some pieces of work. Such excitement.

Thanks for the Easter wishes, Scissors

The leaves were actually printed on the cellophane Aussie Jo. They did a bit of a disappearing act when I zapped it with a heat gun, so I’m trying an iron.

Becky –glad you like our bits of nonsense. Yes, we buried our catalogues in the autumn and there have been some hilarious incidents with them. More details on the d4daisy site – follow the links through to the free classes – you don’t need the passwords for the catalogue info.

Perhaps undulating is a better description. Here is what it looked like at the beginning. It has been disinfected, dried and brushed. It has two interesting little dips for treasures. I want to work to a Celtic theme so I shall have to make them jewelled spirals, I think.
. 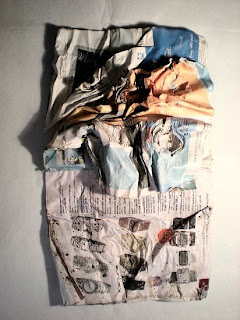 .
Using a craft knife I carved the bottom into points that hung over the lower page.
. 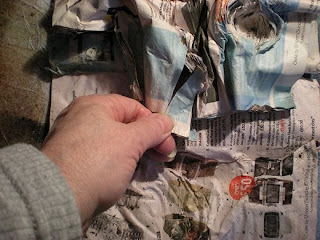 .
At this point it was discovered that shaving into the curves produced an interesting surface, resembling rock strata.
. 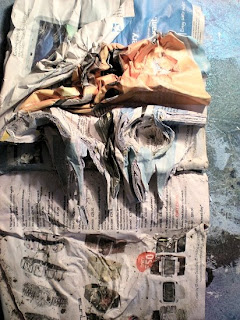 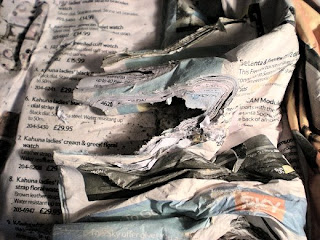 .
Then it was out with the Hearty clay - papery stuff aka Model Soft or Model Magic. I flattened a walnut sized piece and pressed rubber stamps into it, using suitable swirly patterns and a Sherrill Kahn droopy bit that I'm fond of.
. 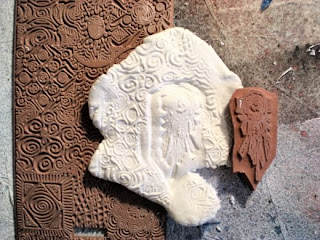 .
This piece was pushed onto the left top corner of the catalogue. I used a little Golden Matte gel on the page to make it stick and then pressed the edges of the clay to mould it around the corner. The stamp was pressed into the edges where the pattern had been disturbed. This method is easier than sticking it first and then stamping but that is an option on awkward surfaces.
. 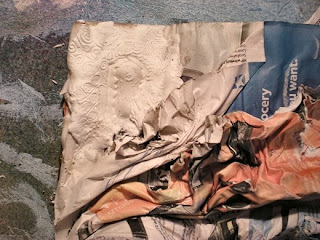 .
Now off to the experiments box to find something to take the lower part down. Just the thing -a piece of water soluble paper reinforced with kozo fibres.
. 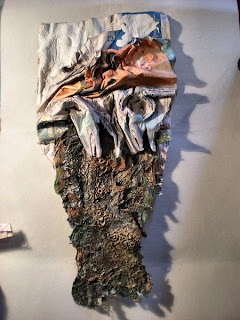 .
I painted the Hearty at the top with acrylic paint in dark turquoise and black. When it was dry I used gold metallic wax. I will probably paint the papery areas like this too, but I'm keeping my options open at present.
. 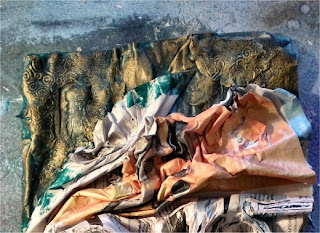 .
The bottom section already had some motifs but I added two Celtic ones by squashing a stencil into Hearty clay..
. 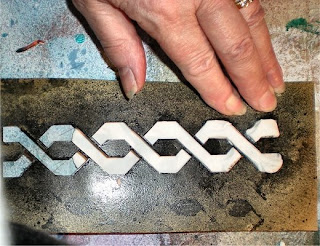 .
This was applied to the papery surface by pressing the edges into the base and, when quite dry, doing some stitching. I left it a little flaky and lifting in some areas. It will be painted with acrylics to match the base.
. 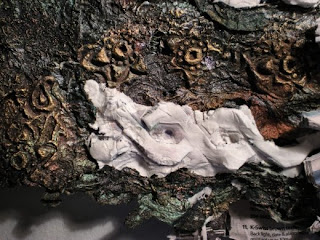 .
So that's where we are at the moment. the next blog, in a few days should see the finished piece.
. 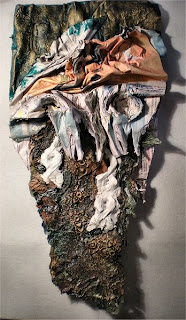 .
Hope you are enjoying these catalogue tales. They have been a bit of a marathon to write, but I'm learning lots. Can't see me teaching workshops on it though - the students would need 6 months notice.
.
Posted by Maggie Grey at 08:17

Hi Maggie
have added my name to list for new books, need to order in some more hearty clay now.
Have a good week

Hi Maggie,
I have added my name to the list for the new book.

Amazing what you can do with a killed catalogue. BUT I'll have to start again my catalogue was too smelly to use, I mustn't have disinfected it enough :(

Couldn't add my name to the list for new books - for some reason it wouldn't let me. Your altered dead catalogue is wonderful - no-one would dream what it originated from. I have discarded my first face and am planning another attempt. I have two lovely distorted catalogue bits (it fell in half) waiting to be turned into things of beauty.

Hi Maggie
It could be that folk are having problems using the "Let me know" buttons on the d4daisy site if they haven't got Outlook configured as their email client. It might be better if the link button could perhaps take them to a form? Failing that, perhaps you could just add a line about sending an email to Fiona@d4daisy.com if the buttons don't work for them(as I've done).

Incidentally, I've just realised that clicking on the "Contact Us" tab assumes Outlook is configured as the email client too, which will also cause problems for those out there who're not terribly web savvy.

Tell me to mind my own business if you like - I won't mind! Just wanted to make sure no one misses out on another one of your fabulous books through technophobia!

Yes, feel free to email Fiona at
d4daisy. Loads of emails coming through, so most people seem to be OK. Michael Wicks Mac isn't configured to Outlook, nor are lots of our test machines and it's fine on them so seems to be an isolated 'weirdie'. Not that you're a weirdie Heather - just your problem!

Isn't the work from Lynda and Carol great? I'm writing an article about them for Stitch magazine, based on blogging and Cyber Fyber and how amazing it is that they have only met about six times.

I've signed up for the new book too Maggie! :o) I had a problem signing up too but it worked once I clicked through to the actual order type page. I sent an email to Fiona. I had to copy and paste the email addy as I'm not set up for Outlook either.

My catalogue is a bit high too! I may have to rewet it to disinfect it before I start.

Thank you for doing all this extra work Maggie. We are learning so much.

Found a bit of my catalogue left by the turkeys in next door's garden (woo hoo!) so quickly retrieved - my neighbour was highly amused.
This piece will be wonderful, Maggie. I couldn't imagine where you'd take it but it's just great.
Have signed up for the books too.

Ooh Maggie, your work is so inspiring. How wonderful that you put your art and your heart out there for all these web crawlers like me to share. I'm loving what you're doing to your dead catalogue and look forward to seeing how you resurrect it into something delicious.
Suzanna
http://alteredego.typepad.com/

My catalogue (magazine) is very chunky, so this looks like the way to go.
Some people might like to look at the work of book sculptor Nicholas Jones for inspiration (there are photos and link on my blog, just ignore the error message and click on the sidebar). He has some amazing carving on paper.

P.S. I'd already sent an email to go on the list a week ago

I'm way behind - on everything actually - but specifically on my catalog degeneration. Still looks like a wet catalog with all colors in tact. Will catch up in time.

One of my favorite words: 'undulation'! I use it all of the time in my freeform beadweaving classes. Guess it's uncommon though - some students actually looked it up to make sure it was a word!

Hi Maggie-
Wow-what amazing transformations! Our area received so much snow this year that my catalog is now mulch for the tulips-couldn't find it again after the first 6 inches. But next fall and EARLY winter will see me try again. With a tall stake marking the spot.Would love to know how you store your pre-created bits and how you know where they are!? Looking forward to more,more,more. Thanks!

I haven't been in cyberspace for ages, but wow! what you can do with these weathered catalogues blows my mind, I'm going to have to get on and put some out for this winter, didn't think this was my thing, but as always you inspire me to think past the square,you are such a talented lady. I will learn patients waiting for my catalogues to weather.

Very interesting, lots of thought and imagination has gone into this.I am looking forward to next Saturday hearing you speak at Rheghed.Celtic work is a favourite of mine, I'm sure you know!

I love your killed catalogues and would love to have a go at this myself. I have a couple of questions that I cannot find answers to in your blog.
How long do you bury them for and what material do you bury them in?
How do you sterilize them?

I've never heard of this idea, of using a magazine/catalogue to create a piece of textured work from.
Looks great though. I've got lots of old mags from shops that could use a bit of the opposite of tlc.