Nearly time for the books

It's been a while but the book factory is in full swing. Mine has gone to be printed. It took a long time because it grew another sixteen pages one night when no-one was looking. It was the straps section, which was supposed to be small, but I made too many and the designer made it look so good.

So it's all my fault that it costs another £2. Sorry! The cost of printing has gone up amazingly since last time around - they say it is the paper, but they always say that.

Lynda and Carol's is well under way and I'm hoping for a launch later this month. Theirs looks amazing - even the designer, who is used to seeing wonderful stuff, was drooling over the images.
Other good news is that Jae Maries book has arrived and MW has nearly finished the photos. It is so very good. I always know when a book is really special as I keep wanting to leap up and try things when I'm editing it. So many books. so little time.
I've been to Urchfont Manor with the text21 group. We didn't have a tutor so we did our own thing. The weekend was supposed to be concentrating on the word 'Reflections' so I made this piece. Title 'Leaf Reflections'. It is part of a series on fractured pattern that I play with every now and again. I took it to the Beyond Stitch group on Monday and my friend Monica bought it.
. 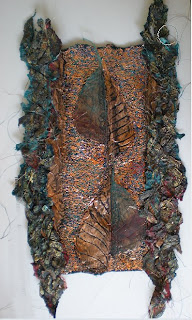 .
Jane Wild was doing some great stuff at Urchfont. Here's her water-colour take on Modigliani.
. 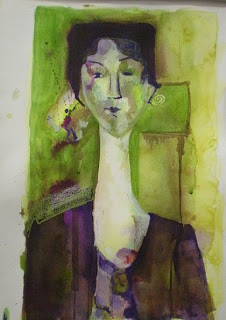 .
Then she produced this amazing charcoal drawing. 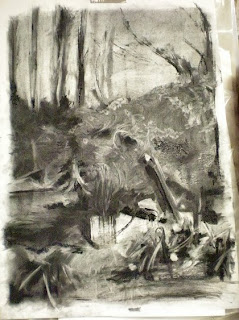 And started working into this water-colour based on it. 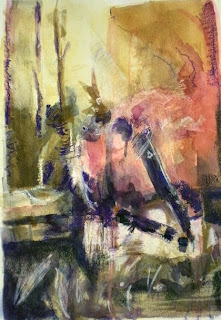 Your comments were, as usual, very welcome.

Heather - I don't think I can slow down but I don't seem to have as much energy as I used to.

Doreen - been doing some more planning for the workshop. I am teachine this workshop at Art Van Go next month, so I'll have had some practice. They always get some lovely talented ladies.
Thank you Diana - so glad you enjoyed the talk.
You should try the family history Margaret. The princess thing was a bit of a fluke but I was also fascinated by my grandfather's history. He came from a long line of ship builders from Sunderland. His father was a ship's carpenter and moved to London around the time they stopped building wooden ships. He is then shown on the census returns as a joiner, so I guess he re-invented himself. When we go to Scotland in September we plan to break the journey in Tyneside and investigate. I find the social history quite fascinating.

Beverly - stamp on the catalogue a bit - like treading grapes. I am dying to get back to mine, but can't see it happening before we go to Oz.

Thanks Heather - I've never had so many lovely comments about WoW so I think it must be an especially good issue.

Becky - I'll take a photo for the next blog but the pawprints are a bit blobby where I tried to rub them off. TWWSIL (the wood working son-in-law) is bringing some solvent so I'll have to take it before he attacks. Did you get my email about writing an article? If not, email me on maggie@workshopontheweb.com.

I have to tell you that Smudge has been so horrid that he has gone back to boot camp (my daughter, who bred him) to be sorted out. A form of respite care, as we nearly strangled him. For a cat who's had the chop, he seems to have an excess of testosterone and last Friday he completely terrorised poor Stevens, caught two frogs and four baby birds (we rescued two which seemed OK), bit Clive and was generally obnoxious. Hopefully being with his parents and aunties will teach him a lesson.
Went for a great walk, quite early today in my new Fit-flops. They are supposed to give a full work-out to the legs and bum - just by walking. They were obtained, at a very good price, by Fiona who is now my personal shopper. I'll let you know how they work.

It has been very hot for almost a week but the common, close to our house, was cool and shady. The rhododendrons look lovely. They have pulled a lot up but left a few deep banks. Lovely colours.
. 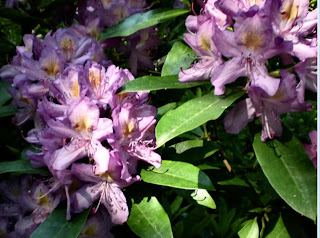 .
The sun is on the trees across the pond - making it all hazy. They have done a lot of work on our common and manicured it a bit too much but the pond is a good idea. 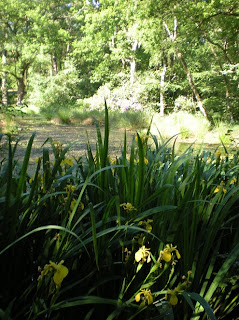 .
The flag irises look as though they have been here forever but were only planted last year.
. 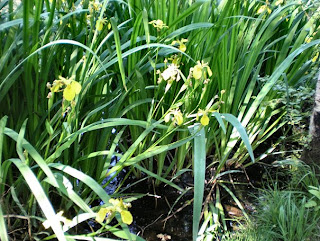 .
Does anyone else have to put full stops in to stop the pics climbing up each other? I find it so annoying.
Posted by Maggie Grey at 10:15

I had no idea that three women could induce such a state of quivering anticipation in the rest of us!!! Love your Leaf Reflections and Jane Wild's charcoal drawing is superb. One of my greatgrandfathers was a marquetry cutter - don't think he'd be impressed by my latest catalogue effort. I'll try and post it on my blog tomorrow or Friday. The common sounds idyllic - lovely photos - nature will soon reclaim the too tidy bits. Hope Smudge returns home suitably chastened - bad boy - cats are a law unto themselves aren't they?

Hi Maggie
Love the charcoal and water colour pieces of work,looking forward to the new book. Warm sunny day ,garden seat, new book and a glass of cold white wine. What more could you want in life.
Love Gill Boyle.

Can't wait for the Jae Maries book. I've heard her talk a couple of times and she's so interesting about her work. Any chance on a book from either Nicola Henley or Jeanette Appleton sometime? I think their work is amazing and there's nothing out there just on them. Hope Smudge returns a reformed pussy- but I wouldn't hold my breath. He seems to be quite a charecter.

I think you are right about Smudge, Heather. My daughter (the one who breeds rag-dolls) reckons she has worked out what's wrong with him - he's a vampire.

Now I've read this, I'm even more annoyed that I'm having to miss your talk & workshop here in September because I too come from a long line of Sunderland shipbuilders - maybe we could be related!

I love your blog because it always makes me smile. Pictures climbing up each other? I can't say I've ever had that happen but I'm quite wishing I had now!

I hope Smudge comes back a redeemed character, or you may have to put him in therapy!

And I'm glad about your book because the section on straps is the bit I want to read most.

Oh, and I meant to say how much I love Jane Wild's pictures, does she have a blog?

Lovely work Maggie, I have fixed 3 of my catalogues onto canvas, pics on my blog,
have a great weekend and hope Smudge comes home a well behaved cat.

I forgot to mention that i have finished my last catalogue and posted the result on the group site.My next catalogues are still in the garden and not quite ready for use.Do hope Smudge is a better cat when he arrives home.

You've been missed! But worth the wait. Your new work is lovely and I had a good laugh about poor Smudge's antics. Jae gaev a great talk at the Wales Regional Day and I can't wait for all the new books. I shall just have to save my pennies.

Naughty Smudge! It must be the time of year, we are getting daily offerings of shrews from our cat Daisy. I also struggle with placing photos and often resort to full stops, can't understand why it is so fiddly. Looking forward to the books!