Where does the time go? It's been a busy week, getting unpacked from the Festival of Quilts and planning a trip to Scotland next week. I'm in Peebles, doing a talk and seminar followed by a workshop. It will be great to catch up with my friend Kathy, editor of Stitch magazine, and to see all the lasses up there (note - I'm practising my accent). I haven't done this workshop (which is on using metal in textiles) for ages and have lots of new ideas. This not only means rewriting the handouts but also doing lots of preparations as I want to bring in water soluble paper and there isn't time for it to dry. So I'm doing enough for everybody, all ready to paint. Such dedication!

Smudge came home for a few days and settled straight back in, although he did seem quieter than usual. He is still a bad boy for fighting and has had multiple punch-ups with his dad while he was away. After a trip to the vet for his injections he went back to Claire as we are still away a lot. It does give poor Cat Stevens some peace. As you can see he hasn't lost weight. 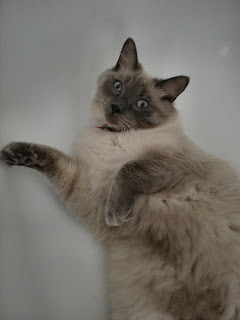 .
Yesterday we went to the Arboretum at Westonbirt in Gloucestershire with Fiona and Sophie. The wood-working son-in-law (wwsil) has a stand at the Festival of the Tree, showing his hand-made planes. All the demonstrators were camping and Phil had decided to splash out on a camp bed, rather than an inflatable mattress. Unfortunately it was too big for his tent and he had to sleep with his feet sticking out. He was doing well but we thought that it wasn't such a good show as last year. Might have been the weather, of course. The Morris dancers were good. 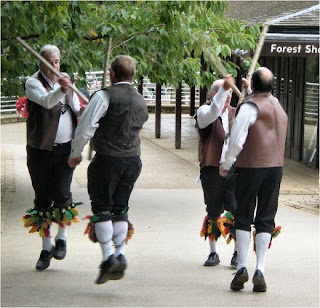 .
This guy's coat reminded me of a piece of work I once made with lots of dangling tatty bits. 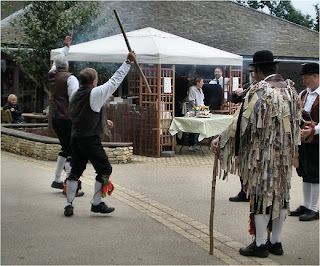 The rescued owls were lovely. Look at the patterns on this short-eared owl (I think that is what it was - it did have short ears!) 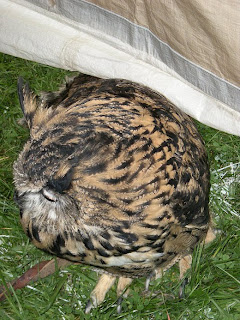 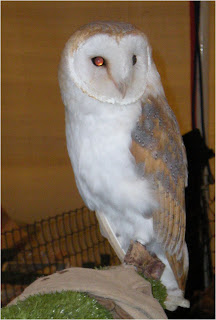 The one above looks very wise. There were lots of stands that all seemed the same and I think they should combine it with textiles to sharpen it up a bit. It cost us £25 to go in, quite a lot of money.
I met a stitchy friend, Yvonne, which was good and Sophie liked the Punch and Judy and the swing-boats. It was a long damp drive home and we cheered ourselves up by lighting the new wood-burning stove and settling down with the Sunday papers. We were soon roasting but it was lovely.
Posted by Maggie Grey at 10:11

If only I had known you were going to Westonbirt I could have come and said Hello! Mind you if we all did that you'd never get any time off at all. I love the Morris dancer's shaggy coat and those owls are gorgeous - barn owls are my favourites. There are so many events on this weekend in this area that audiences must be thinly spread. Good luck in Peebles - I'm sure the workshop will be marvellous.

Have a great time in Scotland, look forward to seeing pics.

Curling up in front of a wood burning stove sounds lovely! Have a great time in Scotland.

"Lots of new ideas", oh Maggie, I do so wish I didn't have to go away next week! Hope you enjoy your sojourn amongst the Borders lassies (though not a lot of us in the local EG actually are from the Borders!) and please come back soon!

I've just had a quick whizz through the new WOW classes, and as ever they are looking great. I just need a couple of extra hours each day to fit everything in! Thankyou to everyone involved in producing the classes not forgetting yourself.