Thanks for all messages of goodwill about the house. No news, apart from several enormous forms from our solicitor, which we have just returned. I have been really busy getting WoW done and getting the book off to the designer - it is probably good to be busy.
.
Gina - I'm sure that Jane would be happy for you to use the drawing exercise. It is fun and it's great seeing what other people have produced.
.
Castaway - no, it wasn't out of date - I got it new from AVG so really can't think why it wouldn't work.
.
Glad you liked Highcliffe Amo. I sold two pieces in the end and loads of books, so it was very good.
.
While filling in the solicitor's forms and looking at the dates, we suddenly realised that last Friday was our Silver Wedding Anniversary. Now most people would have been planning a 'do' for ages but things like that just seem to pass us by. I phoned the girls and suggested they come over for a quick take-away but Fiona insisted we went over there and she produced a great instant party, complete with selected best friends, and we all had a wonderful time. In the end it was better than anything we could have planned.
.
On Saturday night we took GC Lauren and her new guy to see a local outdoor production of Romeo and Juliet. It was really well done and the kids thought it was wonderful. Lauren's new fella is the one that I think is too old for her, but Fiona says 'He's got a job, he can buy her things, he's got a car, he can drive her around. What's not to like?' I have to say that he is a lovely lad, polite but not too shy, and very funny. I hope that he is not bad news for next year's A levels!
In the programme was a plea from the costume mistress for fabrics so that's just the right timing for all my cupboard clearing.
.
I love the work of Nikki Parmenter - she makes the most amazing 3D pieces. I'm doing a talk on 'The Third Dimension' for the Festival of Quilts and thought I'd put in this piece of hers. Amazing isn't it?
. 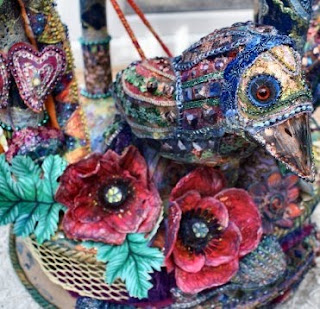 .
She is doing a WoW workshop for me on making the flowers. It will be in December's issue. I wonder where I'll be living then? 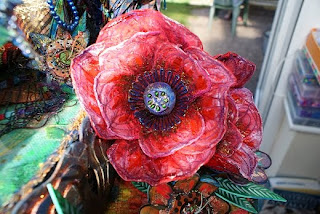 .
Probably still here!
.
Has anyone tried those mi-fi dongle things? It's a device, the size of a small phone that turns you into a wi-fi hotspot (provided you give people the password). It can be used with all devices - laptops iphones etc. My free year of 3g internet comes to an end on my iphone soon so I thought this would be a good solution, supposed to be faster than the usual USB dongle - especially if we move.
Posted by Maggie Grey at 15:22

Hi Maggie, I was really happy to see you again at Sian's summer school at Urchfont! Good luck with your house sale, I'm keeping my fingers crossed for the greatest deal ever in these dire crisis time. Love Daniela from Rome

It's definitely good to be busy while waiting for a house sale, otherwise stress levels can rise alarmingly! That's probably why we're still here after 30yrs even though I dream of a bungalow with a small garden. Congratulations on your Silver Wedding anniversary - glad the celebrations were so lovely. Nikki Parmenter's 3D piece is stunning. No speaky mi-fi speak so I can't help you there - sorry. I'm sure your younger and more 'with it' followers will be able to offer good advice.

I hope you're happily in your new home by December. Very Happy Anniversary wishes for last Friday. See you at Festival of Quilts :)

hope the house sale is progressing - I am going to FOQ over 3 days so will pop and say Hi!

Hmmm 'dongle' sounds a bit rude!!
Congrats on the silver, sometimes spontaneous parties are more fun than those you labour over.

I have a biggish one coming up shortly, my present is attending the Geelong forum and then maybe just out for tea locallly for immediate family, as Geelong is going to be closed off for the big bike race.

Good idea to take your mind off the house and do other things. No point stressing over something that is out of your control.