Giveaway and the Big Day

Before I launch into the latest happenings ‘chez grey’, I have to tell you that there is a book giveaway going on – we have copies of Stitch, Cloth, Shimmer and Shine, the new Sarah Lawrence book (so sad to think that it is her last), Stitch Magic from Alison Reid and Creating Felt Pictures by Andrea Hunter. If you haven't already done so on Facebook, just leave a comment to be placed into the hat.

I am working on the free classes for the Dissolvable Delights book and getting excited about solubles and rusting powder.
. 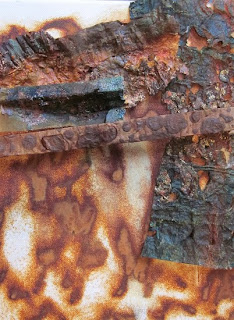 .
Combining them with metal shim and rusted toffee papers is creating some great textures. It is so useful to be able to overflow books into classes as there are always more explorations than one book can contain.
. 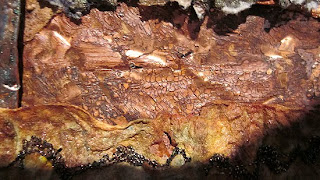 Gilby found the ‘let me know’ button for my new book before I knew there was one. Clive had just uploaded it. I think that merits an extra prize in the giveaway – let me know your snail mail.

Anyone who hasn’t already found it, go to www.d4daisy.com and we’ll tell you when it is ready. No obligation to buy. I do hope the video idea works – Michael is deep into the pics for the book so I won’t know for a few weeks, but I am hopeful.

We have a very exciting day tomorrow. First we have a rehearsal for our evening singing do – Chalk Legends at the Corn Exchange Sturminster Newton, Dorset. Since we discovered that it is being recorded by BBC3 we have all become much more focused, but it is also rather nerve wracking.

We are singing with an offshoot from the Bournemouth Symphony Orchestra and also doing ‘Sway’ with a swing band. It is a big choir when all the little groups merge, so hopefully the others will all be better than we are.

After the morning rehearsal, we are going to the private view of Yvonne Morton’s new exhibition at Sladers Yard, West Bay, Dorset. I am so looking forward to that. Following on from her previous themes of protection, she is now focusing on the old London Foundling’s Hospital. I can see the relationaship and I shall report back in next week’s blog. Here is a piece from her new work.
. 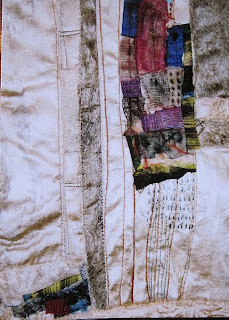 .
From there, having grabbed lunch, we head off for another rehearsal, with both the bands. Then comes the performance. Quite a day, eh? Jane Wild, whom we dragged along to singing, is also going to all venues so she has nobly offered to drive us ‘oldies’ about. She has offered us rugs! Jane, as I’m sure you know, is a great artist and now has proved to have a lovely voice. So much talent in one person!

Will be back when recovered. Could take a week or so.

We had a dog who smiled too, Heather. Frightened the paper boy, no end.

I do look a little static in the pic, Dorothy – rather solemn, too.

Julie – good luck with the bathroom. One of the worst rooms for us as we had so many problems, mostly to do with all the fittings not fitting. I think the plumber has since retired!

Smudge has become nocturnal since he had his new door, Wabbit. He is now even more of a hard case and I can tell when he has been fighting as his ruff gets chewed, presumably by the other cat trying to bite his neck. Or perhaps it is a vampire.

Jordi – glad you enjoy Smudge – haven’t seen much dog action lately from your blog. Our son in Oz has a Portuguese Water Dog - must be related? Also enjoying your song lyric journal, especially the Cohen. Clive reckons that he is the last poet standing and has just got his new album.
Posted by Maggie Grey at 08:17

I love those wonderful crunchy textures you have achieved - I just want to reach out and touch them. Can't wait to find out about the techniques.
Enjoy your very busy 'big day' and I am sure the concert/recording will be a great success.

It is always great to learn some more techniques. And the photo with rust is very inspiring. See my blog for a rusted quilt. And I am addicted to books. So perhaps this time I will be the lucky one?
And enjoy the rehearsel.
gr. Marjolijn

I would love to be in the give away, Smudges ruff is incredible.

How saddened I was to hear of the passing of Sarah Lawrence. I had been giving a workshop and told the ladies that she had an on line shop and if they were having difficulty in getting supplies that they should try Sarah. I was quite shocked to read that she had passed away.
I would like her book. Are you selling it or should I go to her on line shop?
I have put my name down for your new book. It looks great. I can use up all this stuff that I have accumulated over the years.
I am sure your concert will be a huge success.
Diane

Looking forward to the new book and those wonderful crunchy techniques. I suppose I will now have to start eating lots of toffees!!!
Jean

Lovely samples, hope you're having some wonderful singing tonight!

I hope you get to hear when your singing will be on the TV. It sounds very exciting. Hope today went well with rehearsals and the exhibition. The rusty textures look gorgeous. I bought some stitchable metal shim a few weeks ago but not only have I not used it yet I don't know where I put it! That's what you get for sorting out the studio!

Well, you have had your big day now, I hope it was a great success and that you all enjoyed the singing - I know you will have enjoyed the exhibition! Those techniques look very tempting, can't wait for the new book to appear. Good luck with your hand surgery. Cheers

Like Marjolein I am addicted to textile books. I also have a few books of your hand. And this book looks great. The rusty piece is beautiful.