You may well wonder where I have been - it's all Google's fault. It locked me out of my blog and whatever I tried I couldn't get in. It helpfully suggested signing out and then in again but every machine I tried on had the wrong user name and wouldn't let me change it. I am now blogging on a very ancient laptop which let me in. This could be my incentive to move to wordpress, which I've heard is better. Anyone able to confirm that?


Anyway I haven't been idle as I've given three talks in the last ten days to some delightful branches, one of which was Winchester where I met up with my old mate, Dodie, who is back from the wilds of Cornwall. We tried to have lunch at a pub next to the talk venue but they were unable to serve us as their computerised tills were down. They had the food and the cooks but not the initiative to take orders. Ain't that daft? Anyway we went elsewhere and had a great chat and a good meal. We did our C&G together so lots to talk about.

I have been crocheting with Perle cotton, as the grandaughter expressed an interest. She is a great knitter and is coming with me to the K&S in a couple of weeks. That will be fun. 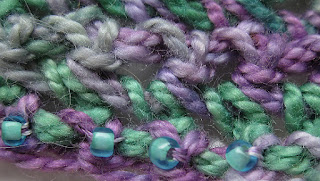 I have made the front and back of an amulet purse and mounted it on water soluble film so that I can bead it more easily. I also think that the film, if I leave a little bit in, will make it firmer. Quite enjoying this. I have written an article for Stitch on making amulet purses as I enjoyed the ones I made for the Dissolvable Delights book (www.d4daisy.com), especial;y the metal shim ones. 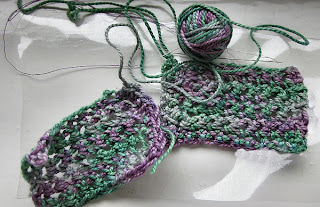 We have also moved more than 400 d4daisy books to a new home. This took four days and involved two vans, two grandchildren, some casual help and a lot of cobwebs. the new storage is much better so it is a relief really. 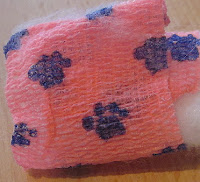 There has also been a Smudge drama which you may have seen on Facebook. He was found on Sunday, after a major search, in a corner of the green house nursing a very bloody paw. Off to the vets (Sunday fees, of course) and a lot of swearing (Smudge, not us), some shaving, an anaesthetic, and many injections, he was home again. The vet thinks it was a fight - I'm not sure and I do wonder if the fox got hold of him.

He had the sweetest bandage - a bit pretty for a boy - see right but it did have little pawprints on it. 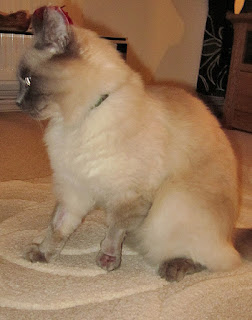 He had his leg shaved and now looks as though he is wearing a glove.
Anyway we have been back to the vet today and he is progressing well. Following the visit to the vet he went under the bed and this is all that has been seen since - a small lump of fur protruding from the throw. 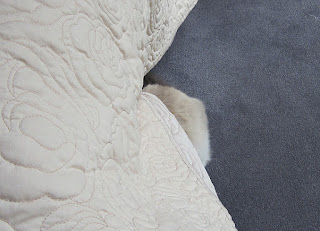 Do hope to back with a normal blog soon. Off to do some work on Lynda Monk's new book. Exciting stuff.
Posted by Maggie Grey at 12:34

I have my personal blogs on Blogger, but used WordPress to set up a website as part of the coursework for the Eastleigh FDA. Is Wordpress better? Depends what you mean by 'better'! it's more sophisticated but i haven't found it easy to use - lots of choices but using them is not intuitive. I won't be moving my personal blogs over there anytime soon.

Winchester Discovery Centre has run courses on how to use Wordpress, if that tells you anything. A fellow student took one and found it helpful, but unfortunately I missed it.

Google does seem to have a mind of it's own at times but I daren't change because I'm used to it!
Love the amulet purse.
Poor Smudge - such loss of dignity with that girly bandage, no wonder he hid under the bed.

Poor old Smudge. He does get himself into some pickles, doesn't he? Our foster dog, Carl, has a big nose that leads him into trouble all the time. He does envy Smudge's pretty bandage. At 120 pounds, he could carry it off but his troubles only earn him a bad scolding by moi.

I know people who swear by Wordpress and others who say it is not less of a pain as Blogspot. I do know that it has an awful lot of updates as we have to install them for the blog from my old Weavers Guild in Ohio for whom I donate the webhosting.

Oh dear, when I get sick of my problems with Blogger, I often think of changing to Wordpress, but after reading the comments I think I shall stick with the devil I know (or sort of know). Poor Smudge, I do hope he is nearly better. The amulet purses are great. Cheers

Regarding blogger: As a reader, I hate it! I often sign on before six am, and am frustrated in an attempt to open blogger spots: I click the title, it opens for two seconds, and then shuts me out. again and again, spot after spot. When I am successful, I find navigating the spots to be very slow. Posting comments is a discouraging activity, because the coded words used to prove I am not a robot are often so hard to make out that I abandon the effort. Well, whatever the problems involved, I continue to enjoy your blog!!!!