Interesting comments from the last post - I'll do them at the end, if that is OK.

I have had the most tremendous sort-out and declutter in the workroom. Everything got shoved in anyhow when we moved (two years ago in November) and there never seemed to be time to straighten it out. My aim was to move another desk in so that I could have my sewing machine next to my laptop and transfer designs. I had a neat little USB stick once upon a time but it disappeared in the aforementioned move. Voila! 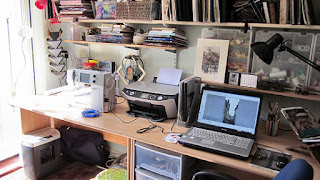 So now I can get on with some digitizing and I thought I'd start with my looking through designs from the last blog. I scanned in a simplified version of the centre of the image and it looks OK on the printout. 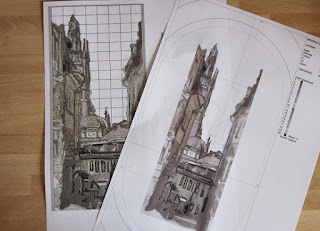 The sewing machine pic looks fine so I shall stitch it out on lutrador as I want something that won't fray when I cut it out. Haven't tried this before so I will keep you posted. The plan is to free machine the two sides and blend them into the centre stitching.

Jane Wild gave me a lovely image of the Duomo in Florence that she had taken from a strange angle (it was this that gave me the idea). This is a photo of the printout, ready to be drawn into. 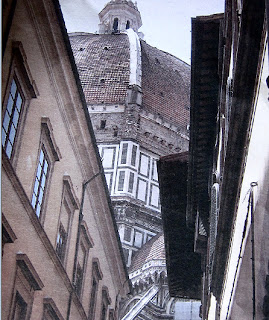 Must point out to Olga that my 'cheating' idea is nothing to do computer design but involves straight from camera photo prints or photocopies. Having struggled for years to overcome the idea of computer use, especially when transferred to a sewing machine, as 'not real design' I'm not backing down now!

I will show how this print turns out next time.

can't resist showing the other side of the workroom. Rushed out and purchased lots of see through boxes for my art stuff. I still have too much even after a relentless chuck out. 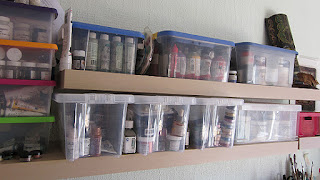 I will look for that book Aussie Jo. There are some superbly illustrated cheldren's books out now.

The Quest was a great success and the kids are already badgering for another. It was based on Harry Potter's Voldemort capturing three grannies and tying them to their beds. Various spells had to done on the way along the trail, Magic beans (aka M&Ms) had to be eaten to awake dormant powers (Clive had the job of creeping into bushes and hiding these) and items had to be collected. Then they had to find a large bush of wild convulvulous flowers