Guzzisue - how lovely to have an award - and all for just rambling on. Thank you. I will have to have a big think as to who to pass it on to. Thanks to everyone who left a comment. It really does make my day to hear from you all.


Janet - glad the AVG info came in handy. Sorry you missed the Eye but, as you say, it’s a great excuse to go back. Will look into Ccleaner but I don’t think I’ve had time to get this machine dirty yet.


Pascale - the Janome needles are much stronger than the Pfaff, I don’t think the machines are the same but I don’t know the Pfaff embellisher that well. I love my old Pfaff sewing machine - the 7570 and still use it for free machining, even though I have newer and posher machines.


I do hope that you are soon well enough to play with pre-felts, Gilby. They are especially good with soft woolly fibres.


I have been AWOL for the last couple of days as I had a nasty run-in with the dentist. Some of you may remember that this saga has been running for a while.

I was supposed to have a tooth crowned but it was such a long time between the tooth cracking and the coronation that a lot more bits fell off it. I really thought he would just take it out and I think that, at the half way stage, we both wished he had. Apart from the fact that it was right at the back, and difficult to get at, the drill started playing up. I’d just been telling him about all my recent equipment failures so he blamed me.Anyway it is half done and does feel a little better today.

I have set myself a new challenge. During the recent cupboard cleaning I filled a box with an assortment of half stitched textiles. Here are some of them. 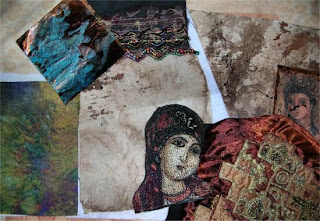 I have given myself two months to make them into something or I have to throw them out. It would have been one month but this is the busy month for WoW and Quiltwow.


I have assembled three sets that might work together. Here’s the most likely one. A tissue on felt background, a heavily machined icon face and a border that I made for Val’s edges and finished book. 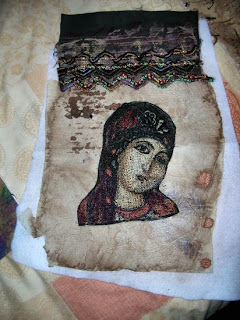 I have an idea for this combination, too. It is painted metal shim and a computer print on brown paper with black Mistee fuse ironed on top. 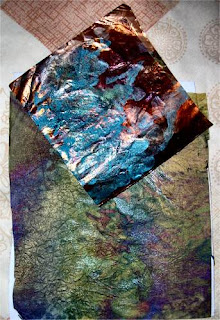 This one may be a real challenge. Another icon on shim, lightly stitched to brown paper and a strange mixture of puff paint and stitch. Can’t think how this is going to work. 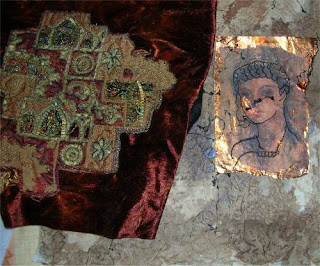 I’ll keep you posted on all these.

For my New Year’s resolution I have vowed to tick off one thing a month from my ‘been meaning to do it for ages’ list. So far we have achieved two - one was the Wi Fi thing, and now, finally, (roll of drums) I have ordered my groceries on-line from Tesco. It worked and they arrived. Now all I have to do is to pop into Tesco for all the things I forgot to put on the list.

Painted metal shim. How interesting. I met Alysn Midgelow-Marsden at K&S, became fascinated with her book and made a metal wall hanging. I couldn't bring myself to sew metal with my machine but I could spray paint metal screen, but interesting pieces of metal at the craft store, and hand 'sew' them together with wire. I like this piece so much it's in my living room instead of the garden as intended. Painted metal shim - I must try this for the next piece.

I prefer to have children than having a bad tooth ache. It's a good idea to combine all these UFOs together. I don't know where I had my head when I told you about my Janome embellisher, in fact it's a Husqvarna. I have an Elna sewing machine and I'm very happy with it. Yesterday I subscribed to workshopontheweb and it's just great. Embroidery works are just very traditional in Luxembourg, so the internet is a great thing.

I have nominated you for the Make my Day award... please visit my blog for details.
Best wishes
Maggie

Hi Maggie,
I need to do a copycat thing with UFO's! Good luck with yours... your starts look good to me... but then what doe I know? grin
The Tesco thing gets easier if you keep doing it as the site rembemers whet you last ordered and you can do it more easily next time!
Dorothy

I appreciated ordering groceries online when I had an infant! It was a shame when my local supermarket stopped this service.

Can I volunteer to be your rubbish bin in 2 months if you have bits to throw away?!!

Oh no, don't throw them out! I would also be a happy recipient if you don't manage to finish them yourself. I would of course send you something in return, but probably more of an arty thing than textiles as you are so accomplished at textiles and I am a beginner. My art is better :)

i have read your book raising the surface with machine embroidary and loved it but did not understand whgat you ment by "zapping" the fabric with a heat gun? thanks