The Book is Here

Hooray - the Image to Stitch book is here at last. Penny - so glad you are enjoying it - you Aussies have stolen a march on us as it got held up at the port over here. But now we have it and Fiona will be in touch with those on her list. More info - or order - from http://www.imagetostitch.com/

Back to Penny - I wrote it to be as unspecific regarding programs as possible - more about exciting things to print on in a fuss-free way. Well that is what I aimed for, anyway.

Thanks for all those wonderful comments. I think we may have done with Displacement for the moment. I think the last few ideas show that you should never use just one effect when fifty will do!

Genie - I’m glad you liked the Stitch article. I wanted to give Urchfont a bit of a boost as it is such a wonderful place and the courses are all first class. I don’t teach at residential colleges these days but when I did, this was my favourite. The open day is July 6th and I’m looking forward to that.

PJ - We used to teach classes on computer design down here in Dorset but we lost our venue and anything involving computers is so expensive to hire that we don’t do it now. I have taught it in Oz - at the Horsham Forum - a couple of years ago. The computers at the venue were very poor and they couldn’t find us a working inkjet printer so we couldn’t do anything with the designs. It was still good fun as Jan and Jean were there and we did a lot of catching up. A good place for all things to do with computer design is http://www.ctdg.org.uk/

Aussie Jo - you got it! Both the question and the answer.

Cathy - did love the chimney piece and the comment came through, fine. I’ve put a label on the camera whooshing technique so it should pop up when you click - let me know if it doesn’t. Such fun to see you all in Kent.

Wabbit - love the transfers you’ve been doing and must have a bash. I’m a big fan of all things Adirondack - especially their spray paints.

Margaret - it takes ages to catch up, doesn’t it? I do love all the blogs but have to ration myself or no work would be done. Here is a bit of Clive’s art. He has never done much with charcoal before and he loves it. Jane Wild, who is such a kind and encouraging person, has given him a ‘charcoal rag’, which is a soft cloth, thoroughly immersed in dense charcoal and you smudge it on the paper. She also gave him lots of papers to try, and now I hardly see him. I am cross because I had a lovely pic of one of Jane’s water colours but I accidentally left the camera flashcard in the computer and, when it booted up, it wiped the card. Anyone else had that problem? 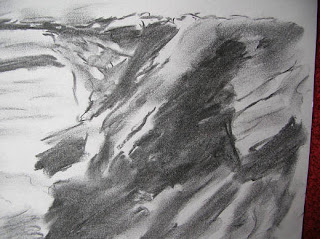 Talking of rags and smudges leads me into my next piece of news. I am having a baby - well a baby cat. Bet that got you worried! My daughter breeds rag doll cats and she has always wanted me to have one but Clive was of the opinion that Stevens was more than enough cat for one household. Now Claire is giving up the cat breeding and big boy Hugo, her stud cat, is going to have the operation. So, Fiona and I are having the last two kitties. Hers is a seal point girl and Sophie has named her Cupcake. Mine is a grey and cream boy and he is so beautiful. He looks just like a pale charcoal smudge so that seems to be a good name for him. I wanted to call him Raggy Omar (in the Stevens tradition, but was outvoted). He has left his mum briefly, to meet Cat Stevens who gave his ears a good wash, so that seems hopeful. He will visit again soon but won’t move in until early next month as Claire likes to keep them with their mum until they are ten weeks old.
This brings me to the aforementioned cat, known as Stevens. As some of you will no doubt remember she has had many visits to the vet which left her with her dignity in tatters and the vet’s hands in much the same way. In spite of all the expensive investigations (do get pet insurance, folks, it is so worth it) she was getting worse - very poorly - and I was so sad because I thought we were going to lose her. She was being sick all the time.
However I think we may have had a breakthrough, thanks to Carol Coleman (does lovely things with water soluble). She read on the blog about Steve and told me about a site where people were writing in about how dried food made their cats very ill and the stuff prescribed by some of the vets was worst of all. So I have been feeding her home cooked chicken with just a little good quality wet cat food. We’ve also been giving her Aloe Vera and I think that is helping. It has been over three weeks since the last episode and she has put back a lot of weight and is running around the garden again. As you can see. 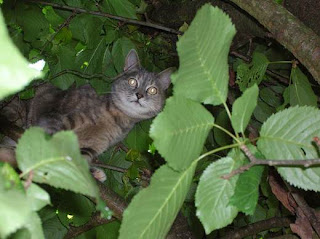 Thanks so much Carol - and all through this blog.
I am machine embroidering like mad to translate that last design (the one with the words) into stitch. I plan to have a heavily machined border with a transfer technique for the lettering.
This is a variation of the rub-away techniques like Picture This. First I stitched the paper print to look like tatty bits of gold lettering. Then Translucent Liquid Sculpey was painted over the printout - just a thin film. 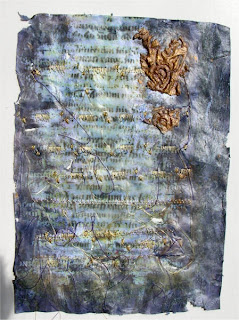 It was baked in an oven for 15 mins.
When cool enough to handle, the backing paper was removed by damping it and GENTLY rubbing away the paper.

Slightly shiny but very effective - I just added a little cast paper which I will gild with wax. Hope to show you the finished piece next time.
I’m off to sign several hundred books. See you soon.
Posted by Maggie Grey at 17:28

I love the new name for your baby, yes I did have a bit of a shock:)That charcoal rag sounds interesting. Can't wait to get your new book!

It's nice to be the first to get something - I have had to reorder the book 4 times already which tells you something.

Hi Maggie,
So glad Stevens is feeling a bit better. Isn't it amazing what you can get from blogging! Also can't wait to see pics of your new baby. its interesting to see your other half's artwork as well- I am suffering the tortures of going back to life drawing (I hate it) at the moment.
Just ordered the book for my birthday (just got to inform my other half he's bying it) Can't wait.

Love the book can't wait to get my copy. PS - You've been tagged. See my blog post for today. Playing is voluntary.

Forgot to say Congraulations to Clive on my last message.
Thanks for the label re swoopy pictures.
Just purchased V12 of PSP as I loved the 30 day trial and the interface is just great. Managed to buy it from Amazon for just under £40.
So looking forward to receiving your new book. I know I will be inspired with all your ideas.
Will send you a 'photo of my B-book but will zip it to your email address.
Love Cathy.

Please don't forget to sign my book too.... sulking 'cos Dale got the book before us! So looking forward to seeing it. in Answer to your question in a previous post... yes I still do quite a lot of computer design, and will put a little demo on the blog at the end of the weekend. Am off to investigate Amazon, thanks for the info Cathy, to look at PSP there.
Have fun with the kitten, and love the charcoal work Clive. Very free and expressive.
Best Wishes
Maggie (aka ToM- the other Maggie)

So much good news from you! Clive's drawing is lovely. I wish I'd had one of those charcoal rags when I was doing charcoal drawings in college. Wonderful news about Cat Stevens feeling better as well as her approval of the new baby.

I'm not getting your new book until September sometime according to Amazon. :( I have an outrageous number of books on pre-order, so I hope they don't all come at once. My hope is that I'll find your's for sale in person somewhere before Amazon gets around to it and I can cancel them.
Marilyn

Still havent finished the book but there are lots of things to try. I have actually managed to do a few very basic things with picasa, like a collage and working out all the colors I can do with it so I am stepping out. I think Adobe is puting out a new free something later in the year that sounds interesting.
the new kitten sounds lovely and I am glad Cat Stevens is improving.