Ups and Downs (or possibly Downs and Ups)

Back again - seems a long time and I've missed you all.

Thanks for the book comments, maybird and pascale et al. I've had some lovely emails about the book, too. I don't ever remember a book having such a reception before but I wasn't into blogging when the last Batsford book launched.

I made the pasta, Artisue and it was lovely. Now firmly on the family favourites list.


Chrissie - is there a great feeling of relief in your house now the dreaded exams are done? Out with the wine
.

Cathy - Ta! I promise to do a tute on cloning script later in the week.


Shirley - they will probably use all your words but the downside then is that the pics will have to be smaller. It's all a trade off - I hate books that are too thin with not enough text, but we also need to see the textile clearly. My tip would be to arrange your manuscript in a file and visualise it as double page spreads, putting the 'roughs' of pics in the file in the place where they should go. Bear in mind that it is annoying to have to page forward or back to find the pic that relates to the text. I always do this and hand the file to the publisher so that the designer can see what to do.


Sue - it was so lovely having you on the course. You are such good company. Hope you weren't too tired. I did take a photo of Sue but she was pulling a face so I won't embarrass her.


I was having a 'down' day for various reasons but Jackie's comment on the book has cheered me up no end. Thank you.

I think most of my down day was just tiredness after the weekend course. I am usually a cheerful soul and not used to feeling blue. Much better now, and I've just had a most wonderful idea which I will tell you next week. I shall have to keep it a secret from Clive for now, as new ideas are not allowed for another six months. It is true that my good ideas always involve poor Clive in a lot of work. Watch this space.


The course was fun but, as usual, I tried to pack a four day workshop into two days. So not much in the way of finished pieces but loads of treasures placed on their backgrounds and well on their way.

Here's a good bit of zapped felt from Sue H. 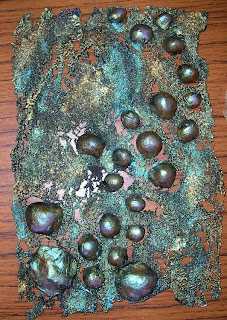 And Juliet turned out to be ace at ironing Tyvek. 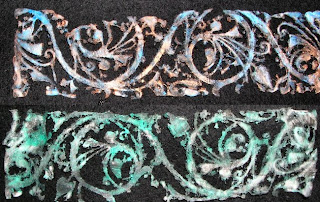 I'm sorry but I can't remember who owned this lot of lovely layers. Possibly Jenny. 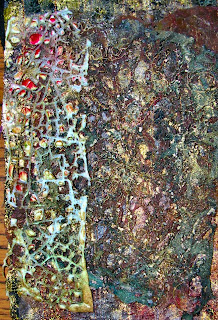 More felt from Jackie - evidence of some stitching here. 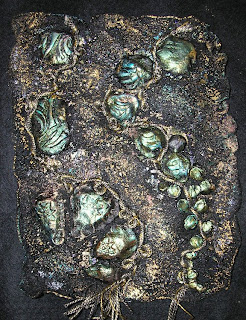 I'm fairly sure that this embryonic book cover is from Halina. 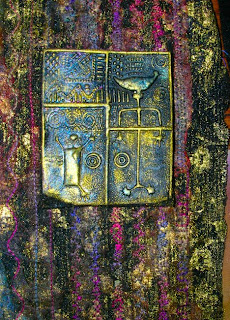 Talk to you all soon.

Very glad you enjoyed the recipe. My entire family likes it including the picky second child. Loved looking at all the lovely stuff in this blog post. Hope you're over your down in the dumps-ness, whatever it was due to.

Many thanks for the advice Maggie. I hand the manuscript over soon.

Thank you so much for a wonderful two days, Maggie, I really enjoyed myself and the brilliant company! I'm not surprised you were exhausted afterwards, you put so much energy into your teaching. Wish I could have time learning with you more often. And I was pulling the face on purpose, so would have been OK with having it posted! Yes, I was exhausted after I got home and couldn't really collapse into a heap on Sunday due to the dreaded Fathers' Day, but spent most of yesterday in bed with my laptop, ordering supplies, and I think I'm feeling a bit more energetic today, though still very quiet... Thank you again, it was brilliantly stimulating and informative.

Hmmm this looks like a fun course too, maybe you should emigrate and share with us over here. The results are gorgeous, great colours.

Oh Aussie Jo, you can't have her. We want her here in the States! I'm so envious of those who got to take a workshop from you in person, Maggie. What fun that would be! Thank you for all the wonderful eye-candy once again.