Thanks for all the comments. I am managing to blog more often, in spite of getting both WoW and Quiltwow (March issue) ready for proofing. The articles are all especially good this time for both mags. I gleaned two new authors from the Knitting and Stitching show: Jackie Langfeld and Nita Bruce, who has been a mate for ages and is doing amazing things with knitted wire and rust. This fits in so well with Anna Nowicki's article on rusting fabrics. I always try to plan so that a balance is achieved but the articles don't always arrive when you think they will.

If you saw Jackie's amazing armoured figures at the show, you won't have forgotten them. Here's a back view. 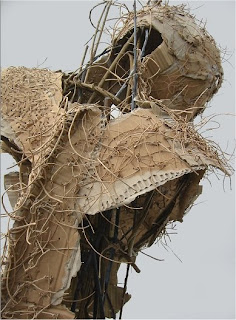 For the article, she is working on smaller but equally delicious pieces, using mostly cardboard and string. This is a detail. 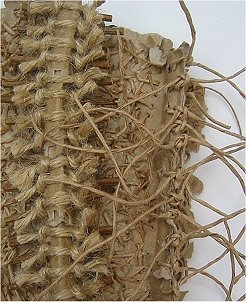 She started me thinking about using one of her techniques in a different way and I've had such an exciting time with it. Will show you more when I get a clearer picture. Isn't it great when we all inspire each other?
Thanks for all the good wishes about the cold. It still comes and goes, but was only really horrid for a couple of days. Now, of course, I have the cough.
Sandra - hope your cold is better.
Darlene - thank you so much for the blog award. I'm very flattered as I just sit here and witter on. Now that Annabelle is a Buddha instead of a Witterer, I may have to take over her old title.
Penny - we have seen your predicament on TV over here. Terrible heat , awful fires. Just hang cool and wait it out. We are freezing here with snow forecast for tonight but that is easier in many ways.
Jude - love the smoking jacket idea for Smudge. He'd love it as he is a cat with attitude. Perhaps that should be Cattitude. Here is the photo of his vampire teeth that I forgot to put up. 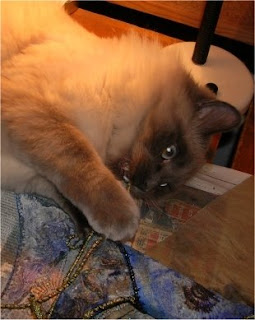 I had a bit of a workroom clear up and found these tags. They show the effects of texture gels with various paints. On the back is noted the effect and the colours used. Neat idea - I must make more. 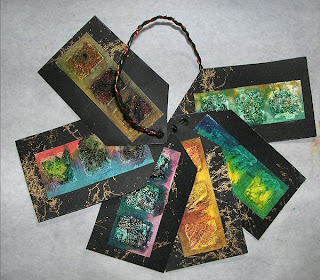 I also found the same idea that shows edgings. I think I did it for Val for a book, but I can't rememeber if it was used. It's a great aide-memoire.

I have to end with a cat thing. My friend Elli has a new female kitten. She also has two big boy cats and when I asked her what the new one was called she said 'I've called her Boudicca because she came rushing in, put on her woad and her breastplate and terrified the inhabitants'. She has a lovely turn of phrase.
Posted by Maggie Grey at 14:45

Looking forward to the Jackie Langfield article - I loved her sculptures!

Well done for bagging Jackie for an article. At Harrogate, I kept having to go back to look at her sculptures, they were amazing.

How on earth does Jackie manage to make cardboard and string look so striking? Her work is amazing. Love Smudge's vampire teeth and the gleam in his eyes. The tags are lovely and so decorative in their own right, as well as being a brilliant way to record information.

Looking forward to the next WoW.Eventhough I am still trying to find time to do the workshops in the December issue. I did a cover for my calender, it turned out quite nice.

Waiting for the next WOW with anticipation. Love the name Boudicca!

Your friend seems to have a way with words. It would take me forever to think that up and then I'd have no occassion to use it! Is that a tower book with which Smudge is playing? At least my dogs take my things outside in the yard to destroy them. They don't torture me by making me watch!

It's lovely to have found you Maggie - I worked with Kate on the Leeds Tapestry and remember you from those days! Where can I find Anna's article on rusting fabrics please? - a lovely posting thank you

What a wonderful piece of work by Jackie. Pity you missed your workshop and got the plumber instead!