Thanks so much for the encouraging messages about the new site (and about WoW). It's a bit of a problem putting the dates of talks up, Wendy. As Clive comes with me (we have a video projector and I like to pretend total ignorance about it) it would rather advertise the fact that no one is at home. So I only really announce the things I do on my own, like Jersey.

Glad you had a good potter about, Annabelle. Olga is amazing, isn't she and I love her work. She was kind enough to let me use two pics of hers in my Image to Stitch book, out in June (plug, plug).

I had a lovely day with Fimbria in Fareham yesterday. we were very experimental and they did some lovely things. Today, I've been packing for Jersey and the exhibition work is all but finished . Here is a close up of one of the pieces, Earth Series, Triffid Seeds. This was a piece that I started at the Birmingham K&S show and finished at Ally Pally. It got longer and longer and wrapped itself around people's legs. Clive called it Quatermass but he's older than me and I don't remember that, so I called it the Triffid. Lots of organza embellished with other fabrics. The seeds are made from Model Soft (papery stuff like Hearty). 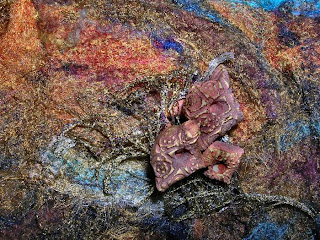 It was great fun to do but I had to cut it in half as it really was much too long. Not brilliant photos as scrunchy organza and flash photos don't really work. 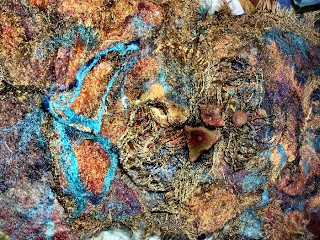 Georgeous, i love embellishig organza the colours and textures are amazing, Good luck in Jersey

I remember seeing pictures of this when you were making it, and your comment that it was wrapping itself around peoples' legs. It's really lovely. I must find some of that stuff you made the seeds from. Have fun in Jersey.

Looking forward to seeing you at the workshop in Jersey next Thursday,

What gorgeous colours and textures - I too love embellishing organza, but I am very much a novice with it.

I haven't visited your blog in a long time, and reading it now makes me wish I had been back sooner. I have only just started blogging, and I love the way you chat to people in your blog. I still have a lot to learn. http://rarelizzie.wordpress.com
Good luck in Jersey.
Liz Welch