Thanks so much for all the great comments on anti virus stuff - looks like we shall be using AVG very soon. Lots of people emailed me and suggested this as a good solution. In spite of the hopeful message from Amanda, all that has happened so far is a very polite message from Norton's support service suggesting we enter the renewal code. What the heck do they think we spent all morning doing?
Arlee, I think the Dr Seuss poem is an excellent idea - something along the lines of the Tweetle Beetle Battle, I think.
Carol - no Fibredancing review in this issue (September/October) but there may be another out now. Do you have an American distributor? They are usually good at getting books in the 'over the pond' mags.
Having spent a great day yesterday finishing an article for WoW (which got so interesting that it had to be split in two), I am planning to do a piece on the cave paintings. In preparation I thought I might make a cave book to explore techniques and designs. I think it might be quite big and very messy - I like fat books with stuff oozing out of them.
I have some ideas that I want to play with - one of them being to extend the method used for this textile. It is also based on wall paintings, of Buddhas, and I like the way the cast paper is 'growing' out from the wall. I love using water soluble paper like this, so often the cast pieces just look plonked on. Fine at times, when you need a focal point, but I like to integrate. 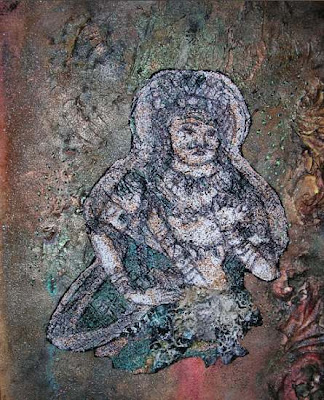 The base was paper bonded to Vilene with gesso and various texture mediums added and painted. The paper was then applied and the edges wetted to squash them into the background. 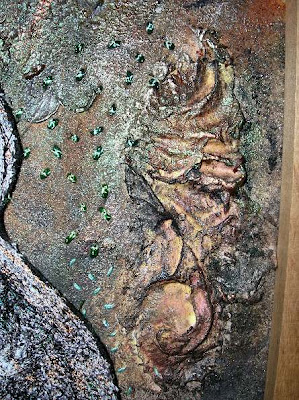 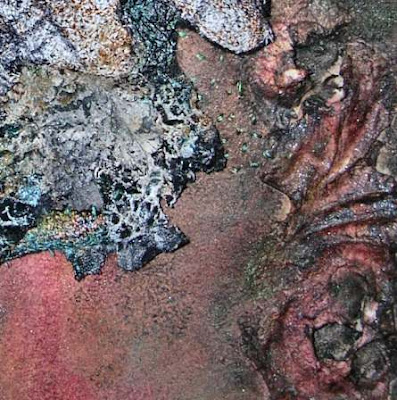 Today I am off to Bournemouth again. As this is with my two girls, it will be SERIOUS shopping - not the dilettante version with Clive. Christmas has been mentioned and Boots are giving double points, so off we go. Might just pop into Starbucks, though. With three of us it could be a good haul!
Posted by Maggie Grey at 08:10

I can just see the three of you emerging triumphant from Starbucks with shopping bags crammed with tissue paper! Have fun shopping.

Maggie, I just found your blog - now I'm off to make a cuppa so I can read at leisure. I love your work and I'm finding your blog to be pure inspiration. Thanks!

Firstly - have to say I love you blog and your writing style - you come across as a very friendly person - one who would be a great friend!

Now - I have had the same problem with Norton's that you have. Here's what worked for me. You have to turn off Nortons - disable it completely while you run the renewal process because it blocks itself from installing. How dumb is that? You'd think it would recognise itself wouldn't you?

Megan (in Sydney Australia where it's just started raining).

Maggie our computer wizz also suggested AVG and it works with no complaints from the expert in the house, we had Norton but it was too much of a hassle.
Love what you are doing with the paper casting, i must get time to do some more and play more with it.