Shrines, Shines and the Keeping of Teeth

Well, the video seems to have sorted itself out. Someone emailed me to say that Google video (where the blog videos are held) was down for a while yesterday, so I expect that was the cause. When the blog is uploaded I don't think the platform (mac or pc) used to view it makes much difference.
I'm sorry not to be going to Harrogate, Kate. I'm teaching for the next few days so won't be blogging until Sunday. The sad thing is that Jane Lemon is not very well, so she won't be going either. Ruby Lever has been wonderful and I can't think of anyone better to set the exhibition up. She will have Val's girls, too, so make sure you say 'Hi'. Val's daughter, Sarah, was so taken with the Embellisher that I have talked Janome into lending them one for the show. Hope that they take photos.
Sharon: Molding mats are unmounted rubber stamps, made by Colorsnap (www.colorsnap.com). In the UK they are sold by Art Van Go or Rainbow Silks. Dale has them in Oz. They are not too expensive and come in lots of designs. Moonshadow Mists are walnut ink mixed with a lovely bit of glitz. If you Google Moonshadow Mists you'll find lots of stuff on them.
The blue metallic paint was Metallica by Jacquard, Wendy. I did add a little blue Pearlex-like stuff called Primary Elements. They come as a powder in little pots and you can see them, below. 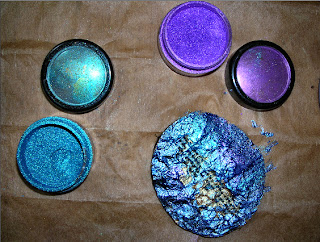 Doreen - do try with mesh or water soluble paper. It makes it so much easier to integrate with a base fabric. This is my favourite piece made with this technique. I used a feathery molding mat with lots of WS paper, painted while wet. The background fabric is embellished organza on felt and there is a silk pod stitched across to make a divider. 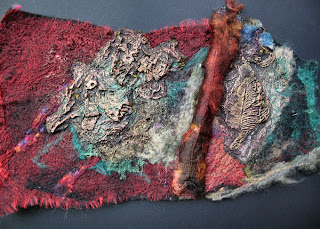 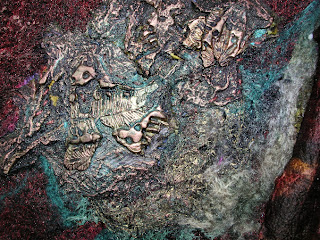 Hi to Carole in BC. I love Canada and so want to go back again. The trouble with my life is that there are no longish chunks of time to travel. Glad you like the Stitch, Dissolve and Distort book. I feel so sad that there won't be another book with Val. Yesterday Batsford sent me two choices of cover for my Image to Stitch book and I so wanted to ask Val what she thought. I have to say that they were both great covers - hence my dilemma.
I am starting my next set of 'outings' with a talk on Celtic Inspiration at Basingstoke. I do enjoy giving talks. Clive does the history part of this one and, as part of the research he got very into shrines. These were, as I'm sure you know, used to hold sacred relics or books. One of the shapes was a house shrine like this one. Based on the churches which were very simple house shapes. 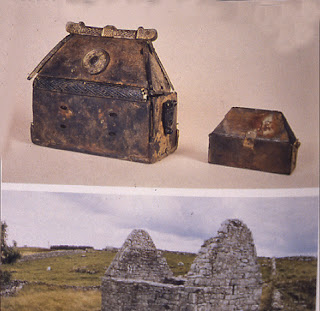 Clive made this shrine - he even did the stitching on a machine called a Poem which linked to a computer. The software was so horrendous that Clive (who used to be involved in computers before he accepted the job as my minder) was the only one who could make it work. 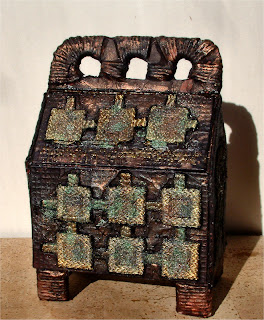 The technique is one that I used in my Raising the Surface book and involves pasting tissue over plastic canvas. He inked it and then we waxed it with metallic wax. He did a good job, didn't he? If I have to have my tooth out perhaps he'll make it a tooth shrine. Yes, they did have those!

Yesterday's dental happiness was short lived. When the dentist filled the tooth he said it might not last, but that we should see how it went. In the event it went very quickly so I'm off to the dentist again this morning.
We had a power cut yesterday evening so I didn't get my Celtic stitching done. You'll have to see that next week.

I like Clive's stitching! I love it when our men really get involved in what drives us. That UTEE and mesh/water soluble paper technique is really interesting - the detail pic is fabulous. I always worry about using stamps and moulds and things, but there IS room to be creative with them. Just needed you to show us! Hope the talks and stuff go well - we'll be missing you!

Maggie I will try the mesh etc as I still haven;t attached the others that I did to anything for the very reason that you mentioned.
I'll miss you while you are away as I enjoy your blog so much.
Not many sleeps now till the Dec. WOW comes out.

I'll miss you at Harrogate tomorrow but I'm pleased to hear Val's exhibition will be there. I'll say Hi if I get the chance. Hope the teaching goes well and thank you for the tutorials. It's always good to see things in action and not just words. :)

Clive did a great job on the shrine. It's beautiful. I've tried to interest my DH in what I'm doing but he's only willing to complement me but not get too involved!

Have tried the video now and it works really well, thanks. I can see a big spend coming - rubber mats, moonshadow inks, embossing paint.... Just need a good spell at home to have a decent play! Good job I'll be at Harrogate for the weekend.
Clive's done a great job with the casket. My DH is totally uninterested in anything arty or stitchy.

Maggie: Thanks for all your tips on where to find the products you have used. I have been wondering about moulding mats since you mentioned them in your book. By the way, just to save others from searching too much, I found the moulds at Rainbow as you suggested but they are made by clearsnap rather than colorsnap. When you try the colorsnap site, it just has links to ebay etc. Now, hopefully, I can find them in Canada. I have bought an Embellisher by Janome and a yet unwrapped melting pot. Spent today experimenting with the embellisher but still lots to learn. Will miss your blogs...it doesn't take long to get addicted to this site. Carole

I love the idea of shrines - I once made an amulet hanging for lost earrings ( I aways seem to lose my favorites) but a shrine to house the solitary ones left might be more effective!

I love the idea of shrines - I once made an amulet hanging for lost earrings ( I aways seem to lose my favorites) but a shrine to house the solitary ones left might be more effective!

Hi Maggie
The shrines look wonderful, I wish I'd picked up this post sooner as I live quite near Basingstoke and would have loved to hear the talk.
Your DH is a wonder.
Many thanks for the info, it's duely recorded with all the other little gems we get on the web, I can't believe how much info is out there and the generosity of the people who to share it!