Home again from the Knitting and Stitching Show. Lovely to be back and it all went off very well. Clive decided that he could load most of his stuff on a laptop, so he did come with us and we were really glad that he did. We sat in a row, Jane, Clive and I, like three wise monkeys with the middle monkey glued to a computer and the end monkey attached to an embellisher machine. Jane was much more discreet and was getting on with some hand stitching. Here are two of the three. 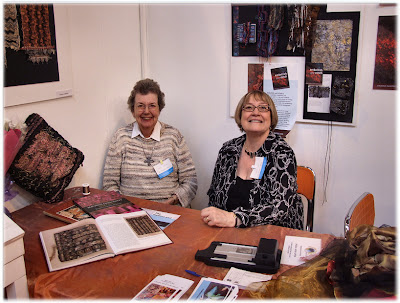 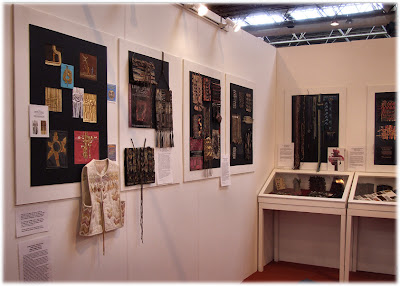 Jan and Sarah, who deal with all the staging at the show were wonderful to us. Jan had made some large white-painted boards for the A1 mountboards and this gave them a very effective 'framed' appearance. We also had all the books, scrolls and vessells in white cabinets, so we looked quite posh. The tassel tree that Eric Horniblow made was much admired and Val's tassel's looked fantastic. Pics can't really do them justice. These pics are not great as I took them from the 'big' hi-res camera. I'll do better tomorrow with the web camera. Just a taste for now. 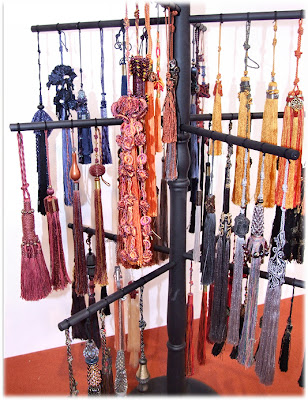 Carolyn Sinclair's wheelchair was very helpful in moving the big boards around the show. She said it was the first time she had been used as a wheelbarrow! Carolyn drove Jane up (my car was too full) and helped us set up. Thanks, Caro.
Everyone was so kind - they really appreciated the chance to see Val's work and wrote lovely things in the book, making Jane and I a little sniffy at times. 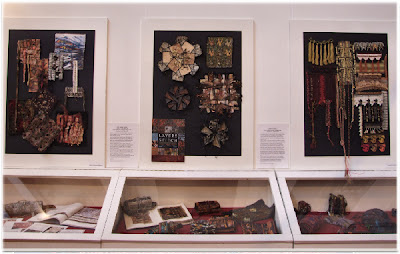 Everyone thought that theming the exhibition to Val's books was a great idea and lots of folk had tales to tell about how her ideas had got them started in embroidery. It also worked well in flowing the exhibits from the wall into the cabinets.. I think it is the last time her work will be seen all together, as it will be distributed among her family, who do appreciate it very much. Great to think it will all be loved by friends, children and grandchildren. 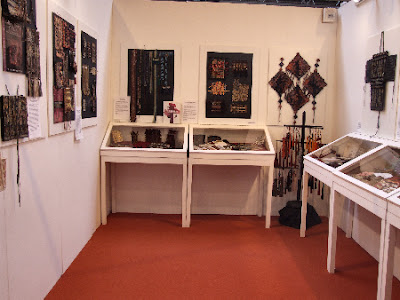 I met so many people who read and enjoy this silly blog. It seems such a self indulgence to ramble on about my obsessions, but I'm glad you all like it. The much maligned cat sends regards to all who wished to be remembered to her. She is glued to me like Velcro at the moment in case I disappear again.

I thought the show was good this year. Will put more pics up tomorrow when my brain is working again. I had fun with the embellisher, working mostly on organza with silk fibres applied from the back. I started a piece on Friday and it got longer and longer. I was aiming for the top of the staging but it became too unmanageable and kept attacking visitors and tripping them up. Clive called it Quatermass and thought it might take over the show (it wrapped itself around his laptop at one stage).

We developed a good game of stitch consequences with Margaret Beal. She gave me some interesting material to try - very fine synthetic fabric which worked a treat on the embellisher. I gave her a worked sample to show the effect.
This came back to me enhanced by Margaret's soldering iron - then Ruth Issett got involved. I'll show the pics tomorrow.


I'm off for a coffee break now, followed by the washing and shopping - back to the grindstone. More on the show tomorrow.
Posted by Maggie Grey at 11:00

Maggie--not to make you more sniffy, but I do hope you know how much Val and her work meant to so many people. I know that for myself, the collaborations that the two of you did for your books were incredibly inspiring and pushed my boundaries for art in a new joyful direction. I loved the pics from this show!

Hi Maggie
My aunt and I met you at the show yesterday and you inspired us so much with your demo of the embellisher that we made sure we ordered one each before we went home!
Yours and Vals work was so beautiful and it was a real pleasure to meet you. Thank you so much for answering all our questions.

The exhibition looks wonderful, I can't wait for Ally Pally, it will be there won't it?
I love the idea of "stitch consequences" will tuck that idea away for future reference, am looking forward to seeing the results.

This show seems to have been fun, even though you were sniffy from time to time.
I enjoy looking at your reports about your adventures, it is very inspiring.
A big hug to the cat :-)

Thanks for bringing us a flavour of the show, Maggie. Sounds like you had fun. I hope the Val exhibition will be at Harrogate too as I'm not sure I will get to Ally Pally. Don't work too hard on the chores! :o)

Glad you're back in good shape and I'm looking forward to seeing more pictures.

Maggie the exhibtion was wonderful - so inspiring to see Val's work for real. As you say pics cannot do the pieces justice. Many thanks for putting all of this together.