This is a Book Review

I have been trying to sort out the photos from the show today. I photographed the cabinets so that we know where it all goes for the next two shows. Jane's idea - what a good one.

Barbara - there is some of Val's Flower Stitcher stuff in the exhibition. She did such a lot with that foot that I took a Flower Stitcher in and put it in the case (you can just see it on the right). Will show a close up tomorrow. Dale has been doing a lot on this foot lately.
. 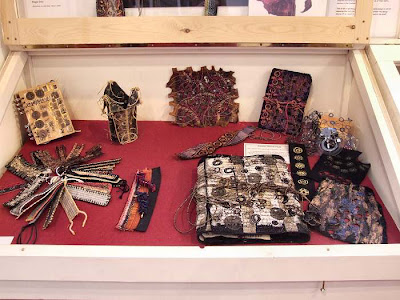 Lesley - better have a blast on the housework - they'll be no time after Friday. Which machine did you get? Here's a detail of my Quatermas piece made at the show. I am experimenting with things to apply to add a focus. 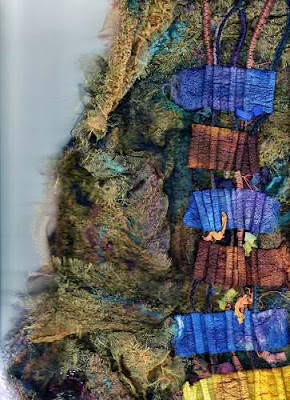 Quite like this piece of carrier rods with trapped wrappings. Val and I did it between us so it would be suitable. Will have to make some more though, so it won't happen soon.
Thanks for the kind words, Sue. I think it's great that we are all friends before we even meet. Everyone wanted to know the cat's name but she made me sign a confidentiality agreement before the show!
Chrissy says she gets in a mess with the embellisher. I do too - I am always surrounded by yarns, fibres and fabrics. Must be a feature of the machine as I am quite disciplined with a sewing machine.
Hope you make Harrogate, Margaret. I'm not doing that one as I am teaching. Jane is going up with Ruby Lever and meeting Val's daughters, Sarah and Louise, who are helping with the show.
Here are a last few pics of the show. I love Oliver Twist's stand and here is a lovely photo of Jean and Walter. The colours of the stand always make me want to photograph it as an inspiration.
. 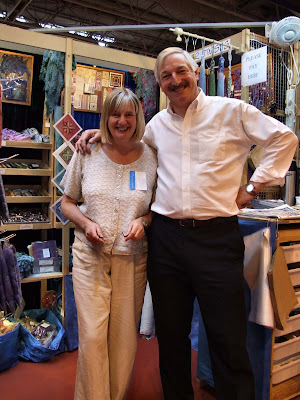 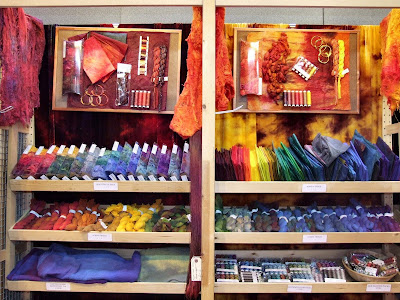 They had a piece of my work on the stand that Jean bought ages ago. I was still experimenting with metal at that stage. I have to fight the urge to take it down and change it. 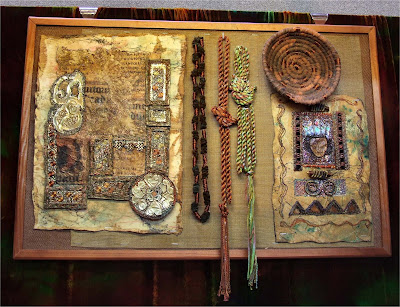 I have now become a secret blogger. I had announced that I had no time to blog today and Clive thinks that I am doing book reviews for Workshop on the Web. This is becoming an addiction. I shall soon be forming bloggers anonymous. At least the cat would approve of the anonymous bit.
Posted by Maggie Grey at 14:06

Lovely photos Maggie. Whoops forgot about housework - I've been making little bits with the needlefelting kit I picked up at the show!
I'm getting the Pfaff machine - completely free as my lovely Aunt bought us one each! It comes tomorrow and I still haven't done the ironing. Ho hum.

I'd love to see some flower stitcher work--i'm sure there are tons of applications and cool things to be done with it, as soon as one learns how not to fight the darned thing!

Can I join Blogger annonymous please - or perhaps Im not affected seriously enough yet! I am trying to keep up to date but you know what its like - I feel Im not doing anything as interesting as everyone else - but I have at least got some embellishing pieces up this morning.
Lesley - I have the Pfaff embellisher and love love it! Hope you have as much fun with yours.
Maggie - I hope its ok - I mention you and also put a link to your blog - tell me if Im out of order.