Sunday, sweet Sunday with nothing to do. I wish.

I hope you find the book, Leanne. It does seem to be on Amazon. Talking of books I've had a few emails commenting on how many great books there are about at the moment. We reviewed so many on Workshop on the Web and several of the really good ones were self published. Once upon a time these were the poor relation but, if they're done well, they can be better in many ways than the big publishers. I think the 'bulge' is due to the success of The Festival of Quilts. Everyone used to aim for Ally Pally in October but it's all moved forward now.
Hey, Shelagh - I can't believe we have still not met. We've been corresponding for so long. So sorry about your NEC visit. Glad you are keeping City & Guilds alive. There are so few centres now, due to the funding crisis. Are people going to want to come to tutors like me and set fire to their work if they haven't learned the proper way to do things!
We try not to work on Sunday but decided that the Val exhibition was love, not money, so yesterday we got all the boards and pieces out to see what we still had to do. Here is a corner of my sitting room - the rest of the room was just as packed. Plus all the cabinet material. Plenty to see. Still some labels to do but we're nearly there. Clive made the new boards - they involved cutting holes and took ages. I made him lay down in a darkened room to get over it. 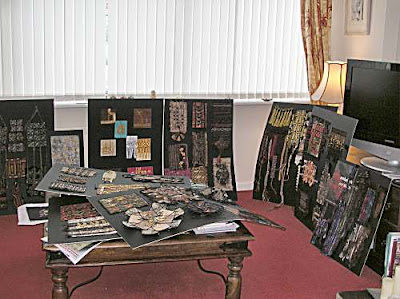 Later we were sitting out having a cuppa when this chap appeared, hovered over the pond and then formed an attachment to a pot of house leeks. Isn't he lovely? 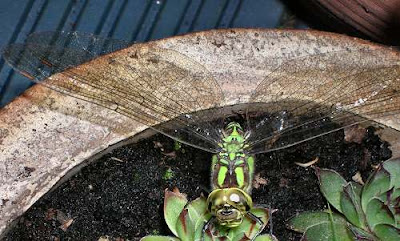 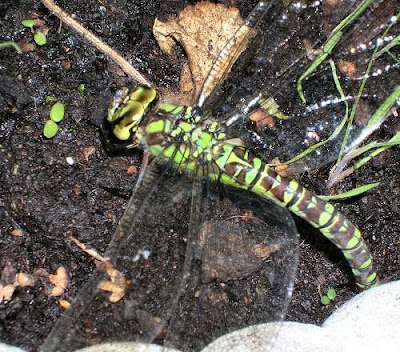 The Cat (of enema fame) came out to eat cobwebs - a nasty habit it has. It was then sick. Other cats eat grass - why do I always get the nutty ones? This time it was sick half-way through the cat-flap. ON THE WAY IN! 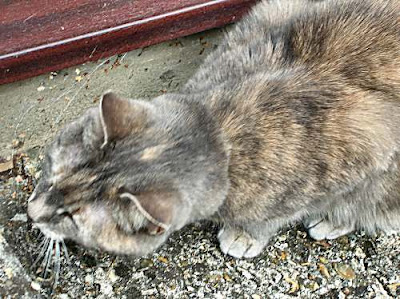 I am off to Beyond Stitch today. This is a group that formed from two groups I used to teach. When they were doing better work than me I decided to stop teaching them! So we all meet once a month - supposedly to work, but mostly to chat. Today I plan to do some more work to prepare for my two day embellisher course which starts tomorrow.
Posted by Maggie Grey at 08:20

Oh Maggie --fancy having all that wonderful VCH stuff in your house at one time-how special is that.
Doreen

The boards are looking fantastic..well done, all of you.
I am really looking forward to seeing them at the Birmingham Knit and Stitch in a couple of weeks. My credit card has only just got over the FOQ last month! Have a great time at Beyond Stitch. Love to the cat and Clive.
Best wishes
Maggie ( the other one)

Hi Maggie
Am looking forwards to seeing the Val exhibition - probably at Ally Pally as I dont think I will be able to get to the NEC. I have so many of her - and your - books it will be great to see the work in person.
Spurred on by signing up to a C&G course and enjoying your blog - I have also started a Blog to document my new adventure and moving away from making bears and dolls. Exciting!
www.teddystyle-janet.blogspot.com

Maggie, Just popped by to say the Sept issue of WOW is the best yet and I've subsribed since the beginning. Some fabulous articles. Looking forward to seeing the Val exhibition at the K & S show.

my cat's a bit nutty too, lol...or vindictive. my apartment is nothing but hardwood floor with a couple of small rugs and it never fails, every time he needs to cough something up, he finds the rug! why?! you couldn't find one of the many areas on the hardwood floor where it's easy to clean up? cats are strange.

If you'd like to trade your cat in on a new model, I have three 3-month old male red tabby kittens I'd ship you priority mail. Hey, transatlantic cat swapping--we may have an idea there! All your stuff looks gorgeous, Maggie. Have fun.

Hi Maggie, the VCH boards look fabulous, what a pity I will not be able to come and see the show.
I'm now back in Kuwait, and just about recovered and back to normal,(although DH may have a different point of view!). It was lovely to see you at the IFQ, glad I could be of help, and I forgive you the lift. And making me walk up the long way too! Busy now getting things up and running for the KTAA programme. Our first meeting is on 25th Sept, so we are well into it all. don't worry about the mad cat, ours used to eat the spiders, with all sorts of horrible crunching! and with that thought, I'll go.....