It's Short but it Worked

Ohm - I was only using the pack for scanning purposes as it had such great colours. I then used a drawing of an ammonite to displace the image and printed the result on silk fabric. This was used on the embellisher in yesterday's photo. I did do an article in WoW on using the Oliver Twist experimental pack so I will look the resulting embroidery out for you on tomorrow's blog. Had a smile about the mac, and yes, you are so lucky not to have the virus problem. I don't think it would have helped with the movie as it uploaded OK so it was at the Google end of the process that it went pear shaped.

I agree about the sulk and the walk. Not good for walking here today as we have had torrential rain, thunder and hail, so far - and the day is only half over!

My April plans for Oz have been moved to September - partly because the son may be coming here for Christmas and partly due to work pressures. The book may be at critical mass then, depending on how fast they progress.

The movie has worked. It's a much smaller movie as I think I was too ambitious before in both running length and resolution. It's the same theme - applying silk ribbons - and nothing particularly new. Now I know how to do it and how long it takes I can do something more exciting.
I was trying to make an embellished piece without using silk or wool fibres. So we have abaca tissue and a variety of yarns on a velvet with some silver foil Bondawebbed on. Then the ribbons and a piece of computer printed silk. On a Celtic theme as I am doing a Celtic talk this week. Here is my design. I only used the middle bit. It gets very distorted by the embellisher and winds up like this. 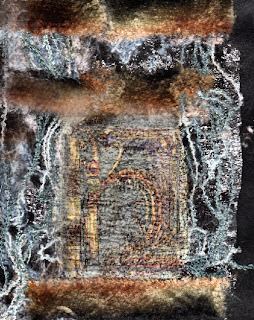 I need to do lots more to it, but this is a start. So many people think that you can only use an embellisher with fibres.
And now for the mini movie.

Spielberg eat your heart out!!!!
Congratulation Maggie on your technical achievement:-)

Wait till you see the one we've got planned for tomorrow!

Your blog just keeps getting better. I recently purchased an Embellisher and am having great fun experimenting.

Hi Maggie
Great movie, I want one LOL.
I think I need to get a book on the embellisher, there seems to be so much more if it can do than I realised. I like the idea of using it on computer imagery, it looks great!
What method did you use for printing the image?

Impressive, can't wait to see the next one.