Thanks to everyone who confirmed my theory that it is not possible to be creative without also being messy and untidy. I note that no-one congratulated me on my ultra tidy office desk. It won't be like that for long.

Megan, I remember the dead cat book. It had some very creative ideas and, when I'm fighting to get some medication into Stevens, some of them are quite appealing!
Arlee - I think I'll pass on the suppositories. The stuff that advertises itself as 'Spot-on-cat' is bad enough. In our case it is spot-on-kitchen floor, cat-up-next-door's-tree'.
Hey Julie - haven't heard from Jo for ages. Get in there and play!

Yesterday we had a day off - a momentous event lately. We went to Westonbirt Arboratum, near Bath, and it was just wonderful. The tree colours were fantastic. 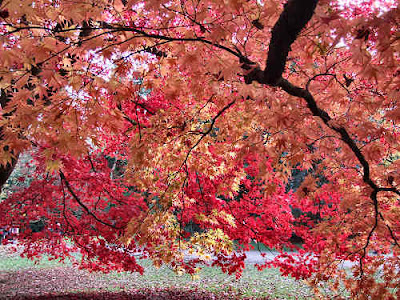 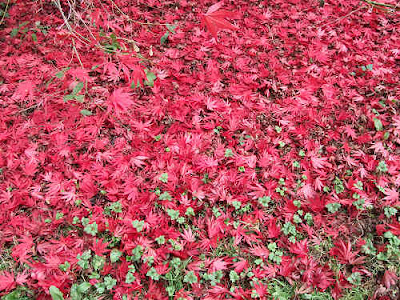 I just love this carpet of leaves with undergrowth growing through. We were in a very silly 'let out of school' mood and we giggled a lot, particularly when I was in poetic mood and was describing the effect of the sun slanting through the foliage at great length. Unfortunately Clive was no longer standing next to me as he had crept off with his camcorder, so I was waxing lyrical to a large group of people, all giving me funny looks. I tried to carry it off by looking as though I was the poet in residence but I'm not sure it worked. 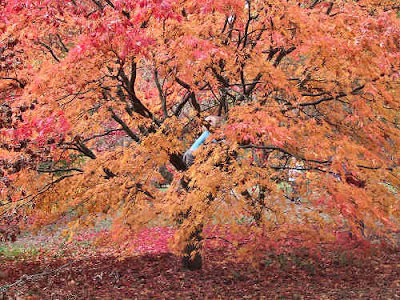 I love the effect of the child's blue jumper in this tree.
We did a lot of walking and decided to have a proper restaurant lunch but were defeated by the queue. So, off to the 'barbeque' which had no one waiting. Two papier mache burgers later we found out why. No matter, we were refuelled and were soon walking again. 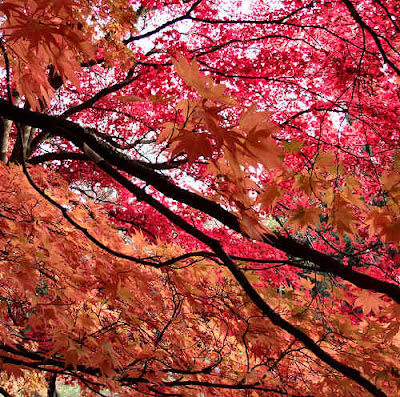 This pic was taken under the tree, up close and personal, as instructred by Val. Trees are a great subject for a computer design and the one below was developed from the top pic. Coloured edges and Rotating mirrors were used here. I was trying to get away from displacement maps. I like the fringe-like effect at the bottom. 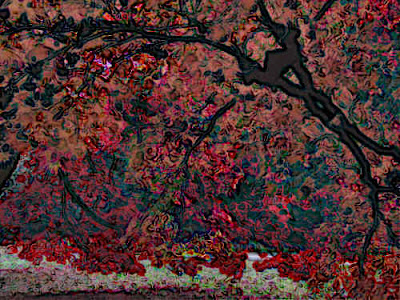 However Displacement Maps are not so easily cast aside and I produced these two studies below from a photo of a bright tree in front of a bank of evergreens. It's given me a great idea for some stitching so I'm going away to do some pastel drawing with a view to a couple of pieces of machine embroidery. Just love the way the pale sky area has given the contrast it needed. 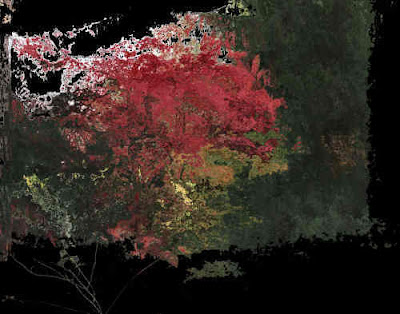 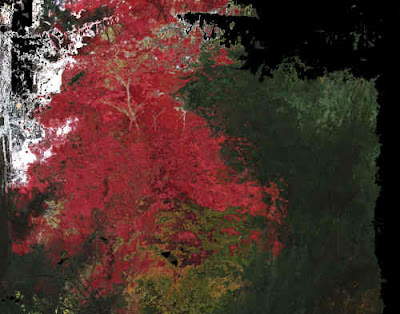 Hi Maggie! You can't possibly create and stay clean at the same time!! But, I do have to clean up before I start another project though!!!! Love the colours of the trees - such a beautiful pink. Also wanted to say thanks for my Paint Shop Pro CD - and now you've inspired me to get it out and play.

The photos of the trees are beautiful! I just love fall.

Beautiful tree pictures Maggie, thanks for sharing. Lots of inspiration there!!

The trees are beautiful. I just can't get away from displacement maps either and it's all your fault!

Hi Maggie, I live about five miles from the Arboretum but have not ben able to visit physically for many years as I am virtually bedbound with severe M.E. At this time of year I usually daydream walking there and how it is but your wonderful pics have given me more to daydream about.brilliant .Thank you. I would have been waxing lyrical to anyone who would listen.
I have not posted before but am really enjoying the pics you post on your website . Good addition to WOW. Much love from Vonne Evans.

Thank you for such beautiful, beautiful tree pictures. The colours and textures are gorgeous!

I just hopped over here from Julie's blog- she has a link on her site to you. These are BEAUTIFUL!

It seemed to me too, that we creative people especially live with the impressions of nature! Now with the autumnally weather, trees, leaves ...

Fantastic tree pictures Maggie... so inspiring. Love what you did with the curled up leaves too.