Of Boys, Bears and Birthdays

It's been a few days - got a bit carried away doing some stuff for the book. Just five more pieces of work to finish. Hazel Credland told me about the rub-off decals from Crafty Computer Papers http://www.craftycomputerpaper.co.uk/ which I had rejected because they sounded boring. They are not - they are huge fun. A fiddle to put together (and very sticky) but a great effect. I've put them on gold kid and made a frame for one of my icons. Thanks Hazel.
I have to get the text bit off at the end of this week and I am not helping myself as I keep changing my mind about the order.
Today is Clive's birthday (been out for lunch so this may not be the most sensible blog I've ever done). One of his presents, which he was given yesterday, was the Dangerous Book for Boys. As we happened to have a few boys in the house they tried out the paper hat instructions. You wouldn't think, with all their sophisticated computer games that they'd like these but the idea went down a treat - see below.
. 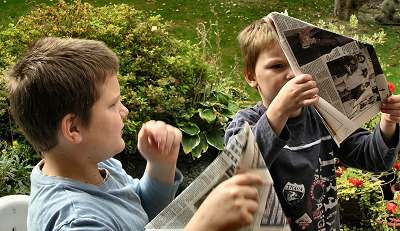 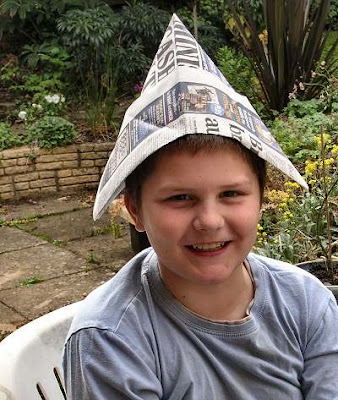 Well, mine's all right - don't think much of yours!.

Back to the serious stuff. Loved all the posts about pestiferous cats. Sure you are right, Julie - mine would certainly come back. Arti - your bead accident sounds a right pain. I once had a major bead spillage and sucked them up with the hoover hose - having pulled some tights firmly around it. It worked. You still have to sort them all out but at least you can do it sitting down.

I had a little giggle about your taped up camera, Penny, as we have a camcorder just like that. Clive was very proud of these battle scars as it was dropped while he was filming a bear on Vancouver Island. Today however, he has a new one that I bought him for his birthday. We use little movie clips in our talks - one of the joys of a digital projector - so we will be shooting some new ones soon. One of my most embarrassing moments came when he filmed over my shoulder when I was using the embellisher machine. I had a low cut top on and the camera seemed to keep panning back to my cleavage. Foolishly, I believed him when he said the film was fine so there was great hilarity at the next Guild talk!

I went to the Wessex Textiles Exhibition at Upton House in Poole and it is very good. I don't have anything in it this time - too much work at the moment but we have two new members who are very good. Lynne Prosser's Three Fools on a Hill, below, is wonderfully textural. 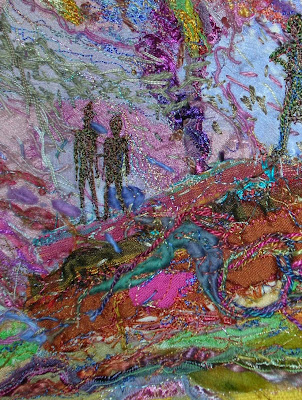 Carla Mine's big hanging looks great in this setting. It is a very good gallery. I'll be there on Friday and Saturday, hopefully with a sewing machine, finishing more book pieces. 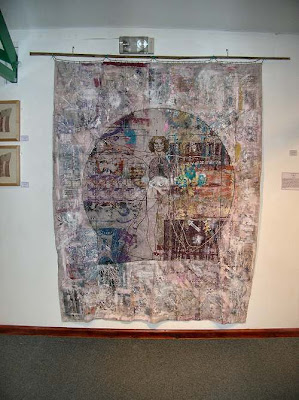 Since I have three boys of my own I'll have to check out the Dangerous Book for Boys. Sounds like fun and a bit of mischief.

Have a look at my blog. I've posted some new PMC jewelry.

Thanks Maggie for showing Lynne Prosser's piece. It is beautiful both for its colour and texture. Looks like she uses a lot of hand stitiching.

Happy Birthday Clive.... belated...sorry. Thought we might have a photo of Clive wearing his origami. Lynne is a talented lady... I love the way she will cut into pieces of work if they are not working. Such confidence.
Best wishes
Maggie
(the other one)