Where has this week gone? Haven't even had time to blog.

Jackie - it's very good to meet you. Any relation of Ian and Ruby's is a friend of mine. If it hadn't been for those two, we'd have had great difficulty getting the Val exhibition up to Harrogate. Good to hear that the World of Embroidery mag got you moving. I bet Ruby had a hand in it, too.

Judith - I expect you got caught up in the Fiona telephone kerfuffle - you should have the password by now , I'm sure. Any problems, I'm on maggie@workshopontheweb.com. Must get around to putting that on the blog.

It turned out that Fiona's neighbours had been having trouble with phones earlier in the week, so we think that was why a 'set' of password messages didn't get through. It was while BT were sorting out the earlier problem that they caused the later one!

Actually I am back in love with technology again as the new car has a ipod connection and it worked straightaway. Sounds really good, too. No more taking all those CDs on long trips - just one tiny device with my entire collection, quite amazing, really.

Interesting feedback about software driven embroidery. I do use it quite a lot and have the digitising programs for several machines. Yes, Carole, you can just set it up and it stitches by itself. Best to keep an eye on it in case it has a hissy fit but, in theory, you can go off and leave it.

I did like your husband's comment, Penny. My son is a hydro-geologist in Sydney, so he is very involved in the drought situation. It has to be said that his solution seems to involve him spending a lot of time surveying surfing beaches. However, joking apart, it's a nasty state of affairs and Ian has been writing warning articles for years to try to get someone to take it seriously. Now they are.

Swap you a machine for a pony any day, Penny. I used to own half a horse and would borrow another (very quiet) one and take my daughter out for day rides when she was about four. We'd tie our sandwiches to the D-rings behind the saddle and just take off. Now I'm too scared of breaking a limb to even get on a horse. Do you ride yours?

Back to the embroidery machines, I almost always stitch on felt and cut out the motifs to re-apply them. In its native state, the stitching can be very flat and most of the work I've done on the machines has been in the form of experiments to raise the surface (I keep having to use that phrase, must be a subliminal message to sell the book). The design below used the drop shadow effect in a paint program to mimic raised, cut-out Celtic motifs. 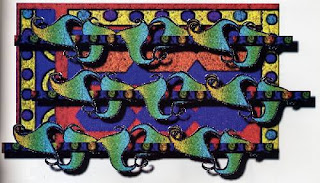 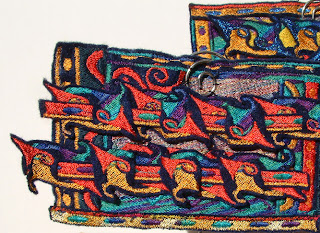 The piece is a collection of three flag shapes and is called 'Fly the Flags for HRT'. I felt so great on HRT that all my work got very colourful but that was before the scare and I had to stop taking it. Then, as Amy Winehouse would say, it was back to black. 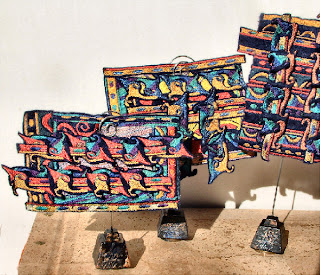 The proofs for the Image to Stitch book have arrived and I'm delighted to say that Batsford have done a really good job and it looks great. Now for the proof-reading.
Posted by Maggie Grey at 09:16

Looking forward to Quiltwow tonight , Good Luck with it .

which half of the horse did you own, front or back? :)

Hi Maggie: Really missed your blogs this week. Just re-reading your Distort book..it really is packed full of great ideas that I missed the first time around. Tried the Adirondack inks (ginger) with UTEE. Not a bad result but not quite as nice as the bronze UTEE. I've got a few others that I will try. Carole