You won't believe this but my kitchen is still out to get me - and it's winning. I thought the same as you, Sarah, that my three things had happened but, as I was cooking the turkey carcass up for stock, the pressure cooker valve gave way in a most spectacular manner. There was an eruption of soup shooting up high in the air like a geyser. Old Faithful had nothing on my cooker hob! It just missed me, luckily, but it did scare me to death. I had to have a brandy to get over the shock (and then another one because if one helps, two can only be better).

Clive was a hero and did all the mopping up but the cooker hood still drips the odd bit of soup down your neck if you lean too far over the stove. We found part of the metal valve in our turkey fricassee later that evening.

Therapy was called for, so Clive devoted himself to a global jigsaw he'd been given for Christmas. I'm not a great jigsaw fan but this was fascinating. It made wonderful vessel shapes as it was being built up and I plan to steal it when it is done and make things with it. Here it is, in its current state of near completion. 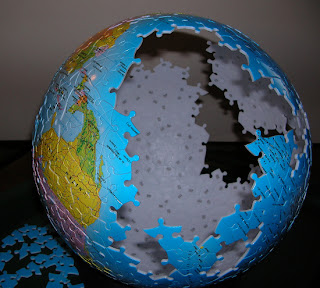 I took a close up as I loved the edge shapes.
. 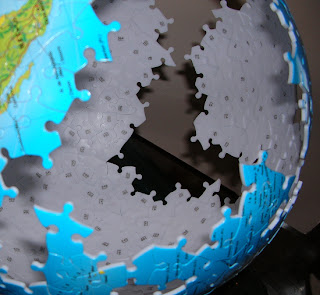 Then I used the close-up pic as a Displacement Map with one of the swoopy Christmas light photos from Thursdays blog. So glad you've had fun with that idea. I love it. 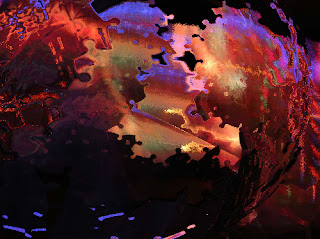 This is fun. I must try it with some other images.

BTW Sharon the swoopy pics are in the next book. Should be here in early June. I have just finished the second proof and posted it today. Mean of them to send it over the holiday.

Linda, thanks for the info on emulsion paints. Ain't the Internet wonderful.

Yes, everyone must go and see the Golden Compass. Then they will make movies of the rest. Our kids are still talking about it. I've never known a film to have such an effect.

I have a posh new Toshiba laptop and am getting to grips with Windows Vista. The machine is very black and shiny, like patent leather. Looks more like something you'd find in a massage parlour than an office (not that I frequent such places).
However, the really good news is that the local laptop doctor has mended my old one and I have spent the day transferring data. I am quite good at backing up important files but I was horrified at how much I had overlooked.
Lessons learned: back up regularly and locate riot shield to use in kitchen at all times.
Posted by Maggie Grey at 15:51

I would have needed a couple of brandies too it my cooker had burst... Good think you are OK!
You're sure your kitchen is not bewitched???
Take care...

I think it must be catching. My kettle suddenly decided to burst into flames this morning suffering from Christmas fatigue I presume. Loved the swoopy pics, am about to go out and try capture my Christmas lights in this way.
Happy new year.

Hi Maggie
I think you ought to leave the kitchen 'thing' to Clive maybe fate's trying to tell you something!!
Well at least you got a brandy out of it! I always thought pressure cookers were a bit dodgy LOL.
Love the globe pic, the map names are particularly spooky!

I know I shouldn't but I've had a laugh at your kitchen nightmare! It must be in the way you tell it.:) The brandy sounds a great idea! I think Sharon's got the right idea. Your displacement map is gorgeous and really shows up the edges.

All the best for a healthy and happy 2008 x I nearly bought one of these jigsaws just before Christmas but chose a crossword one instead for DH. It looks enormous fun and I think I might still indulge if I spot one in the next few days.