Home again - bliss. The Festival of Quilts was as good as ever and we had a great time, but it was exhausting. I have no voice left and suspect that this is not just down to the demo-ing but is also caused by too much chat.
It was a bit traumatic at first as they had changed the original stand we booked, which meant that all the electricals, furniture etc. had been delivered to the wrong stand and it took ages to sort out. It was also wrong in the catalogue which was annoying. We did wind up with a better stand this year, Sue. It's all a bit arbitrary and the stands are very expensive - even at demonstrator rates - so we usually have quite a small one. We don't really have a huge product range to recoup the money but this year we did have Quiltwow to promote and it was very well received. Although it's not here until December (the October issue is a free taster) we had people wanting to sign up already and lots of advertising enquiries. Gave away so many leaflets that we had to photocopy them on the last day. Carol Dowsett (editor) and I are really excited that so many people are so keen. You can see us being excited below. Here are some of our boards with previews of the taster pieces. 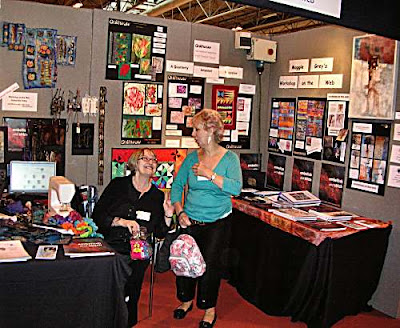 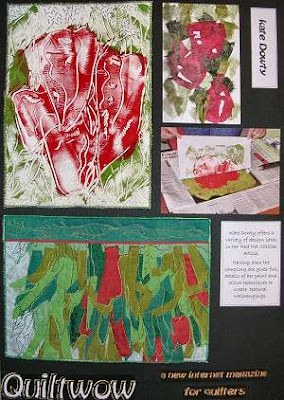 It was wonderful to meet so many bloggers. Julie gave me this dear little card, titled 'A Summer Garden'. 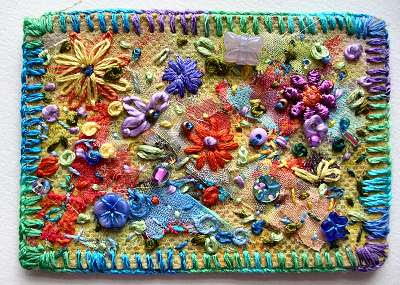 It's all a bit surreal when folk come up and introduce themselves by their blog name. Even more weird when you know exactly who they are! Sara from Kuwait (otherwise known as English Rose) was such a help on the stand and with carrying my workshop stuff up four flights of stairs. I don't know how to tell you this, Sara, but I found a lift!
I'm glad that you thought Clive was presentable, Sue. He still managed to make a hole in the seam of his new jumper by day four. I embellished it together - it worked, too. There were lots of embellishers sold - Janome ran out. People who hadn't seen it in action were quite fascinated and my demos went well. I sold more Embellish and Stitch books than I expected, so that was good. I have finished the background and one of the panels for the Apples and Origins piece and will show you tomorrow. I have also managed to make an organza quilt by embellishing all my sample bits together.

The half day workshop was great but a bit frantic, Leanne. I found that it's not quite possible to fit a whole Summer School into three hours. It was wonderfully cosmopolitan with folk from Denmark, Switzerland, South Africa and the States, as well as Dorothy and Jane, who are both members of Dundee EG but had never met. Dorothy was a hero and helped me pack up at the end. Big thanks.

We were using Moon Shadow Mists and were combining them with Glitz Spritz from the same company. We made books for samples from black envelopes. Envelope books are great as you can slip samples into them, play games with the flaps etc. Clive had punched holes in the tops and we fastened them with wrapped pipe cleaners. I like to spray with the Spritz Glitz first and then with the MS mist while it is wet. Gives a great effect. They also sprayed white tags to see the difference that the background made. You need to set the Spritz with hair spray or pastel fixative. Pics below. 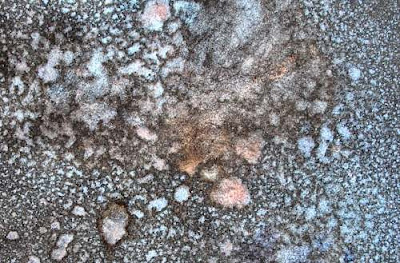 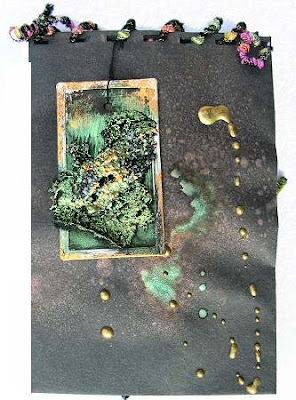 I thought the show was more fantastic than ever with first class exhibitions. Andrew Salmon really does invest in getting the best and he should be applauded for that. Many visitors come for the whole four days and so many come from overseas. Lots from Europe, many from the States so it is a huge draw. The Europeans all say that it is now the best show in Europe. What did anyone else think of this year's show?

So good to be back with the blog - I've had withdrawal symptoms.

I'm blushing that you put my ATC up on your blog. You certainly seemed to be enjoying yourself on Thursday - regrettably I couldn't linger to watch as I was conscious of my friend waiting. I enjoyed the show but you certainly need more than a day to get round. I wasn't sure that I liked the arrangement of the shopping stalls - it seemed a bit cramped. You're right, it was a bit confusing going by the brochure looking for your stand but at least you were nearer the cafe than the loos - just! They moved you up in the world...lol :o))

I hadn't noticed you were moved ! Then I cannot keep numbers in my head....you were easy to find though. The Stand looked great and was very busy. Thanks for putting the boards for quiltWOW on the blog... much easier to see than at the stand.It looks a must have...... Forgot to buy the moonshadow mists... remembered when I got home. Duh! I agree the FOQ is a really good event and Andrew S is to be congratulated.
Pleased you got home safely, if exhausted. Good to see you both.

It would as though you have a great time. Since we moved here to New Zealand it's the only thing I missed, having access to all those wonderful events.

I am going to see if I can try some of those moonmist(glow/shadow) thingies as they look rather fun.

Sorry if people already know this but I found some moon shadow mists at the Ario stand this year. Other stalls may have had them but I only spotted them there.

hope you are recovering, voice and all. I was exhausted after just wandering around for the day! I don;t think I saw everything but I loved Jo Budd's exhibit and the African American quilts - lots of other individual things too, of course. It was lovely to see you both and to watch you at work.

I really enjoyed the show. And your demo was so inspiring!
Thanks a lot.