My RHM is indeed a treasure, Julie, but I fear he is overworked at the moment. Keeping up with the web work on a huge site like Workshop on the Web is more than a full time job - and he does so much else. We always have a giggle when folk ask him if he has retired.

Thanks for the reminder about the 'saynoto0870' site, Linda. I do use it a lot and often find myself dialling in on the international number. It usually works, too.

Had a wonderful time yesterday, as we ran away to London for the day. We both wanted to see the Sacred exhibition at the British Library and kept putting it off. Eventually decided that there was never going to be a good day, so off we went. A fantastic collection of books and objects, beautifully displayed, showing the religious art of the 'people of the book'. Christianity, Judaism and Islam. Amazing. They had the pick of the exhibition displayed in a curtained area with projected images playing over the gently moving curtain. Wow! Here are some very quick sketches. 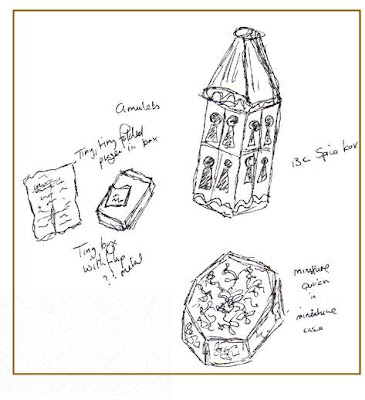 Apart from the illuminated manuscripts from all three faiths, the things that I found most fascinating were:

The latter really got me going. I have noticed before that papyrus distresses in an interesting linear way. This looks as though there are vertical lines behind the script. Here's a very rough sketch.

Made me see a textile with wrapped wooden strips and fragments of paper and stitch. More on this later.

The British Library is such an interesting place and there is a lot to see even when there is no special exhibition taking place. We paid a quick visit to their 'Treasures' section and had a drool. Then we had a good lunch there (another drool). That's usually good value too, for London.

On the tube, going back to the car (we always park at Richmond on Saturdays) Clive suggested that we hop off in South Kensington and go to the Ismaili centre as he'd heard there was something good on there. He was right and we visited the Spirit and Life exhibition. More fantastic books and more in the way of objects here, too. We had a touch of culture fatigue by now but were still so inspired by all the beauty. Both these exhibitions were free so our incredibly inspirational day out only cost us the train fare. 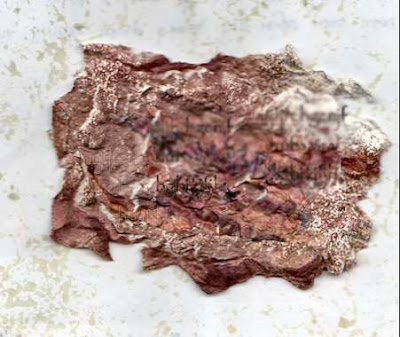 It was slightly spoiled by the mother of all traffic jams on the M3 but we enjoyed our unexpected trip through the New Forest. When I got home, after a stiff caffeine shot, I played with a text fragment. Needs some work but it's a start.

Maggie, you both have so much energy! After a day out like that I'd be flat out, not creating lovey fragments.